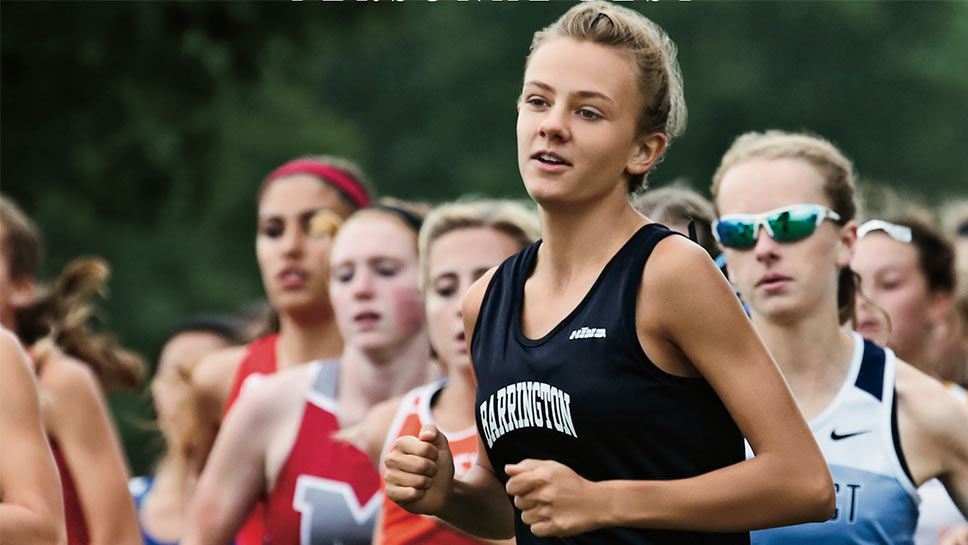 “I actually didn’t do sixth-grade cross country [at Roslyn Road Elementary School], because I thought two miles was too long,” Long says.

Now, the Barrington High School junior ranks among the best distance runners in the state.

At the 2015 Class 3A state girls cross country meet, Long placed fifth (16:43)—the highest individual state finish in program history and the first Fillies runner to break 17 minutes on the 3.0-mile layout at Detweiller Park in Peoria.

She has a way of standing out at a meet—regardless of the team’s uniform choice. Traditionally, Barrington wears its special all-white uniforms at the state meet. But, at the 2016 Palatine Invite, the Fillies unveiled new all-black uniforms.

The 5-foot-4 Long was easy to find. She not only finished third in the highly competitive race, but she also went to the awards ceremony toting Fred, the team’s stuffed teddy bear.

“Her biggest strength is her mind; she’s mentally tough,” Revolta says. “She has a great attitude toward competing. She doesn’t get freaked out about her competition. She wants to run against the best kids in the state to see where she stands. She wants to push herself.”

A tough sectional meet during her freshman season has served as motivation. At that race, the team just missed qualifying to state. And Long missed earning an individual state berth by 12 places.

“I was disappointed,” says Long.

“At that point,” Revolta adds, “she made up her mind [to do whatever it took to being a state qualifier].”

Less than a year later, Long bowed for a medal—fifth place—at the 2015 state meet. Mind made up.

And this didn’t hurt, either. A month after the state race, Long found her way into the national spotlight by taking 57th in a field of 197 elite runners at the Nike Cross Country Nationals in Portland, Oregon. She had qualified three weeks earlier with an impressive seventh place at the Midwest Regional in Terre Haute, Indiana.

“All of my state races have been memorable, honestly,” Long says. “Getting 5th in cross country was amazing. I tend to prefer cross country a little more because the longer the distance, the better for me,” she adds. “But I really like track because you get out there and use some speed.”

In addition to sports, Long takes numerous advanced placement courses. She also participates in the peer ministry program at St. Anne Catholic Community and hopes to be a Barrington Snowflake reader, addressing middle schoolers about drug and alcohol-free lifestyles.

How to address Long? A friend came up with a fun way.

“Then it caught on and now, honestly, a majority of my friends call me ‘J-Lo,’ ” Long says. “I actually like it now.”