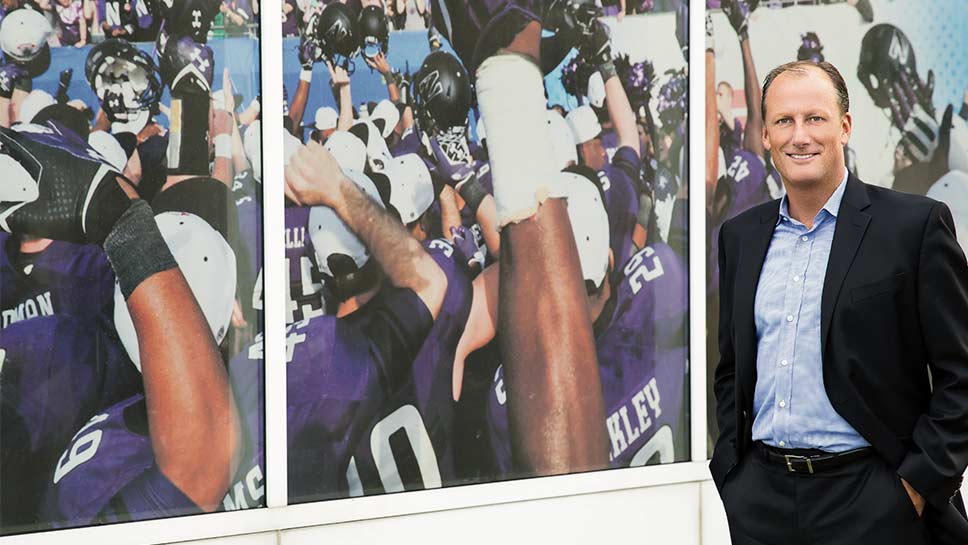 Wally Hayward has just discovered one of his favorite restaurants is closed temporarily, its owners on summer vacation. The quick-thinking sports marketing ace calls an audible. He calls me to make sure I hear it.

“Let’s meet at the Green Bay Café [in Winnetka] instead,” Hayward, 48, says. “It’s a good place, and it’s not too far from Café Buongiorno.”

We meet. We sit. Hayward’s eyes get big, get bigger, get huge. They do that when a sport is on his mind. The sport of swimming is on his mind now. It continues to do laps somewhere in between his cerebrum and hypothalamus.

“Are you watching the Olympics?” asks the husband of Jenny (a New Trier graduate) and the father of two Division I swimming daughters (Riley, a senior at USC, and Hope, a freshman at Indiana University). “Did you see what Simone Manuel [gold medalist, women’s 100-meter freestyle] did? She’s a Stanford girl, a PAC-12 girl. Lilly King [gold medalist, 100-meter breaststroke] swims for Indiana. Great stuff. I can’t stop watching it. My water bug daughters can’t stop watching it.”

Two days earlier Hayward watched the Cubs beat the Angels at Wrigley Field in a night game. He watched the first half of the Bears’ loss to the Broncos in an exhibition game at Soldier Field the following night. His license plates feature the number 34, only the number 34, the number worn by his all-time favorite football player, Bears great Walter Payton. Wally Hayward’s birthday? March 4, or 3-4. He is in the singles and doubles semifinals of the Sunset Ridge Country Club tennis championships in Northfield.

“I never sat around and played video games when I was young,” says Hayward, who grew up in Barrington Hills and was a three-sport athlete (soccer, swimming, tennis) at Barrington High School during his freshman year before opting to play only tennis during his other three years there. “My mom [Sally] always ordered my two brothers and me to go outside and play. We’d play baseball and football and tennis. If we didn’t play any of those sports, we’d make one up and play that. We were always outside.”

Hayward fell head over sneakers for marketing at Northwestern University. He remained mad about sports in college. Marketing and sports. Sports and marketing. They galloped alongside each other, neck and neck, in Wally’s world. Hayward completed a college internship at Lazin Sports Group in Chicago, crystallizing what he wanted to do for a living.

“I married my passions for sports and marketing and here I am, still doing this and still loving this career,” says Hayward, now CEO of W Partners, a Chicago-based sales and marketing company focused on maximizing revenue streams for sports, entertainment and culinary properties. It launched in 2013. It’s a joint venture with the Ricketts family. The Chicago Cubs’ Ricketts family? Yes, that one.

“I love to build brands,” he adds. “It’s a part of my DNA. I love to work with a team of committed, passionate people and come up with innovative ideas for clients, ideas that distinguish them.”

Lazin Sports Group must have liked Hayward’s work. It hired the fresh college graduate in 1990. He worked closely with the NFL Players Association and its executive director, the late Gene Upshaw, and he befriended former Miami Dolphins quarterback Dan Marino and Marino’s Marks Brothers wideout tandem of Mark Clayton and Mark Duper. Stints at BCom3, Starcom MediaVest Group and Leo Burnett followed. He founded Relay Worldwide, a marketing agency, in 2001 and ran it until 2009.

SportsBusiness Journal named Hayward to its Forty under 40 list for three consecutive years (2006-08), recognizing him as one of the leading sports marketing executives younger than 40 in the United States. A Forty under 40 Hall of Fame exists. Hayward is in it, an empty-netter decision.

In 2009 the city of Chicago was a finalist in the derby to host the 2016 Summer Olympics. Hayward served as senior advisor to the bid committee, jumping at the chance to work with insurance titan and family friend Pat Ryan, the chairman and CEO of Chicago’s campaign to host what Rio de Janeiro hosted in August.

The Cubs, also in 2009, sought an Executive Vice President/Chief Sales and Marketing Office to report to new club chairman Tom Ricketts. Hayward landed in the Ricketts family’s mitt. Quite a catch. Some three years later, Hayward stepped down from the position once held by current Chicago Blackhawks President John McDonough and partnered with the Ricketts family to form W Partners. The venture’s long-term Legacy clients for the Cubs and the Ricketts family’s retail entertainment plaza and hotel development include Advocate Health Care, American Airlines, AB InBev, Starwood, Toyota and Wintrust, among others.

“You’re not going to find a more down-to-earth baseball owner than Tom Ricketts,” insists Hayward, in between bites of an omelet (spinach, avocado, cheddar) and fruit. “Not pretentious. Not pretentious in the least. You’d enjoy having a casual breakfast with him. Or a beer. He’s very open. He and his siblings are good people from the Midwest, regular people. The corporate brands we’ve been working since the family bought the Cubs believed in the Ricketts family’s vision for the iconic ballpark and the area around it at a time when our economy was struggling.

“You’ve seen what’s going on down there, the restoration, the enhancements and … the team, it’s playing great baseball,” he adds. “Everything about the Cubs these days is exciting.”

“I have a one-handed backhand,” Hayward says. “You don’t see a lot of players using that kind of backhand today. People always ask me, ‘Where did you get that backhand?’ I learned it from Paul Burrus. I also learned a lot about the game from Coach [McConville]. Mike McConville, to me, was always Coach. I never called him anything other than that. And Paul and Coach weren’t just tennis teachers; they were also life teachers.

“I’m a big believer in having mentors at a young age. Kids need them.”

Many other adults influenced a young Wally Hayward, his father, Tom, among them. Hayward turned to the late Pete Nelson, an ad man, for advice after his college years. To Rich Jernstedt, a communications professional. To giants in other industries.

The former kid, the tennis lifer, still has mentors.