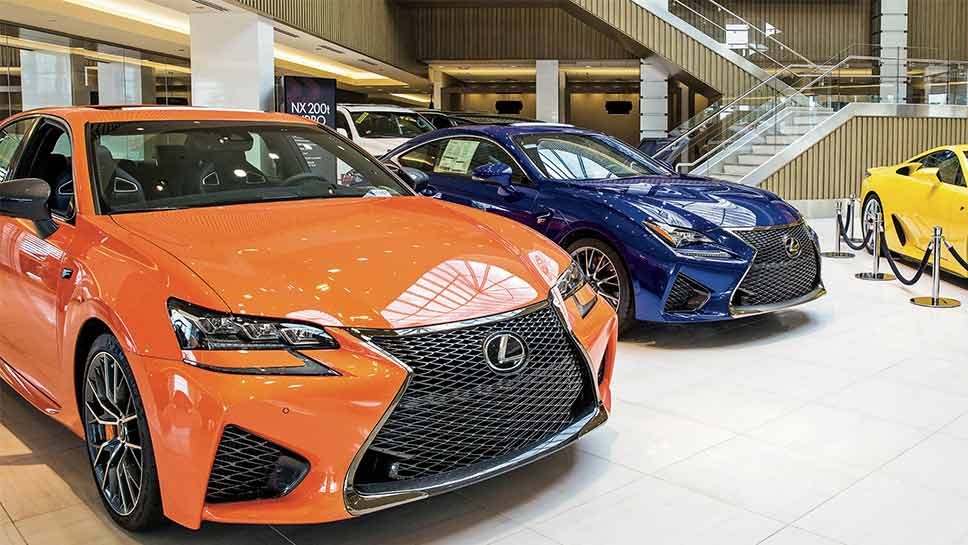 Guests to the all-new Bob Rohrman’s Lexus of Arlington showroom are greeted with a smile. Opened on Independence Day 2015, the world’s largest Lexus dealership at 1510 W. Dundee Road in Arlington Heights provides abundant and exciting amenities on two floors and 190,000-square-feet for the ultimate car-shopping experience.

“It’s not what people expect when they walk into a dealership. It’s like walking into a mall. That’s how big it is,” general manager Marcin Ajdukiewicz says. “(The feedback) actually has been phenomenal. It’s pretty impressive to view what we have to offer.”

Ajdukiewicz has lived in Barrington since 2012 with his wife, Arieta, and two sons, and is a professed lover of Cook Street Coffee. “I go there twice a day,” he says.

Ajdukiewicz joined the Rohrman Auto Group in 1999 as a salesperson. Since 2012, Ajdukiewicz previously was general manager for the Acura dealership that shared its Palatine location with the Lexus dealership before the move.

“I’m just like the store—brand new at the location,” Ajdukiewicz jokes.

“I’m still a boy, but I’m 40. I play with cars and somebody actually pays me for that. I work in the most beautiful dealership. I sell the best product out there. I like working with people. If there’s a dream job, I’ve got it.”

Lexus of Arlington devotes 170,000-square-feet and both floors to more than 1,000 new and 600 used Lexus models. The parts and service department has 48 bays.

Rohrman owns numerous dealerships for numerous brands, but he first started with Toyota more than 40 years ago. Lexus is Toyota’s luxury vehicle division.

“He wanted something special for customers, but also to give back to Toyota and Lexus,” Ajdukiewicz says. “It actually took him seven or eight years to build this. He wanted to build something that really shows his legacy. This is the jewel of his career. He wanted to wow someone when they came in.”

Ajdukiewicz says the most popular amenities are the massage and golf areas and the children’s area with video games and a car-driving game.

“We wanted what consumers want from us,” Ajdukiewicz says. “Despite the gorgeous building, the largest dealership, our quality is customer service. Without it, you can’t keep your doors open.”

In the “Consumer Reports 2015 Car Brand Report Cards,” Lexus was ranked No. 1 overall for the second year in a row.

Ajdukiewicz says Lexus also has added “appeal” to newer models. He already has seen the forthcoming 2017 LC500 and LS models.

“I can put it in one word—insane. That’s how gorgeous they are,” Ajdukiewicz says. “Lexus has always made great cars. Now, they have the sexy-looking, quality car.”