As an Italian travels by motorboat from Venice to Murano, where glass has been created with modest tools and radiant fire for centuries, he offers an unsolicited observation on history that he shares with American travelers.

“When we live in a couple-hundred-year-old house, we live in a new house,” he says. “Italians know their history going back a thousand years—Americans don’t even know what happened in their parents’ generation.”

Perhaps not a welcoming comment, but one that is hard to argue with. History permeates Italy’s best-known cities—Rome, Florence, and Venice—with captivating power.

Rome boasts both the most popular attraction in Italy and one of the oldest structures in Europe. The Colosseum lures about 6 million visitors a year through its travertine stone exterior, whose elliptical wall has been painstakingly cleaned of grime since 2012. Built on a site once owned by Emperor Nero, the nearly 2,000-year-old ampitheater could hold more than 50,000 Romans on marble seats to watch gladiatorial battles and executions.

In another part of The Eternal City, the Pantheon (which means all of the gods in Greek) remains a marvel of engineering. Its top is the widest unsupported dome in world and also features an opening for rain to splash on the marble floor. Buried there is Raphael, the famous painter who died at 37. 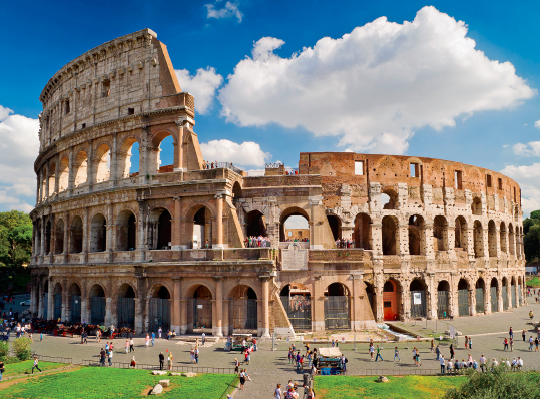 The Doria Pamphilj Gallery features an art collection housed in a centuries-old palace. Magnificent ceilings and ornate chandeliers almost overwhelm the priceless religious oriented paintings by Caravaggio and other masters portraying the Flight Into Egypt and Pope Innocent X (who seems to be looking at visitors wherever they walk). The family chapel is bigger than most U.S. churches.

Stepping outside, the Market of Campo de’ Fiori is the oldest outdoor market in Rome. I enjoy the best sun-dried tomatoes I’ve ever eaten. Black truffles, white truffles, and more are all available for tasting, a reminder that it’s hard to stay trim in Rome, given the abundance of fantastic food options.

And that goes for the hotel I’m staying in as well. Breakfast at Baglioni Hotel Regina, which is perched across from the U.S. Embassy, is appetizing. A simple eggs and bacon order features a half dozen strips of the delicious meat and is graced with top-notch American coffee. Lunch is superb.

Carbonara includes guanciale, pepperino, and parmesan cheese. Those staying in the Roman Penthouse Suite for 10,000-14,000 euros a night (as U.S. Secretary of State John Kerry did) enjoy not only their own private chef but spectacular 360-degree outdoor views of the Sistine Chapel and more.

And what is a visit to Italy without wine?

A jaunt to Rocca di Frassinello Vineyards in Tuscany is eye-opening in many ways.

For one, the venture is a partnership with famous French producer Domaines Barons de Rothschild, whose varieties of Bordeaux—such as Chateau Laffite—are among the best in the world. Then there’s the unique tastingroom table. When one opens a drawer, water pours in. After spitting wine or emptying a glass inside, the liquid goes straight into a drain below the floor, never to be seen again. 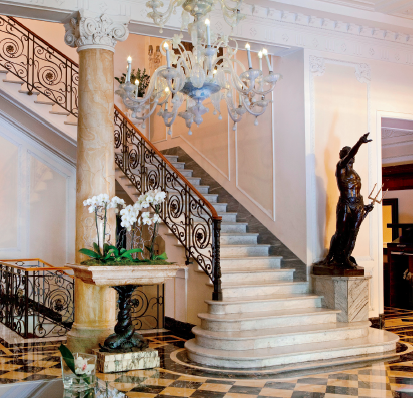 The main building is designed by architect Renzo Piano, known internationally for creating The New York Times Building in Manhattan, among other works. Exterior concrete is exposed as Piano wished to express the notion that a winery is also a factory. Resting below the soil, the cellar is in the heart of the building and is set up so classical music concerts can be performed before an audience of 150-200 as wine ages in surrounding barrels. Though there’s no room for an orchestra in the cave at Enoteca Pinchiorri—a Michelin three-star restaurant in Florence—the choice of vintage wines will make customers sing, especially if enjoyed in the music room above, where friezes of women holding instruments adorn the walls of the hotel Relais Santa Croce. There’s a Montrachet 1978 from Domaine de la Romanée-Conti (Sothetby’s once auctioned off a lot of seven for nearly $24,000 a bottle). Check out the Chateau LaFleur 1961, “one of the best Bordeaux vintages of the century,” according to the sommelier.

For those tired of fine wines, there are Harry’s Bars in Rome and Florence. But those two are tourist traps. The original rests in Venice, a short walk from both Baglioni Hotel Luna (whose oval frescoes in the Marco Polo Lounge were painted by pupils of Giovanni Battista Tiepolo) and the beautiful St. Mark’s Square. Cozy and unassuming, the 84 year-old Harry’s is the birthplace of the Bellini, and no traveler should miss the chance to sip one.

Once the boat arrives in Murano, a short walk to the glassmakers’ shop ensues. Men dressed in blue jeans and T-shirts are armed with long pontil rods whose tips are aglow with fire. They burn oxide to add color to drinking glasses and sconces.

For more than a millennium, glass has been created in this area of Italy, and it seems as if modernity has passed the ancient trade by.

Workers wear little or no protective gear; no schools exist to teach them tricks. Says the Italian man, in a last knowing reference to history, “The best way to learn this art has always been to burn your hand.”