Walking through the door, we were immediately captured by the very modern, very urban atmosphere. The entrance leads directly into a sleek bar with a large flat screen television, a series of highboy tables and tall chairs, and a 3D wave textured wall taking up the north side of the room. The dining room is designated to the south side, with soft, deep couches as booths, crystal chandeliers overhead, and shiny steel accents all throughout the room. A large 14-seat sushi bar runs the length between the dining room and the bar, a flurry of activity behind glass, and a soft blue neon light emanates from underneath the counter completing the contemporary look.

The menu is massive. After consulting two pages of appetizers, we were intrigued by the Bulgogi Egg Roll. It is served openfaced, sliced lengthwise. The exterior crunch speaks very much to traditional egg roll flavor as does the cabbage chew inside. The difference is in the scrumptious sliced rib eye beef marinated in housemade BBQ sauce inside of it. 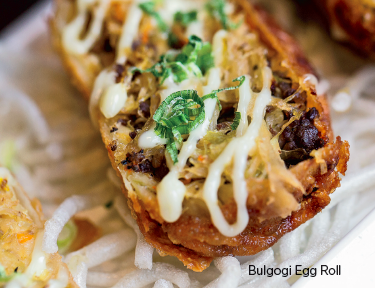 A creamy wasabi sauce drizzled over the top of each is more about visual interest than flavor, but the element of creaminess draws a little more flavor out of the meat. We also tried the Bacon Wrapped Scallops, which carry a surprising amount of heat. The BBQ sauce underneath each scallop really lends a smoky presence to the flavor combining with the characteristic bite of lightly fried bacon. It’s all wrapped up in a spiciness that lingers courtesy of the scallop preparation.

Though we didn’t order it, we had the pleasure of seeing a Sushi Boat for two arrive at a neighboring table. It’s served in an actual wooden boat the size of an entire tabletop. A miniature fishing net hangs from the front, a wooden sail at the back, with a chef ’s choice of 6 pieces of nigiri, 10 pieces of sashimi, a signature maki, and a basic maki spread out over the platter of the deck. It’s incredibly elaborate, and we lamented missing out on it. But it was plain to see that one boat was more than enough for an entire meal and we had more menu to explore. 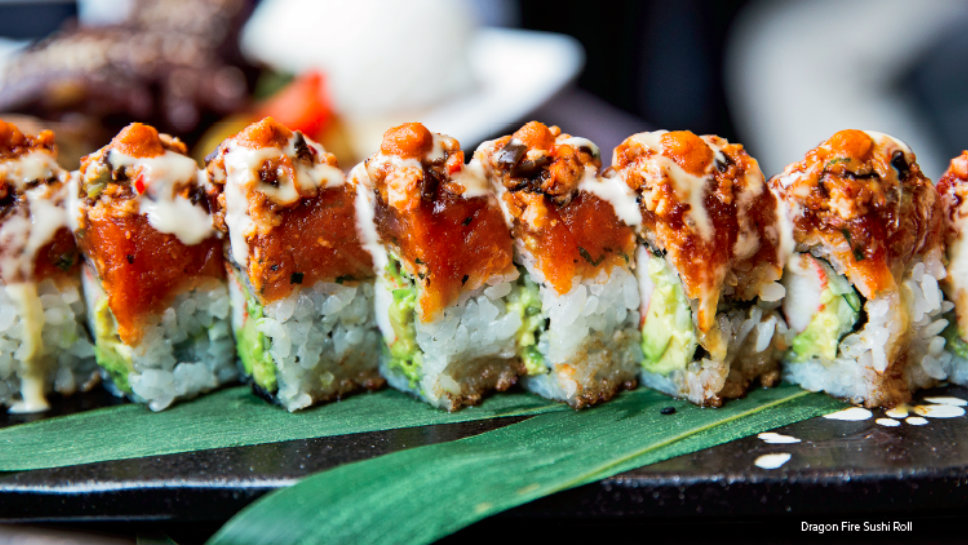 Our foray into their sushi menu began with one of their most popular signature maki, the Dragon Fire. We were warned of the spice factor and told they could make it milder if we preferred, but we went for the traditional preparation. There’s a visible pan seared crunch to the bottom of this roll, with crab, cucumber, and avocado wrapped up inside seaweed and rice and topped with spicy tuna, spicy tako (octopus), and—providing most of the heat—a smear of habanero sauce. The roll is served on top of a combination of citrus mayo and unagi sauce with wasabi, ginger, and soy sauce on the side. It’s awesomely hot. After each trying one, we commiserated over how it actually made our gums burn. We loved it. Of every dish, this is the only plate we completely finished. 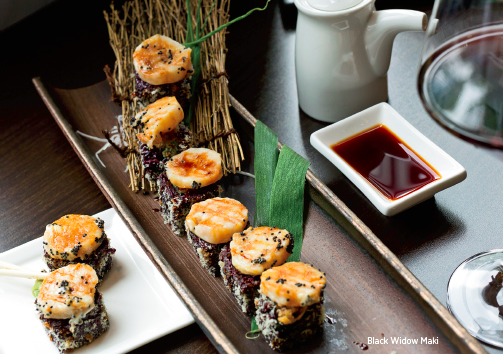 Next we tried the Black Widow Maki. Black rice rolled around lightly battered fresh water eel and avocado topped with a tempura crunch, little sliced pads of scallops, black tobiko (flying fish roe), and unagi sauce. Much denser than the Dragon Fire, seemingly because of the healthy chew of the black rice, and with a slight sweetness from the eel, the flavors are fantastic. Instead of lined up in a roll, the Black Widow was sliced and placed individually across a dark platter so that the scallop slice can be balanced atop. It results in a lovely layered look—black rice, pale scallop, sprinkled with black tobiko, almost formal. This dish was especially receptive to the wasabi and soy sauce sides.

Wanting to try at least one nonsushi entrée, we opted for the Braised Short Rib. Again, the presentation is incredible. The meat is braised with a sweet ginger soy sauce, sliced, and lined up like a sushi roll atop a rib bone and sprinkled with sesame seeds. The meat was unbelievably tender and flavorful. Underneath the bone is the most delectable

medley of sliced vegetables, all of them marinated in soy sauce. The carrot took the marinade especially well, we couldn’t stop snacking on them.

For dessert, we tried the Tempura Ice Cream. It’s a sphere of vanilla ice cream enrobed in pound cake and then flashfried in tempura batter. An exceptionally cold strawberry slice injects a touch of fruit flavor into the ice cream and the whole affair is topped with whipped cream and sliced strawberries. The layer of pound cake accepts tempura’fication exceptionally well and the resulting flavor is like a cross between Mexican fried ice cream and carnival funnel cake.