“My wife and I knew years ago that we’d have to come up with a way to appeal to the millennials,” says Walter, looking around the table, with a laugh. “So we decided to have four brilliant daughters. It’s worked out really well for us.”

Chicago-based Walter E. Smithe Furniture is best known to many as the furniture retailer that marketed itself for years with “you dream it, we build it” jingle playing in the background of the family’s third generation as the face of the business—Walter, Tim, and Mark Smithe. Today, Walter is the company’s president and Mark serves as the vice president and corporate counsel. Tim now tours the country as a public speaker. 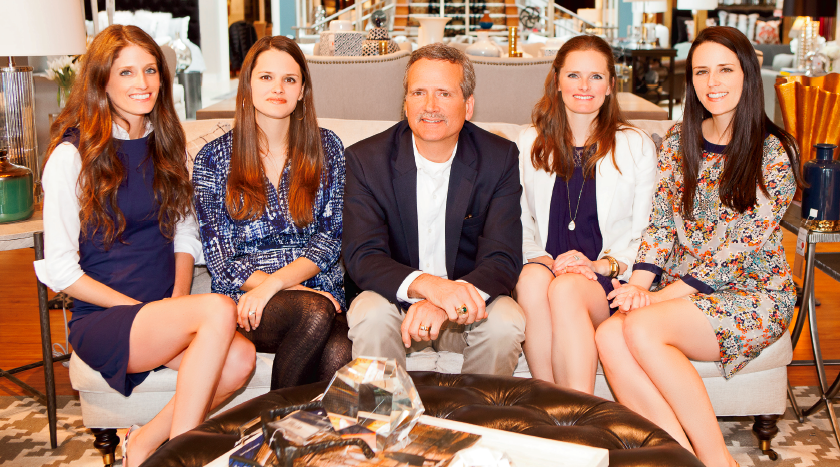 These brilliant daughters Walter refers to are four of his five children (the fifth, a boy, is yet to join the company) are the fourth generation of Smithes to take a leadership role in the company founded by their great-grandfather in 1945. (A Smithe Family fun fact that they love to share is that the four sisters were at Barrington High School at the same time as a senior, junior, sophomore, and freshman. “The school has said that we were the first family who ever did this at Barrington

High School,” Walter says. “Still hard for me to imagine.”)

Over the last 12 years, one by one, Walter’s daughters have been hired on at Smithe in an official capacity. “The girls have all worked elsewhere before coming back to Smithe,” says Walter of his daughters who have had careers ranging from merchandising to advertising. “In family businesses, that’s the only way to ensure a company’s continued success.”Today, Maureen is a buyer, Meghan is the director of marketing, Caitie is a designer at the Oak Brook showroom, and Colleen is the director of advertising. Colleen is the most recent to join her sisters, having been hired at Smithe two months ago. 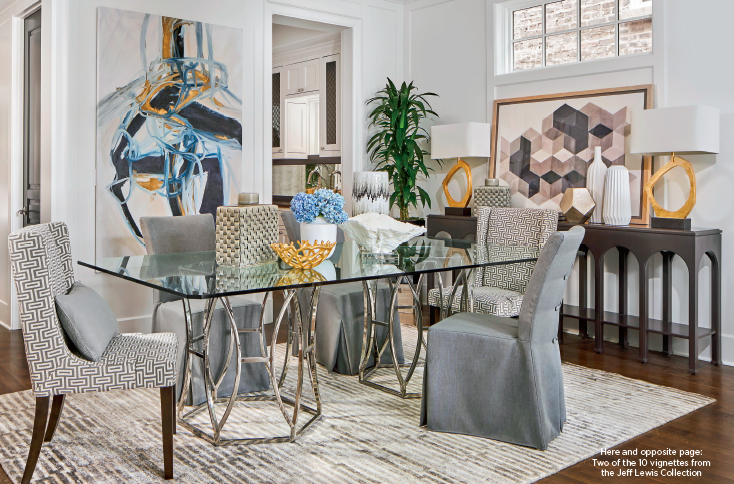 “We like to say we’ve ‘rejoined’ the business because we’ve always been involved,” says Meghan. “When we were about 9-years-old, we would work at the warehouse sales on the weekends. We’d get like a nickel for every tag we clipped.”

“You got more than that,” Walter says. “Maybe a quarter,” Meghan concedes with a smile. “But we always loved going to work with our dad.”

The warm camaraderie among the sisters is genuine and perceptible to even the most casual observer. “They know each other as well as you can ever know anyone,” says Walter. “It was always that way with my brothers. It’s much easier to work together when you start from that place.”

The Smithes, though family, are far from exclusive. They consider themselves fortunate to work among employees who have had long careers with the company—some dating back three decades. “It’s easy for us to separate our family lives from our business lives,” says Maureen. “We can jump back and forth between the two in conversation throughout the day, but at work, we all have jobs to do and we rely on each other to get them done. We have very busy days and there isn’t much time to do things beyond getting the work done. At the office, our dad is the boss and we respect that.”

The fourth generation is now united with a common goal to help the company continue to resonate with new consumers entering the market. “Our goal has always been to give Chicagoans an opportunity to buy beautiful furniture that’s of high quality and made with care—to find people who care about how their home is decorated,” explains Maureen. “But how we reach these people may be a little different than how it was done before.”

“We have to think about why people may not visit our store,” adds Meghan. “Like we’re very traditional or very expensive. One of our challenges is to knock down these barriers and our collaboration with Jeff Lewis taps right into this.”

“Jeff’s style is a coveted look,” says Caitie. “It’s what you see on a Pinterest board. It’s what I think a lot of people are looking for and wouldn’t maybe have thought that they could get it from us. People really want Jeff’s style and we’re the only ones who have it.” 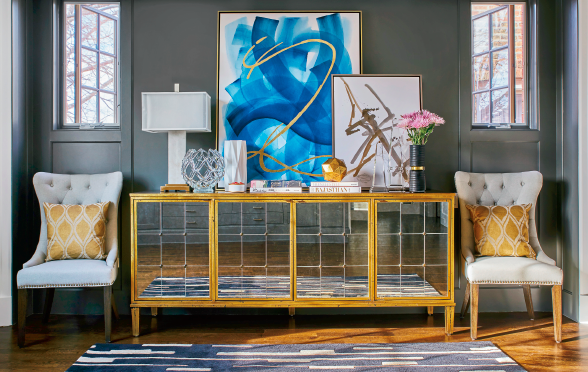 Lewis had his first meeting with the Smithe family eight months ago. Walter was hesitant that this idea would work until he met Lewis himself. “I got dragged in kicking and screaming the whole way,” says Walter. “I didn’t know who Jeff was. It was a tough sell for these young ladies to get me on board with this idea. But at some point, you have to turn it over to the next generation.”

Smithe gave Lewis access to all of its vendors and permission to do whatever it was to make his point-of-view known.

“We worked with them for about a week pulling the vignettes together—he designed 10 of them for us,” says Maureen. “He pulled from all of our vendors, all of our price points, so he could showcase the best of Walter E. Smithe furniture through his lens.”

The furniture collection launched in April, after the Smithes worked closely with Lewis to unveil these curated vignettes—including filming for Lewis’s show Flipping Out. (See Parting Words on page 112 for more details about the Smithes’s upcoming television debut.)

“The thing we keep saying over and over again is that Jeff and his team are the real deal,” says Colleen. “He is so hard working, so incredibly talented. He’s been here three times and there’s never been any ego involved. His last visit was an intense few days. We were shooting still photography and TV commercials—it was incredibly busy. The excitement of Bravo being there—we had to get over that real quick. We had a job to do,” she adds.

The Smithes are optimistic that collaborations such as theirs with Lewis is the way of the future.

“Jeff is a great avenue for reaching people because he does so on a daily basis in what he posts on social media,” Maureen says. “He’s giving us a nice way to reach our new consumer—and their parents.”

When Smithe launched the Jeff Lewis collection, he made a personal appearance one morning at the Oak Brook store.

Maureen brought her 7 .-year-old daughter to observe, giving the fifth generation a preview of what’s to come.

“We really have a passion for this business,” Maureen explains. “Walter E. Smithe has been a part of our lives forever, so when we came back into the fold, it was truly like coming home. And you always have love and passion for home. There’s nothing we want more than to see this company succeed.”