When Amy Hills Baier was set up on a blind date with her husband Bret, their friends who made the match knew they were the perfect pair. “I’m not sure why they thought it would work, but they had a good feeling it would. They did warn me, though, to buckle up— that a life with Brett Baier would be an interesting ride.”

No truer words have ever been said. Amy and Bret first met soon after September 11, 2001. “I had just moved back to Chicago after working as a media planner for Calvin Klein in New York City. I bought a condo thinking I would be there forever,” Amy says. “I really had no desire to meet a guy living on the east coast working in national news.”

But at her friend’s urging, Amy agreed to meet Bret. “Our first date was at a Rolling Stones concert. Bret was such a gentleman. He’s from Atlanta and has that southern charm. We’ve been together ever since.” Even when being together meant commuting long distance from Chicago to Washington, D.C. until the week before they were married 12 years ago.

One of the things Amy has always loved about Bret is his ambition.

“He’s a lot like my father. Bret has always known exactly what he wanted. He’s the ultimate go-getter—high energy, sleeps little, wheels always spinning. He has a calm exterior, but there’s lots going on underneath.” 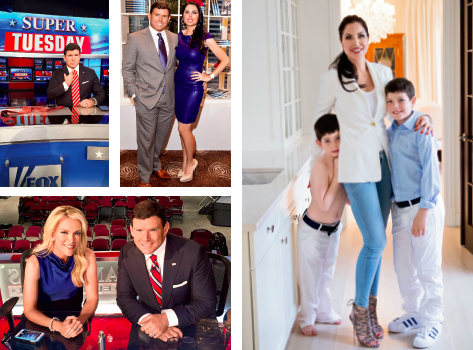 Bret’s first job out of college was as the southeast correspondent for Fox News. “The network was brand new when they asked him to open the Atlanta bureau. He did, out of his apartment, with a fax machine,” Amy says. “When 9/11 happened, Fox asked Bret to get a camera crew and head to New York. He was on his way when the Pentagon was struck, so he went to D.C. instead. While covering the Pentagon, Fox asked Bret to stay on as the National Security Correspondent.

He did and was soon on a plane to the Middle East with Secretary Rumsfeld. Bret never went back to Atlanta. While he was in the Middle East, a close friend found him an apartment in D.C. and Fox moved all of his stuff, even his dirty dishes.

“I’ve always wanted to live in Chicago, but Bret says he would only move there if they move the nation’s capital,” Amy says with a laugh. “I’m a total daddy’s girl with three brothers so he definitely ran the gauntlet during our courtship.”

Today, having lived in D.C. for more than a decade and fully ensconced in its ways, Amy has made a meaningful life for herself and her family.

Occupying much of Amy’s time is her work with Children’s National Medical Center—both with the foundation and its executive board, and she has her oldest son Paul to thank for this. 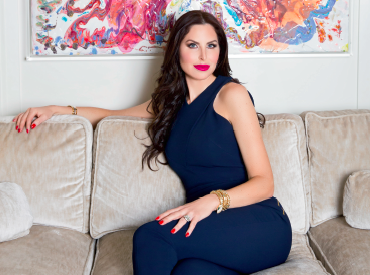 Eight years ago, two days after Paul was born, doctors discovered that he had five congenital heart defects. “Paul was rushed to Children’s National Medical Center before I was even discharged from the hospital after his birth,” Amy recalls. “They weren’t sure he was going to make it. We credit Children’s National Medical Center with saving his life. Bret and I were always involved with different charities, but we really found our calling after they saved our son. We feel passionate about helping kids—no child ever deserves to be sick. We have chaired the spring ball for Children’s National Medical Center twice, including in 2014 when we raised $11 million,” she says. Bret chronicled the family’s journey through Paul’s multiple heart surgeries in his New York Times bestselling book Special Heart. All of the proceeds from the book were donated to various non-profit pediatric heart causes. Bret dedicated the book to Amy, calling her “the most amazing wife and mother to our children and my co-anchor in life.”

While Amy admits that the book was a cathartic experience for all of them and generated a great deal of good for causes dear to them, she confesses it was hard to open their personal lives to the public. “Any time you put yourself out there, you open yourself to the possibility of others scrutinizing you and that’s never fun. I try to always focus on how blessed we are, but you do pay a price being married to someone in the public eye.”

For this reason, Amy is extremely protective of her family and their time. “Bret and I love to go walking together. Sometimes that’s our only alone time because he works so much—especially in an election year, he’ll work seven days a week. We live a mile from Georgetown—and even in the winter—we’ll bundle up and make the walk. It’s great because we can be outside, uninterrupted. It’s such a nice way to talk, get some exercise, and Bret’s not tempted to look at his phone,” she says.

The hectic pace of a life in D.C. gives Amy pause to think of her upbringing in Barrington. “At the core of who I am, I am a Midwesterner.

There’s a simplicity to this where life is about family and being a good person. I tend to gravitate towards others with these same beliefs. I don’t get caught up in any of this—Bret being on TV or living this life in Washington. I feel like I’m raising my kids with this Barrington mentality. It’s what runs through my veins. I hope our children grow up to be very down to earth,” she adds.

Amy’s parents still live in the house she grew up in. It’s a central spot where her whole family comes together for special occasions. Summers tend to be a favorite when all of the cousins can splash in the family’s pool.

“Barrington is such a great place to raise a family, and it’s so nice to see my brothers and my close girlfriends from high school settled there. There’s something very wholesome about it. I think I have a new perspective on this now raising my children in a really fastpaced environment, which is exciting and exhilarating—I wouldn’t change that. My children have been to the White House, they’ve met the First Lady, Presidents, and they’ve been introduced to celebrities.

But there’s something very sweet about growing up in a place that gives you values and confidence in what’s good before you’re launched into the world. That’s what Barrington was for me.”