Sometimes you have to put all of your eggs in one basket and take a bold risk. And that’s just what Barrington’s Mike and Aimee Farrell did when Aimee’s father John Wright approached them with an idea.

“He asked us if we wanted to get in on the ground level of something great,” Mike recalls, “a restaurant specializing in breakfast and lunch. Back then, there was nothing really like this in the Chicago market.”

So Mike and Aimee packed up the life they had built in Oregon, made a few stops along the way to pick up restaurant tables, chairs, and booths, and headed east—to Hinsdale to be exact.

“Hinsdale was our first restaurant, tucked off the road, hidden away from any kind of typical foot traffic. We weren’t entirely sure that people would be able to find us, but they did,” Mike adds with a smile. And the rest, as the saying goes, is history. Celebrating 30 years, 19 thriving restaurants in three states [Illinois, Wisconsin, and Georgia], the family-owned Egg Harbor Café is a strip mall’s dream tenant—drawing in customers steadily each and every day from 6:30 a.m. to 2 p.m. “They call us an anchor,” Mike says matter-of-factly, having recently fielded calls from real estate developers as far as Japan. 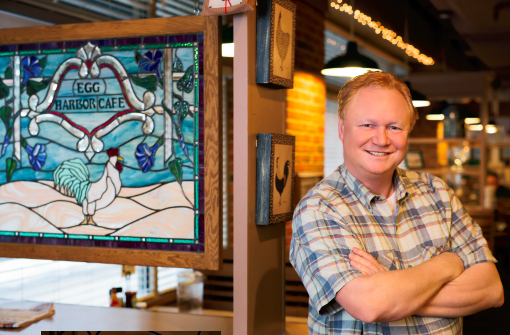 Today, Mike estimates that Hamco Management, Inc., Egg Harbor Café’s holding company that is headquartered in Lincolnshire, employs more than 800 people. “The culture of our company is so important to us,” explains Mike. “We are first and foremost a family business. As we’ve grown, Aimee and I have studied companies that we want to emulate. We want our employees to feel like an extension of our family because that’s truly how we see them.”

Checking in on their restaurants regularly, the Farrells often know every employee on staff. Their retention levels are some of the best in the industry, many employees dating back to the time their restaurants opened. In addition to offering a number of promising career paths, Egg Harbor recently introduced a foundation to help fund continuing education for its employees.

With three decades of restaurant experience behind them, the Farrells still find themselves enthusiastic and engaged in the business that they entered by chance. “No two days are really ever the same,” Mike says, mentioning the changes currently underway across their restaurants including healthier menu items, using only cage-free eggs, and having purified water in the coffee and soda machines. Their hope is to someday use organic produce exclusively (even the ketchup on the table is organic).

But one of the greatest joys the Farrells share is watching their children—the company’s third generation—taking an active role in continuing Egg Harbor Café’s future success.

“We told our kids from an early age that if they had any interest in being a part of what we were building, that they had to prove themselves and actually get promoted from the ground up by the managers they worked for,” says Mike. “In other words, their name, Farrell, actually made it harder on them to get ahead because of the perceived patronage that name implied. So many family businesses fail because the children are entitled to positions in the organizations they haven’t earned.

“We have been blessed, in that both our children, Cassidy and Matt, have had excellent educations,” Mike continues. “Neither of them needed to be a part of the family business, yet they both had the passion and desire to help move this company forward, and we feel blessed that they both chose to do so. Both of them started as hosts, were promoted to servers (during high school and college), and worked their way up into Service Team Leaders and then into management, just like every other team/leadership member. Matt actually was promoted to work with our Hamco Management team over a year ago, and chose to go back into operations to open our newest restaurant in Schaumburg, as a General Manager. We hope to get him back this summer, after he has made Schaumburg a signature of his talents in the field.”

As to how the Farrells ended up in Barrington, Mike recalls the the opening of Egg Harbor Café in a beautiful historic building in the heart of the Village in 1992. “It was early in the morning, still dark outside, and there was a group of high school girls lined up outside the restaurant door, waiting to get in—still wearing their pajamas,” he says. “I remember thinking how great it was that we created a restaurant where parents felt safe to drop off their kids for breakfast. I just loved that energy and knew Barrington is where we should call home.”