Stepping into McGonigal’s is like being transported straight to Ireland, from the stained glass above the door depicting the name of pub in a ropey Celtic font to the McGonigal family crest hanging on a banner in front of the exposed brick walls. The design of the room carries the architectural quirks of the bank it once was—the pediment above the entrance still reads “The First State Bank of Barrington”—but, in every other way, it’s the Irish pub of the old country.

As we made our way through the Happy Hour crowd on a Friday night during a football (soccer to us) match, we took in the lively atmosphere filled with conversation.

From the Starters menu, we ordered the Scotch Egg. Two large hardboiled eggs arrived encased in a thick layer of herbaceous ground Irish sausage, deep-fried. Each was topped with a drizzle of Dijon mustard and a layer of tangy horseradish cream sauce surrounded them. Delicious and incredibly hearty, just one of these eggs could be half a meal.

In the month of St. Patrick’s Day, we immediately zeroed in on the Traditional Irish Fare & Pub Entrees. First, the Fish and Chips. This is the real thing; fresh, flaky fish in thick fried batter wrapped in a little strip of newspaper. The chips, better known as fries in the States, are incredibly buttery, crisp, and addictive. A small serving of mild house-made coleslaw is served on the side. There’s also a side of tartar sauce for dipping, which works very well, but forgo it completely and opt for the table’s bottle of malt vinegar and shaker of salt. That’s the way it’s done at the fish and chip shops, and the tantalizing flavor is alive as McGonigal’s.

The Traditional Corned Beef and Cabbage is a feast. Generous slices of beautifully marbled corned beef are piled atop a stack of cabbage, potatoes, and carrots boiled in the tangy corned beef brine, with a side of horseradish cream sauce. The meat is tender and flavorful, and the potatoes are especially receptive to the salt-tinged tastiness of the preparation. The creaminess of the horseradish sauce really comes through when tried with the corned beef, evoking a fondue cheese richness, though the meat doesn’t need any help in the flavor department.

The Shepard’s Pie was the highlight of the meal, delivered in a small cast iron pan.

Underneath a whipped, mashed potato cap with white cheddar cheese melted atop. It is a perfect mix of ground lamb and beef,

pearl onions, carrots, peas, and herb gravy. Each element combines to create irresistible comfort food warmth. The savory meat and gravy receive a touch of earthy sweetness from the fresh vegetables and play opposite the blissfully buttery, cheese-topped mashed potatoes. 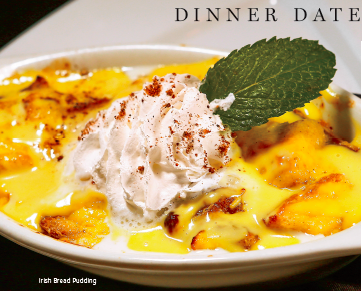 For dessert, we dove into the Irish Bread Pudding. It’s a wonderful mix of cinnamon, vanilla, and nutmeg flavors and disparate textures with the hearty bread playing against the light, insistent warmth of a whiskey cream anglais-whipped cream. The whiskey bite is a pleasant bottom note underneath the sweetness of the custard and the chewy satisfaction of the bread. It was gone before we knew it.

McGonigal’s Pub is only one of three environments all connected to the same kitchen.

The Annex is a premier, upscale cocktail lounge with it’s own entrance and a sleek, modern vibe. Upstairs, they host private events and a rotating selection of live Irish musicians and bands at the Moore Pub.

Coming up on St. Patrick’s Day, you’re going to see what it’s like when McGonigal’s goes all out for the Barrington Celtic Fest. They put up a 100-foot tent in the parking lot with live music, Irish dancers, and Irish pipers. All three venues inside McGonigal’s— the pub; The Annex; and Moore’s Pub upstairs, where there will be more live music—will be firing on all cylinders Thursday through Saturday. Not surprisingly, it’s their biggest three days of the year.

Although, if you want to see McGonigal’s hopping, you don’t have to wait for St. Patrick’s Day. Just check their website for the next time Manchester United is playing and pop in for a bit o’ craic!