Martin McLaughlin, the Village President of Barrington Hills, announces his desire to represent the 26th district in the Illinois State Senate.

“These guys that have been in state government for 15 or 20 years, in my opinion, they’re part of the problem,” says Martin McLaughlin, the Village President of Barrington Hills. “That’s not political. The status quo is not working in Illinois. They’ve got to start coming to solutions; otherwise, the state is going to continue to decline in population. We’re one of only three states in the country with a net declining population. How can you continue to grow government spending when you have less people to serve? That’s a good question, I’d like to ask that if I’m fortunate enough to be elected to the state senate.”

Two years into his time as the Village President of Barrington Hills, McLaughlin seems ready to see if he can apply some of the philosophies he’s brought to serving his community down to Springfield. In September, he announced his intention to run for the

Illinois State Senate seat that will soon be vacated by Dan Duffy of Lake Barrington. 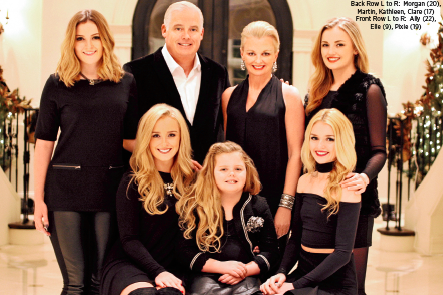 Speaking to McLaughlin, it seems like gridlock is the thing about government that irritates him most. Reflecting on his initial months in office as Village President, he speaks of untangling both a three-year legal battle with Barrington Hills Police Union and an ongoing 13-year lawsuit brought by Sears over the dimensions of a proposed business park off of Route 59 in Hoffman Estates, which he says had already cost the community more than $1.2 million in legal fees. Putting an end to those two ongoing legacy problems came through stepping around the lawyers to have involved discussions with the people on the other side. “It had been going on for years,” says Paula McCombie, Village President of South Barrington, who was also battling the Sears lawsuit. “We put our heads together and came to a solution. Marty’s really good at listening, analyzing a situation, and presenting clear, thoughtful ideas.

I think that Springfield could truly use his ability level.” “It’s done by having common ground and negotiating with people who understand you’re all trying to get to the same place,” says McLaughlin. “It’s okay to disagree, but let’s get in a room and talk about the numbers behind it. Let’s not let extreme opinions—which a lot of times are based on emotion—drive the agenda. I’m a very numbers-oriented person. If the numbers don’t match, I have an issue with that.”

His skill with numbers has served McLaughlin well in the business sector before he ever became involved in politics, managing a very successful investment advisory firm. He’d already spent many hours in a non-political capacity helping municipalities, public departments, and corporations with their investment portfolios trying to garner the most out of public or corporate assets before he decided to put his philosophies into practice for the local government where he and his wife, Kathleen, continue to raise their family.

“We have five daughters and we have dinner table discussions all the time about how it’s really sad how many people are leaving Illinois,” Kathleen says. ”We both grew up here, he’s got 25 years of experience with pensions and investments, and he’s really proven to me and the village that he’s going to do what he sets out to do. So, I hope he gets the opportunity to try and implement that at the state level.”

“People say you can’t change the state, but I reject that,” McLaughlin says. “[Governor] Rauner was sent down there to do something very different than what’s been happening. He needs help. He needs people who are willing to stand beside him. The state pension plans are the biggest problem. Everyone says, ‘You can’t diminish or impair the pension benefit.’ I’d like to worry about the property owner funding that pension benefit as much as we’re worrying about the recipients. That’s the battle for the future of the state of Illinois. The state needs to radically look at how it’s operating and that’s going to require people who are less interested in the job itself than in trying to garner a solution. It doesn’t have to be me, but people like myself who’ve operated businesses and will bring those experiences into government.

I think it’s time to get people like myself off the sidelines and engaged to provide a fresh perspective and solutions.”