North Barrington’s Yvette Klobuchar never fancied herself as much of a writer. So to have written the #1 new release on amazon.com in late November 2015 came as quite a surprise.

“I’ve been a designer my whole life,” explains Klobuchar, who worked alongside of her mother Mira Horoszowski at Mira Couture for nearly 30 years. Horoszowski had opened a small bridal shop in the suburbs when Klobuchar was just a child, but the duo grew the business into the flourishing Gold Coast bridal destination it was at the time they sold it in 2014.

About 10 years before the sale, Klobuchar realized her day-to- day life in the bridal business, as well as her years as a single mother with a young son, was perfect fodder for a book. Having been approached by a network interested in doing a television series about the trials and tribulations of working in the wedding business, Klobuchar knew others felt the same. 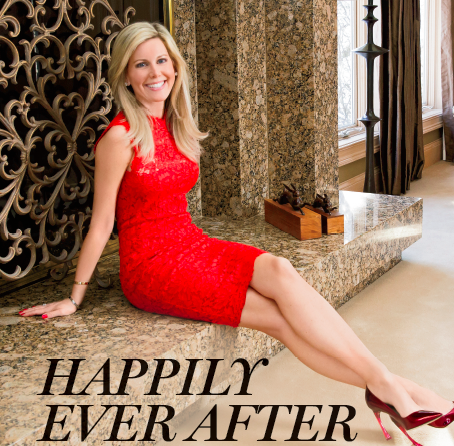 “I didn’t want to write a tell-all that exposed only the crazy, bad things that happened in our shop,” she explains. “The television producers were mostly focused on the drama. But the truth is that my mother and I experienced so much joy. We have loved our clients—many are like family and I feel protective of them. But I did want to give a peek at some of the funny things that have happened with our emotional brides.”

For example, Brides Unveiled opens with a hysterical woman pleading to be let into the bridal shop five hours before it even opens. She had been broken up with the night before—on Valentine’s Day—after dating this certain man for seven years. She had no wedding date, no groom, and no need for a dress.

“I didn’t have to look far for material,” the petite, blonde dress designer explains with a laugh. “But I did want my characters and their portrayals to be bigger than life and over the top,” especially words by Ann Marie Scheidler / Photography by robin subar the portrayal of her mother who Klobuchar insists only loosely inspired the mother character in her book. “I wanted to have fun with my writing. Writing was a bit of an escape from what I was living everyday. It was therapeutic to recount something that happened in the shop but tell the story the way I had wished it had happened.”

It took Klobuchar more than 10 years to complete Brides Unveiled, even though her father had taught her the art of storytelling from a young age—always having been wildly creative himself.

“When I first started writing, the timing wasn’t right,” Klobuchar says. “I was so busy with work, expanding our brand, and raising my son Alec that I couldn’t make the commitment to writing.”

But with her son’s encouragement, and the support of her parents and new husband Lou to find her voice and embrace it, Klobuchar returned to her unfinished pages after she and her mother sold Mira Couture. “I wrote Brides Unveiled as a way to pay tribute to my parents Bogdan and Mira Horoszowski, and our challenging, but exciting, journey. What I love about the book is that it’s not only about the hilarious store shenanigans surrounding our brides. It’s also a meaningful story about the struggles of a young, single mother and business owner that will hopefully inspire faith, healing, and loving oneself,” she says. “This book was also a way for me to achieve closure on a very large chapter of my life, but in a way that will keep our story alive.”

These days, Klobuchar is out marketing her book and enjoying what this involves. “We had 400 people at our Chicago launch party,” Klobuchar says. “It was the most incredible evening, filled with love, surrounded by the people who had been part of the business my mother and I had built. Never in my wildest dreams could I have imagined that me, as a little girl who only spoke Polish, who lost every spelling bee, would write a book that people would want to read. It was an evening I’ll never forget.”