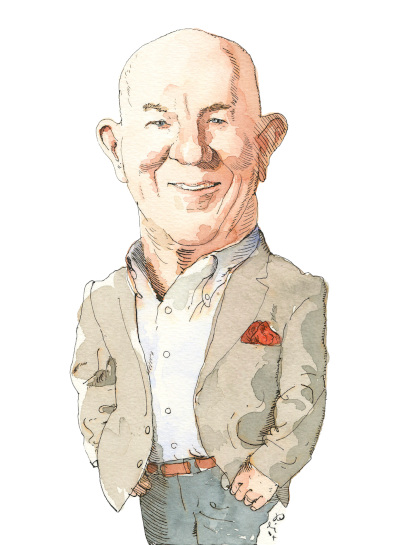 Glenn Keefer’s stint as a commercial fisherman on a lobster boat some 52 years ago did not exactly go swimmingly.

The vessel, skippered by a rookie captain, caught fire and sank 30 miles off the coast of Montauk Point, New York.

“I needed the job to pay for college tuition,” recalls the likable, forever-young Keefer, who had worked, in 1969, as a 14-year-old busboy at an Amityville (NY) restaurant owned by former New York Jets defensive tackle and Super Bowl champion Gerry Philbin.

“That didn’t last very long, either,” Keefer, 67, says. “I was on a roof and accidentally dropped a two-by-four.”

What broke the piece of lumber’s fall: a chunk of Keefer’s foreman, unfortunately.

“I got fired—the only time in my life that I got fired,” Keefer says.

The fishing industry’s and carpentry’s losses became steakhouses’ big, juicy gain. Keefer began his Chicago restaurant career in 1980, when The Palm-Chicago’s first team hired Keefer, then 24, to bartend at the Gold Coast restaurant.

He worked there for 12 years and emerged as an enterprising Steak Man. Keefer—a Northfield resident since 1996—opened Chicago’s Ruth Chris Steak House in 1992 and was later promoted to vice president of operations for the largest of the company’s franchise groups.

He then teamed up with his brother, Richard, and good friend Jimmy de Castro to launch Keefer’s Restaurant in 2001. Glenn Keefer steered the steakhouse as managing partner and was named “Restaurateur of the Year” by the Illinois Restaurant Association in 2012.

The Food Network ranked Keefer’s “Best of Chicago for Steak.” Catholic Charities also honored the popular River North steakhouse after Keefer’s Restaurant served more than 30,000 meals to the homeless; Glenn Keefer received the organization’s Dennis F. Kelly award, given to a member of the Board of Advisors in recognition for their service to the poor.

Year 2020 arrived. Keefer got a call from Ryan O’Donnell, a former Keefer’s Restaurant employee who created Ballyhoo Hospitality with his wife, Anna, in 2018. Ballyhoo restaurants—located in Chicago and along the NorthShore—champion the qualities that make a neighborhood restaurant great and offer thoughtful, authentic food and drinks.

“Ryan told me, ‘Let’s open a steak restaurant together,’ ” Keefer recounts. “I’d been itching to return to the restaurant industry when I heard from him. But what made the opportunity even more appealing to me was the thought of working closely with Ryan, who has a culinary degree and whose greatest strength is knowing what is needed at a restaurant in order for it to succeed.

“I’m telling you, Ryan’s culinary skills separate him from a lot of other operations. He’s also a savvy entrepreneur and a very good businessman, with a great heart.”

Keefer joined Ballyhoo Hospitality as a partner of Sophia Steak-Wilmette and Pomeroy, a French bistro in Winnetka inspired by the distinctive cafes of France.

Back in the steakhouse game, rarin’ to go.

About that Cowgirl Ribeye he inhaled at Sophia Steak-Wilmette, not too long ago …

“It made my palate tingle,” Keefer says.

He’s also a partner of Sophia Steak-Lake Forest, which opened its doors to guests last year, emphasis on guests.

“It’s all about the people, when it comes down to the success of any restaurant, and the Ballyhoo people formed a tremendous team,” Keefer says. “The managers, the servers, the cooks, everybody. I can’t praise all of them enough. It also helps that Ballyhoo Hospitality has always been committed to authenticity.

“Authenticity,” he continues, “is the key. Pomeroy is a French bistro, and ours looks like one and features the kind of fare that outstanding bistros should offer.”

Keefer and his family dine at a North Shore Ballyhoo spot at least once a month. He and his wife, Chris, raised Sean and Anna.

“My wedding day (in 1983) and the day our children were born are the best days of my life,” Keefer says. “Nobody is more important in my life than my wife and our two children.”

No item in his life tops his bicycle. An avid cyclist for 42 years, Keefer pedals for exercise, peace, and the chance to focus. He churned 20 miles on his bike on … December 15. Outside.

In New York, where he grew up on Long Island and attended Massapequa High School, Keefer, after suffering a serious head injury in a school hallway, had to be transported to a hospital in a car owned by an MHS football coach/wrestling coach/driver’s teacher named Alex Baldwin.

A concussion forced Keefer to rush away from football before his junior year. The son of a high school principal (Earl) and elementary school teacher (Katherine) graduated a semester before most of his classmates did.

Keefer majored in religious studies and competed as a lacrosse attackman at St. Lawrence University in New York.

“My father had a kidney transplant and ended up living for 26 more years,” Keefer says. “But there was uncertainty there, right after the transplant. When he was sick, it was time to giddy-up for me. I had to find work and save money for tuition.

“I remember, in summers during my college years, stuffing all of my belongings in a pillowcase while searching for jobs.”

“I liked to work then; I like to work now,” Keefer says. “I get up at 5:30 a.m., most mornings, and read our restaurant reports from the day before. I look at those to get a sense of each restaurant’s pulse.

“I also like to work out now, and not just by riding my bike. I can out-grunt anybody.”