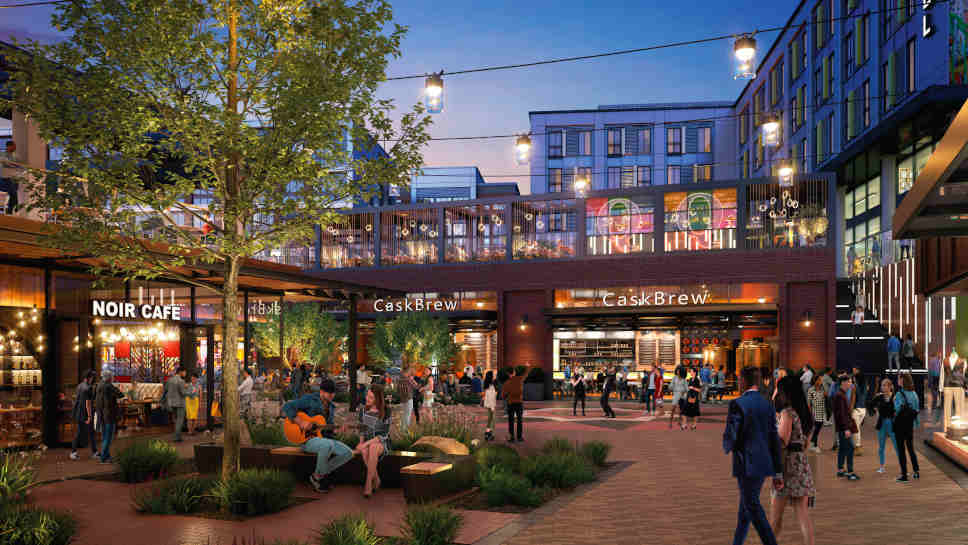 A rendering of the new Westfield Old Orchard mall, which will be expanded in the coming years.

Watch just about any teen comedy from the ‘80s or early ‘90s and you’re likely to see a scene or two that takes place in a mall. Back before eBay and Amazon and Internet commerce ruled the shopping world, malls were centers of commerce and communities, and Hollywood knew it.

Much has changed in the ensuing decades. The Internet is filled with slide shows of “dead malls,” empty, rundown structures that have been abandoned by retailers and shoppers alike. But while thousands of malls across the country have shuttered, some developers are reimagining the mall as we move through the 21st century.

A prime example of how malls are being reshaped for the future is Westfield Old Orchard in Skokie. Westfield survived the Internet commerce explosion and, more recently, the COVID-19 pandemic, and the shopping center continues to thrive. But some see room for growth. A lot of room.

Paris-based Unibail-Rodamco-Westfield (URW) owns and operates 80 shopping centers in 12 countries, including 21 in the United States, Westfield Old Orchard among them. In December, the company announced a significant expansion of the center that will include additional retail, modern residences, chef-led dining, entertainment, gourmet markets, and upscale health and wellness facilities.

“Westfield Old Orchard already provides an exceptional experience for our customers, local residents, and our office workers,” says Geoff Mason, executive vice president of operating management and development for URW in the U.S. “Our bold new vision for the center will dramatically enhance its offering and further establish it as the preeminent live, work, shop, and play destination on the North Shore.”

URW Senior Vice President for Development Stephen Fluhr, who is spearheading the Westfield development for the company, says that while the mall business over the years has taken some separate paths depending on where the malls are located, some malls are just destined to become something else entirely. They may retain a little bit of retail, but the real estate may still be useful for something, not just a mall.

“On the other side of the equation, we have these flagship retail centers like Old Orchard that have never really been in jeopardy at all, Fluhr says. “We continue to benefit from some of these other consolidations. Retailers, entertainment venues, and restaurants are seeking locations like Old Orchard that are these flagship fortress destinations that continue to get stronger and the vision that goes along with that is we’ve got plenty of space for retail.”

A lot of people have grown up going to the malls and have memories from spending a lot of time in shopping centers, including Fluhr himself, and he sees the plans for Westfield Old Orchard as continuing the connection people have with physical shopping centers.

“We’ve actually been talking about it for a long time. The ability to do what we’re doing now is the result of many years of internal efforts in the industry to line up ownership and line up rights,” he says. “Malls are pretty complicated entities in terms of who owns what and agreements between the department store and the landlord. So, it’s taken some time to get those untied and get them all right to set up what we believe is the next right step in the evolution of the malls.”

The Old Orchard project will focus primarily on the north end of the mall where a new Bloomingdale’s has already opened—under the “Bloomie’s” brand—and the opening in 2024 of the old Lord & Taylor building, which will be divided up into four sections for different, yet-to-be-named retailers.

“We really felt it was primed from a palette perspective at the mall to say, ‘This is a great area to start to really redefine and create a new destination on the side of the mall that is a little bit different’,” Fluhr says. “Of course, we can add the residential up top, and there are other uses too that we look at over time. Hotels are great, medical offices are great. There’s a series of complementary uses that makes sense to have on-site because people that either live there or work there or come to use the services will also benefit from having them all there.”

Fluhr says the consumer experience is really the point of the redevelopment of flagship centers. URW is a little further ahead than Westfield Old Orchard in developing Garden State Plaza in Paramus, New Jersey, and is deep in development of a similar project, Westfield Montgomery, in Bethesda, Maryland.

“What we want to do and what we want to create makes them all even better in terms of what we’re bringing,” Fluhr says. “With these projects, we seek out best in class co-developers. We’re retail developers and we want to partner ourselves with somebody who is the best multifamily residential developer out there so they can bring that expertise and we can do it together.”

Maybe there is life after Orange Julius after all.