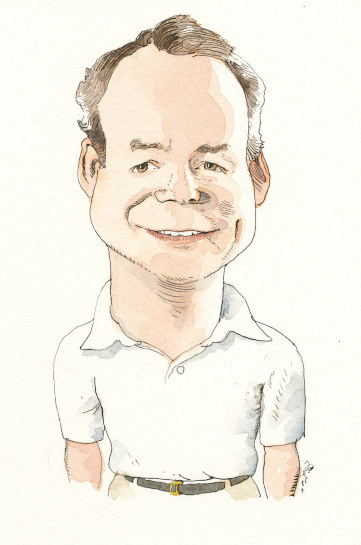 And perhaps, like any 13-year-old boy, hope to become cooler than Joe Cool.

“Many of us would also head out to roam around Lake Forest,” Hender recalls. “That’s what we did at ‘Hot Spot’ events at Gorton. Then we’d make our way back to Gorton, where our parents picked us up.

“We had fun at Gorton. Gorton was a big part of my childhood, a special place. Time spent there created many fond memories.”

Count on the grown-up Hender to stick around for the entirety of an entirely different kind of Gorton event on February 9—and drive himself to his home in Lake Forest afterward. The Center on Illinois Road plans to show The Loyola Project, a highly compelling, straight-shooting 2022 documentary about the 1963 NCAA champion Loyola University-Chicago men’s basketball team.

It was underwritten by Northwestern Mutual. Early last year Hender and one of his mentors, Joe Guin, co-founded Compass Financial Partners (CFP), a Northwestern Mutual private client group that moved from Vernon Hills to Lake Forest last month and reduced Hender’s commute to a three-block stroll.

The 88-minute film revisits the Game of Change—Loyola vs. Mississippi State, in an NCAA regional semifinal at the height of the civil rights movement—and chronicles how Coach George Ireland’s harassed, resolute Ramblers broke racial barriers and changed basketball forever.

The Gorton Center event, in essence, will serve as the unofficial tip-off to CFP’s community presence in Lake Forest.

Patrick Creadon, who directed an ESPN 30 for 30 documentary, directed The Loyola Project, which weaves archival footage and modern-day interviews and provides inspiration in the fight for equality. Former Loyola shooting guard Lucas Williamson co-wrote and narrated it. Gorton-fan-for-life Hender picked Gorton to present it.

“It’s an ideal setting, a gathering place in the heart of the community,” says Hender, a Gorton Center board member for nine years, including the two years (2017-2019) he guided it as chairman. “The John & Nancy Hughes Theater’s cinematic technology is fantastic. Why not show it there?

“It’s a Chicago story and it’s an inspirational story,” he adds. “Those who see it will come away feeling good, realizing how far we’ve come as a nation since the 1960s. But there’s still too much divisiveness in the U.S., too many people pushing for discord. I want to push the other way and celebrate the similarities all of us share.

“I want a world that’s colorblind.”

Hender has been a true-blue Lake Forester, through and through. And through. He dated his future wife and Northwestern Mutual colleague, Alana, for three months at Deer Path Middle and took her to the senior prom at Lake Forest High School in 1992. But they were good friends first, after connecting as 8th graders in the DPMS cafeteria.

“I remember talking with her as the jukebox played a Men Without Hats song,” says Hender, who wrestled for two years and served as a varsity soccer captain at LFHS. “You know the one… the song they played over and over.”

Maybe it was The Safety Dance.

Or Pop Goes the World.

Alana works as a Northwestern Mutual growth and development coach, who helps new advisors at the firm.

Brody shot his first hole-in-one at Onwentsia Club in Lake Forest, a week before his father aced a hole at Sandy Valley Golf Resort in Nekoosa, Wisconsin.

Anything you can do, Son, I can do the same.

“I love the people of Lake Forest, first and foremost,” Mr. Hender says. “They’re great people, with great values. I made a lot of friends at Gorton (as a child and as an adult) and learned a lot in my years as a Gorton board member.

“I also love the beauty of Lake Forest, the beach, everything about it.”

Hender—who traded at the American Stock Exchange in New York and at the Chicago Board Options Exchange, before joining Northwestern Mutual in 2011—has spent a third of his life, at least, at Bruce Springsteen concerts (he’s attended 20) and another third of his life in, on, or near water. Tim and his father sailed a J/46 named Windrush in a boatful of Chicago Yacht Club to Mackinac races. Tim water skis, surfs, and swims when he’s not running or snowboarding.

But he makes splashes indoors, too, as a private wealth advisor. Compass Financial Partners’ mission is to help families navigate their journeys to financial security. Service-focused CFP is recognized by Northwestern Mutual as one of its top wealth management advisory teams in the country and is a founding member of the FORTUNE 500 company’s Private Client Group—an exclusive selection of advisors who provide sophisticated advisory strategies for high-net-worth clients and their families.

“Building relationships is my favorite part of work,” says Hender, who strives to fill each day with purpose, prayer, positivity, and patience. “Friends become clients; clients become friends. At Compass we’re good at making a difference in people’s lives. Every day I wake up with the aim to serve others and make the world a better place.

“All of us can do that, even in small ways, repeatedly.”