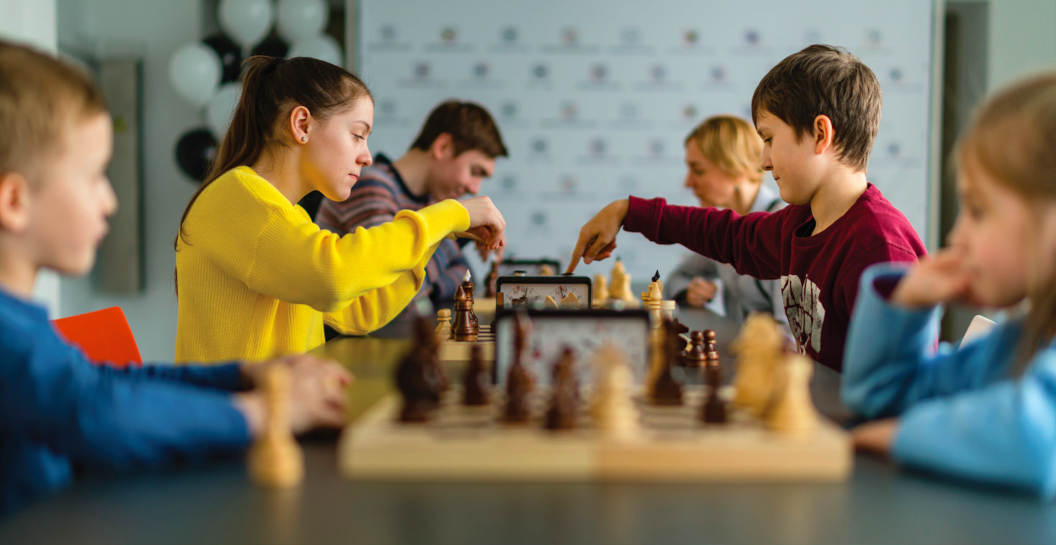 There was a time when chess may have been considered a game of the past, relegated to the wise old intellectual or elite young protégé. But thanks to the popularity of such Netflix television shows as The Queen’s Gambit, interest is spreading to even the youngest generation.

Patti Ruiz, program manager for the Community House in Winnetka, says she introduced a chess program during the height of the pandemic in October 2020—in part because parents were asking for it.

“The school district had a chess program but stopped running afterschool programming during COVID,” she explains. “During the pandemic we had up to 16 kids in the program. Now that the schools have started running it again, we usually get about ten kids a session.”

When looking for appropriate instructors and program, Ruiz turned to Alice Holt, program director for Chess-Ed. Holt and her team have been helping people of all ages to “master” the game of chess for more than 20 years.

“Our goal was to bring chess to students in order to increase critical and analytical thinking skills, plus have fun with the sport,” she says. “Throughout the years, we have brought the ‘sport of the mind’ to over 100,000 students through school enrichment programs, workshops, and chess camps. We began working with the Winnetka Community House over the past several years and it has been fun to see the growth in the sport continue.”

One the reasons Holt thinks chess is more popular than ever is the influence of pop culture and the availability to play online.

“It has grown to be the most popular sport in the world as age is not a barrier to its enjoyment and competition,” adds Ruiz, explaining that chess improves critical thinking, improves intelligent decision making, and can be played socially and competitively for the rest of one’s life. “We offer chess for students and chess for adults as well through Winnetka’s Community House.”

Shiva Maharaj, one of Chess-Ed’s top trainers and coaches, loves sharing the success stories that have come out of the Winnetka program as well as the group’s other programs on the North Shore.

“Numerous students have gone on to attend Harvard, Yale, MIT, Stanford, and University of Chicago,” he says. “It is a great joy watching the evolution of the students who go on to have a game that stays with them for life.”

Ruiz shares his enthusiasm, listing off some of the program’s most impressive alumni.

“Jacob Furfine began with Shiva at age 3 and now is at MIT. He became a Master at a very early age of 13,” she says. “Jack Curcio also reached Master strength and has now graduated from University of Wisconsin and working with the financial areas of business. Of course, Shaina Berman is an up and coming female Master.”

Maharaj, a certified international coach by the world governing body of chess (FIDE) and northern Illinois Coach of the Year in 2016, taught himself the art of the game at age 6.

“I read the book Chess for Children by Raymond Bott and Stanley Morrison and learned the basics,” explains Maharaj, who has since coached more than 10 students who have gone on to be chess Masters. “In my opinion, playing chess gives students a decisive advantage over non-chess players in developing critical thinking skills. Chess is a game of technical and psychological factors. Coping with loss, patience, and determination—together with calculation, imagination, and creativity—are extremely useful in real life and academics.”

However, he is also quick to note the advantages for the older players who have kept the game alive.

“Seniors derive a sense of engagement, community, and excitement when keeping their minds active,” he says. “We offer classes for all ages at the Community House and there is benefit for all.”

The Community House is located at 620 Lincoln Avenue in Winnetka. For more information, visit mycommunityhouse.org.