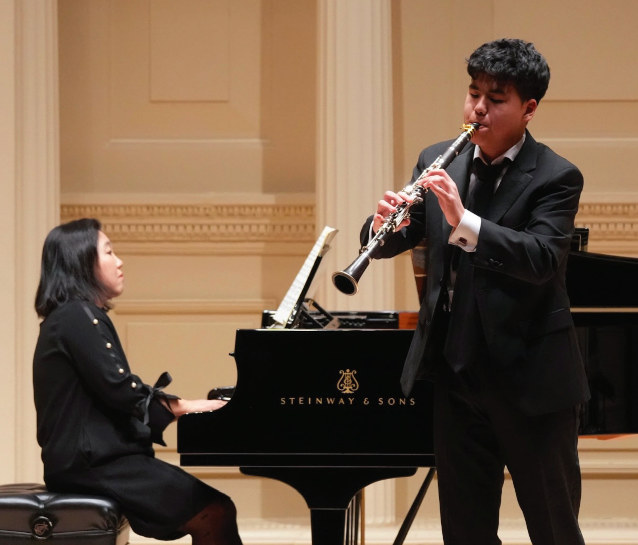 Four years ago, it was challenging for young Davin Lee to adapt to his new environment on the North Shore when his family moved here from New Jersey. In 4th grade at the time, he felt like he wouldn’t be able to improve on and progress his musical skills. But he learned otherwise.

“I was encouraged one time listening to professional musicians and that helped me realize that maybe the clarinet would be an interesting idea to work on in the future,” Lee says. “I started practicing two hours a day and it felt familiar and natural to play the clarinet and as I began to practice more often my teacher began to notice some improvements.”

At that point his teacher committed to working with Lee full time and having him learn more repertoire, and Lee started to enroll in competitions. In 2021 he enrolled in the American Protégé International Competition, where the winners would be rewarded the opportunity to play at Carnegie Hall in New York. The competition stipulated he had to both play live and send a video.

“This is the first competition I’ve ever played in, and I was really determined to get this one. I practiced for hours every day and being encouraged by my teacher really helped,” says Lee. “I also had to record, and this was especially difficult because recording meant that I wanted to have the best recording session meaning it would take long hours to get the perfect video.”

After recording for hours, Lee completed a video he was comfortable with and a few months later he was emailed the letter that he would play at Carnegie Hall with the first-place award.

Lee lives in Lincolnshire and attends Lake Forest Academy, where he says the music program has been extremely supportive. They invited him on stage to do a practice run before his Carnegie Hall performance and also spread the news that he would be playing. He says he had a lot of support and encouragement throughout the competition.

In addition to Lake Forest Academy Orchestra, Lee also plays in the Chicago Youth Symphony Orchestra. He says playing in an orchestra has been an “amazing experience.”

“Playing in these large orchestras is so much fun because it gives you a grand sense of the music,” he says. “Being part of a large group just makes the music more impressive and fun to play.”

At first Lee was nervous to play Carnegie Hall because he kept imagining what it would be like if he botched his performance and made mistakes during the program.

“Right before I got on stage my hands were getting really sweaty but my accompanist, my pianist, told me this was going to be a once in a lifetime moment and to really enjoy the music and play it beautifully,” he says. “Hearing that, it soothed me a lot, and walking on the stage I had a new goal and that was to have fun and enjoy the music that I would be playing.”

It’s a little early for Lee to think about what he wants to do in the future. He is just a Freshman in high school, after all.

“Lately I’ve been thinking that going pro in the clarinet would be a dream come true, but it’s such a difficult life, especially for a professional clarinetist,” Lee says. “Finding a spot in an orchestra is such a difficult task and it requires some luck.” No matter how Lee’s future turns out, he’ll always have Carnegie Hall.