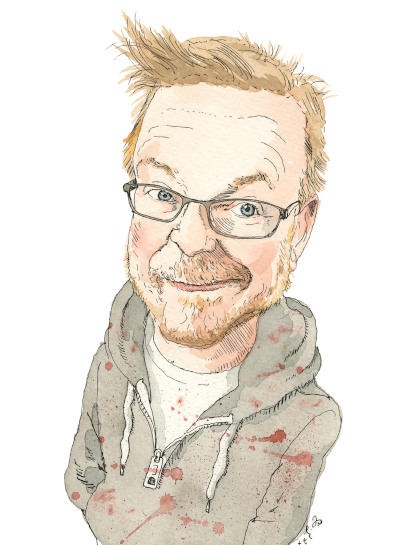 I can hear a giggling Jarvi, humble and stunned, now: My name, next to those names?

Because it’s warranted. The 42-year-old Jarvi, who grew up in Lake Bluff and donned a Lake Forest High School cap and gown in 1999, loves to be frightened out of his wits and socks and truly adores gore in horror flicks.

“Someone asked Stephen King, ‘What happened to you?’” Jarvi says, adding the inquisitor had sought to shed a whit of light on the origins of the prolific horror novelist’s seemingly dark side. “The interviewer then asked, ‘Something awful must have happened to you at a young age.’ Stephen responded, ‘Nothing happened. I’m just this way.’

“That’s my answer, too. I’ve been super interested in horror since leaving my childhood house after high school. Horror is fun. I love all types of the genre, from high-class horror to cheesy horror.”

The late film director Wes Craven—dubbed “Guru of Gore” and “Master of Horror” and the frightening force behind the movies Nightmare on Elm Street and Scream—viewed episodes of Jarvi’s award-winning, 10-episode web series, The Platoon of Power Squadron (2009-2017). Jarvi served as the project’s creator, writer, editor, and sound editor, as well as a co-producer and “SFX guy.”

Craven, on Jarvi’s work: “Slick in the best sense of the word. Very well-conceived. Very powerful and unsettling.”

Too bad Craven, who died in 2015, won’t eyeball Jarvi’s latest work, Haunt Season, a feature-length horror film shot mostly at the Realm of Terror Haunted House in Round Lake Beach last summer and fall. It’s about a costumed killer who picks off members of a Halloween haunt attraction, bringing their gory fake injuries to life.

It’ll be a must-see for horror fans and a must-cover-your-eyes for other popcorn-tub moviegoers.

“I did it. I finally made a real movie, a real horror movie, which is something I’d always, always wanted to make,” says an elated and relieved Jarvi, who somehow managed to make it while retaining his full-time job as head of video production and video editing of guitarist Rob Scallon’s YouTube channel. “The business of horror is much harder than I thought it would be. Making a movie with professionals, compared to making a web series with good friends … big difference.

“The lighting, for example,” he continues. “The time it takes to get the lighting exactly right on set, especially for a gory scene, is truly insane. It has to be stylish, so that the movie will look like an actual movie. It took a half-day to shoot a decapitation scene and another half-day to shoot an arm being chopped off.”

But Jake Jarvi, the creative and scary-good and ghoulish filmmaker, morphs into Jake Jarvi, the proud husband and tenderhearted father, off set. He met his future wife, Eliza—head of youth services at Lake Bluff Public Library—at Center Video (R.I.P.) in Lake Bluff, or “Lake Bluff’s emotional epicenter for me,” Jake claims.

“Eliza is not a horror girl, but she was the true champion of this thing,” Jarvi adds. “She took care of the Haunt Season payroll and the catering (for 30 cast and crew members, plus extras), and she made and painted props. She liked figuring everything out.”

The couple’s daughter, Elinor, is 4. Nothing melts Jake like the precious time he gets to spend with Elinor at home in Gurnee.

“She’s a doll, a total sweetheart,” he says. “I love hanging out with her, watching TV next to her on the couch, with her head resting on my arm.”

How touching. How sweet. And you thought a longtime horror buff adept at featuring dismemberments for the big screen couldn’t possibly be disarming.

Jarvi started writing the Haunt Season script in March 2020, when the number of people wondering about COVID-19 exhausted the world’s search engines. He later presented his undertaking on the crowdfunding service Wefunder, a “Kickstarter for investing,” with the initial goal of raising $80,000 to back the movie.

“We blew past that goal and then set a maximum goal ($106,999), which we reached (last July),” Jarvi says. “I couldn’t believe how many investors (151) we had attracted. It was like all the kids who grew up watching The Platoon of Power Squadron got jobs and invested in my movie.”

Jarvi’s team shot the flick at Realm of Terror in only 23 days last year, between the beginning of August and the end of October. Jarvi tapped Realm of Terror’s Steve Kristof, a hauntrepreneur since the age of 13, to co-produce it and named Alexander Lakin head of photography.

“All the people who work at Realm of Terror are sweethearts who love gross, creepy, dark stuff,” says Jarvi, who established his company, First Fright, LLC, last April. “We were thrilled, having free access to the haunted house.”

Haunt Season is in post-production. The next two steps: submit the final cut to festivals (South by Southwest and the Toronto International Film Festival, to name a couple) and wow a distributor.

“Ideally, my movie runs in theaters this Halloween,” Jarvi says. “If I have to wait until Halloween 2024, that would be fine. My biggest concern is that the movie makes money for its investors; I want them to be rewarded for supporting me.”

“I learned that I can handle a lot, that I can perform well under intense pressure,” he says. “I kept the wheels on the road.”

Jarvi cut his teeth—make that, cut his fangs—in the horror-film industry during the making of Disgruntled in 2008, when he collaborated with its director, JWC Media Publisher John Conatser. Jarvi co-wrote and edited the 61-minute slasher film.

It was shot in Highland Park, in just 13 days.

That’s not even a nanosecond in filmdom.

“It was a lot of fun, I had a blast, but it was really, really, stressful, mostly because of the time constraint,” Jarvi recalls.

Jarvi worked at North Shore-based JWC Media for 10 years as a magazine/newspaper feature writer and video editor for the company’s outlets. Before that he appeared as an extra in the movies Old School (2003) and Master and Commander (also 2003) and as Travis in an episode of the TV series Dr. Vegas (2005), among other actor credits.

Next up for Mr. Jarvi?

Nothing definitive, yet. Maybe something entirely different.

Visit wefunder.com/first.fright.llc for more information about Haunt Season and the horror film’s team.