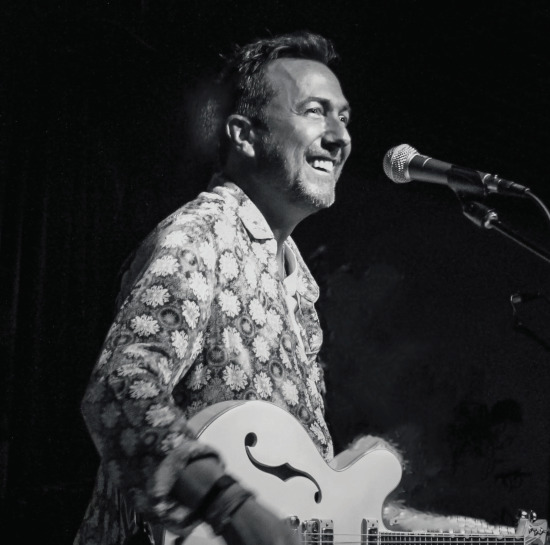 He is a man of a million stories. You tend to collect a lot of them when you’re Derrick “Suede” Stout and you’ve been in the music business for nearly 40 years— whether it’s a story about Richard Marx or the Beach Boys or Eddie Vedder.

Stout grew up on the North Shore and says many of his high school friends looked forward to moving away for school or to start their adult lives elsewhere. His heart has always been anchored here.

“I grew up in Lake Forest but, as I like to say, I’m surprisingly well adjusted. When I was growing up it was the ‘70s and it was more like a Mayberry, a nice little town,” Stout says. “It was about strangers on the street saying ‘hello’ to each other, all very kind and safe.”

Stout says his music career turned out to be something of a fluke. When he was young, he got interested in theater and performed in a number of local productions.

“It all was sort of an accident. I did children’s theater. In the old days in Lake Forest, it was called ‘Group For …’ and they had a children’s department that did theater,” he says. “Vince Vaughn was in it, and I did nine shows with him. It was a great place if you wanted to try that out.”

During his junior year at Lake Forest High School, Stout performed in a show titled, “When Are You Coming Back Red Ryder,” and got such good reviews that colleges like DePaul and Loyola started offering scholarships for their theater programs. With the help of his supportive parents, he figured he was well on his way to an acting career.

Stout says he “tripped on a piano” and discovered he was a natural at not just playing the piano but other instruments such as the drums and the saxophone and harmonica.

“Any instrument that I picked up I could perform at a pretty high level. I thought this was cooler than acting because you’re an actual person,” Stout says. “Then I started writing music, from classical minuets to pop songs to blues to jazz.”

Stout began composing in many different styles, and as a result wanted to perform in different styles. Much of his early writing was instrumental, new age-style music in the vein of the solo pianist George Winston. Early on in his performing career, a close friend told him the Deerpath Inn in Lake Forest was searching for a pianist.

“I always think of Sam in Casablanca. They wanted someone there playing Gershwin and Cole Porter,” Stout says. “I Went to the audition and started the next week. Because they wanted it really to be in the background, I was able to play predominantly my own music and write music while I was there. Even if I flubbed a note nobody heard it.”

Stout met and befriended other local musicians while playing at the Deerpath Inn, which led to other gigs and eventually the start of a successful career that included traveling the world with prominent musicians like Brian Wilson of the Beach Boys. One of his fondest memories is of a residency he did at the old Lovell’s in Lake Forest. He also started a record label, Darwin Records, named after his father.

His first album, titled Deerpath, is a collection of solo piano numbers named after places in Lake Forest. It ended up being pressed five times. He built a recording studio with the proceeds from his recordings and live performances.

“Most musicians I know practically pay to play,” he says. “But I just kept banking this money and I decided I’m going to sign every one of my friends that I think is really good and put out a record for them and I’m going to produce it in my recording studio.”

In addition to his music production and solo performance work, Stout plays in a number of collaborative acts with an impressive group of musicians who have played with artists such as Paul McCartney, Sheryl Crow, Neil Young, and Eric Clapton.

The projects reflect his early and varied interests in musical genres. There’s a big band orchestra, a Beatles tribute band, and the Suede Diamond Band, which highlights Stout’s vocal range and style that is similar to Neil Diamond.

“Unlike other musician for hire, we are the real deal, Grammy-considered, Grammy-nominated, and Grammy winners,” he says. “We play with passion, talent, sincerity, and commitment, and it shows.”

Darwin Records will be releasing anniversary versions of Suede’s entire catalog in spring 2023, all with bonus tracks, re-mixed and remastered on flash drives. The drives will also have over 50 previously unreleased tracks. For bookings, contact [email protected] or 847-997-8870. You can also visit suedemusic.weebly.com.