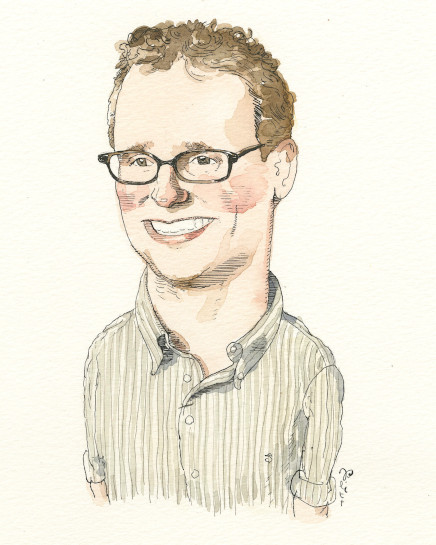 Josh Wolff and his big brother, Ben, found themselves transfixed by Saturday Night Live sketches as youngsters growing up in the Washington, D.C. area.

Especially any that starred either Dana Carvey or the late Phil Hartman.

Ben even dressed up as Carvey’s “Church Lady” character one Halloween, pursing his lips and scrunching his face after shrieking “Trick or Treat!” at dozens of homeowners.

“My brother inspired me and supported me,” says the 41-year-old Josh Wolff, named director of film programs at Lake Forest-based Gorton Center in early August. “I’d tried the theatre scene for a couple of years in D.C. but couldn’t find traction. I moved to Chicago and got accepted as an artistic apprentice (on his second try) at Steppenwolf. Acting at storefront theaters followed.”

Yet stability on stages remained elusive.

“I loved acting, but I was horrible at the business side of it,” says Wolff, an Evanston resident since 2018.

“Ben and I,” Josh says, “were having a conversation years ago when he planted the seed that led me to a career shift.”

Ben was PBS-serious, not SNL-funny. Ben did not utter, “Well, isn’t that special?” at any point in the exchange.

Ben simply asked Josh, “Have you ever thought about filmmaking?”

The little brother—having earned a hybrid degree in theatre/English at Bowdoin College in Maine, after performing in such plays as All My Sons and Henry V at St. Andrew’s Episcopal School in Potomac, Maryland—later got his hands on a sizzling product in 2008, a digital camera, and couldn’t let go of it.

“The digital revolution was going on at the time,” Wolff says. “Anyone with a decent camera could make films; new filmmakers were emerging everywhere. It gave me opportunities to do what I couldn’t do as an actor.

“It allowed me to tell stories.”

Wolff enrolled at DePaul University’s nascent School of Cinematic Arts in 2010 and made a film, a short piece titled Guidance, as part of the Masters of Fine Arts program. He shot the film—about a Catholic high school guidance psychologist who struggles to keep his personal and professional lives separate and intact—along the North Shore and in Chicago.

The 18-minute movie won awards in 2016 at the Midwest Independent Film Festival and at the Rome (Georgia) International Film Festival.

“DePaul was forward-thinking when it started one of the first, if not the first, all-digital film programs in the country,” says Wolff, who, since 2015, has served DePaul as an adjunct professor, teaching mostly screenwriting courses. “It’s fun for me to be a part of DePaul’s film community; it’s the highest ranked film school in the Midwest, and I love teaching and engaging with students.

“I plan to continue filmmaking, with my big goal to make a full-length, independent feature film.”

But he’s also just as enthusiastic to embrace and tackle the Gorton gig. Some things won’t change, like the showing of Home Alone at Gorton’s cozy, state-of-the-art John & Nancy Hughes Theater—the Cinematic Wonder of Lake County—on the day after Thanksgiving. The bulk of the patrons in the filled venue attended the Lake Forest Tree Lighting Ceremony at Market Square after the screening on November 25.

Many scenes in Home Alone, written and produced by John Hughes, were filmed in Winnetka, where Wolff ’s parents—Glencoe native Richard Wolff and Chicagoan Joan—plan to move.

January will be packed with enticing Gorton offerings for film buffs. The center’s first “First Thursday Series” in 2023, on January 5, features the powerful documentary Bad Axe, produced by Academy Award-nominated and Lake Forest resident Diane Moy Quon. It’s a real-time portrait of an Asian-American family fighting to keep its restaurant and American Dream alive in the face of the pandemic.

Blood Simple, the first feature film by the Coen brothers (Joel and Ethan), is a stylish crime thriller from 1984 starring Frances McDormand, M. Emmet Walsh, and Dan Hedaya. Its Gorton Center showing is set for January 13.

Exactly two weeks later, another Quon-produced work, Surf Nation, kicks off Winterfest Weekend at Gorton. The feature-length, observational documentary tells the story of hundreds of athletes—some as young as 9—training as Olympic hopefuls in surfing in the Chinese province Hainan. Co-directors Jeremiah M. Bogart Jr. and Jessica Q. Chen will field questions from the attendees afterward.

A day later, on January 28, something new: the presence of food trucks and fire pits (for s’mores, more or less) to augment the highly anticipated Mountainfilm on Tour. Mountainfilm travels worldwide year-round with a selection of current and best-loved films from the annual festival in Telluride, Colorado. This year’s program includes a series of All Ages Best of Fest short films at 2 p.m.; the ecologically focused and exhilarating Adventure Shorts at 4 p.m.; and the eclectic Mountainfilm Medley at 7 p.m.

Mountainfilm on Tour: Lake Forest is co-presented with Lake Forest Open Lands Association and sponsored by the Butler Family Foundation and The Community Church of Lake Forest and Lake Bluff.

Wolff estimates Gorton will screen between 30-35 films from January 5 to April 30.

“I hope to serve the community as a good steward in my role as Gorton’s director of film programs,” says Wolff, who ranks Forest Gump and Moonlight among his list of favorite movies.

“I want the movies we show to entertain, engage, enlighten, and spark debate. Storytelling through film is a serious matter, and it’s a fundamental part of the human experience. I consider it a huge responsibility, selecting the movies we plan to spotlight at Gorton.

“I love what (the late film critic) Roger Ebert said about the influence of movies. He said they’re powerful vehicles that generate empathy.

“That gets me jazzed up.”