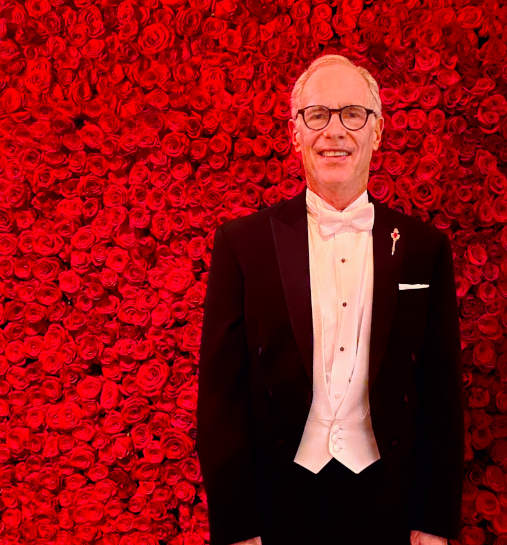 Fred Karger at the entrance to the 2022 Met Gala.

One of the most exciting nights of Fred Karger’s life began—as few in the history of time ever have (or will)—with a fake Oscar statuette. The ersatz Academy Award had watched Fred from its perch on the bookshelf above his desk for over a decade. He’d purchased it, on a whim, from a shop in West L.A., where an enterprising salesman told him it was forged in the same Rockford factory responsible for making the real trophies. Fred being Fred, he figured it might come in handy someday.

“Someday” turned out to be the night of the 2006 Academy Awards—or, more specifically, the night of the 2006 Vanity Fair Oscar party. By then, Fred had managed to crash the Academy Awards ceremony itself not once, not twice, but three times. But he’d never tried his hand at the Vanity Fair party. Held annually at Morton’s, and hosted by the magazine’s editor Graydon Carter, the shindig had become the post-show celebration. It was also infamously difficult to get into, with stringent security and a meticulously put-together guest list.

So how, exactly, did Fred manage to get inside that fateful evening in 2006?

Suffice to say, it involved a little bit of luck, a lot of charm, and a timely impersonation of an Oscar-winning visual effects supervisor—plus, that fake statuette.

His exploits paid off. By the end of the night, Fred had rubbed elbows with everyone from Hollywood legend Lauren Bacall to Jon Stewart to Jake Gyllenhall. (He also almost dropped his fake Oscar onto Catherine Keener’s foot. But that’s another story… ) 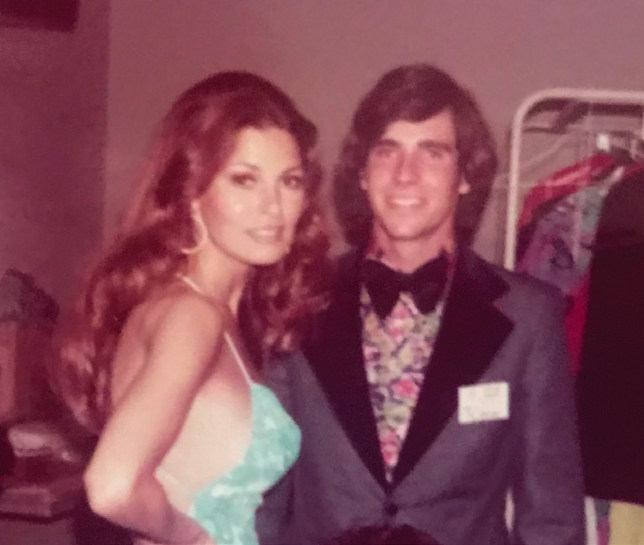 Fred backstage at the 1972 Oscars with Raquel Welch.

Experiences like this—and many, many more—have given Fred, a North Shore native, the undisputed title of “world’s greatest party crasher.”

Now in his 70s, he’s decided it’s high time to share his adventures in a wry, rollicking, and surprisingly moving memoir, aptly titled World’s Greatest Crasher. It will be available to purchase in 2023. (Full disclosure: I worked with Fred on the book.)

Fred’s story begins in Glencoe, where his family epitomized a sort of postwar American bliss—as if the show Leave It to Beaver came to life in the greater Chicago area. His father ran a stock brokerage firm. His older brother, Dick, was the quarterback of the New Trier football team. His mother was a stay-at-home mom, with weekly canasta games and a commitment to charity work. For Fred, there was touch football and bike rides along the lake, trips to the soda fountain and local record shop. Every night, the four Kargers would have dinner together.

As he got older, though, Fred sometimes felt like he was simply playing the part of a normal kid, in a normal family, in a normal town. By the sixth grade, he’d realized he was gay—if not in those exact terms, then in the more instinctual way children of a certain age can come to know these things. A closeted teen, Fred grew accustomed to pretending to be someone else. This circumstantial knack for deception lent itself well to his early crashes, long summer nights when he would drive down to the city with a few friends to sneak into glitzy events at the Palmer House or Conrad Hilton. Ironically, Fred rarely felt more like himself than when he was crashing. 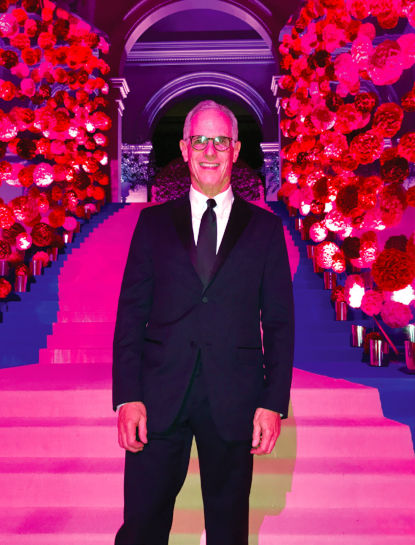 Fred in front of the famous stairs at the 2017 Met Gala.

In 1972, when he was a student at the University of Denver, he and his friend posed as the nephews of RCA president Robert Sarnoff in order to get tickets to the Academy Awards (which ran on NBC, then-owned by RCA). All he had to do was type up a note on an NBC executive’s official letterhead—which he’d fortuitously swiped after a taping of The Tonight Show the previous summer—instructing the press office to give “Mr. Sarnoff’s nephews” badges for the ceremony. 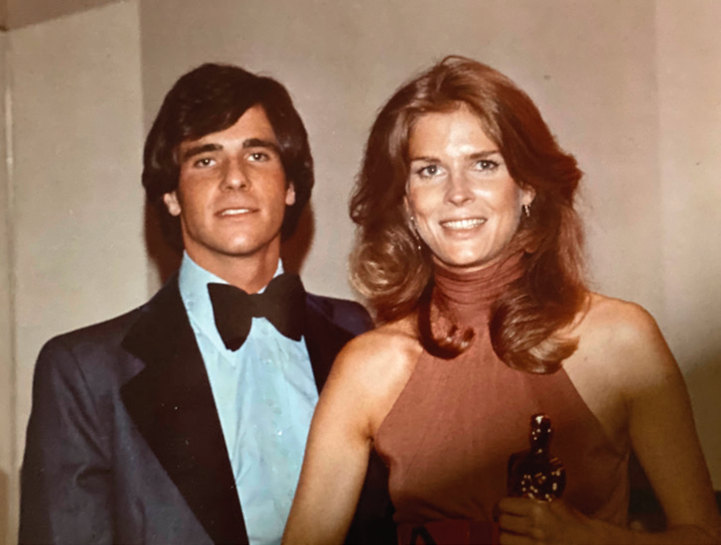 Fred with Candice Bergen at the 1973 Oscars.

Not content to watch the show from his seat, Fred leveraged his all-access pass to get to the press room, where award-winners took questions from assembled journalists. At the end of the ceremony, he followed the celebrities gathered nearby to a set of risers on stage. From there, he would witness one of the greatest moments in Oscar history—Charlie Chaplin returning from self-imposed exile to receive the honorary Academy Award.

In a twist of North Shore-related fate, Fred paired off with none other than New Trier alumnus (and Academy Award-nominated actress) Ann-Margret in the line forming to shake the silent film star’s hand.

After college, Fred ended up moving to Los Angeles to pursue a career in acting, under the tutelage of another North Shore native, Allan Carr (who is most famous for co-producing Grease). Meanwhile, he continued his misadventures in party-crashing. Over the next few years, Fred charmed his way into Frank Sinatra’s private penthouse party and Elvis Presley’s Las Vegas dressing room—not to mention, the 1973 and 1974 Oscars. 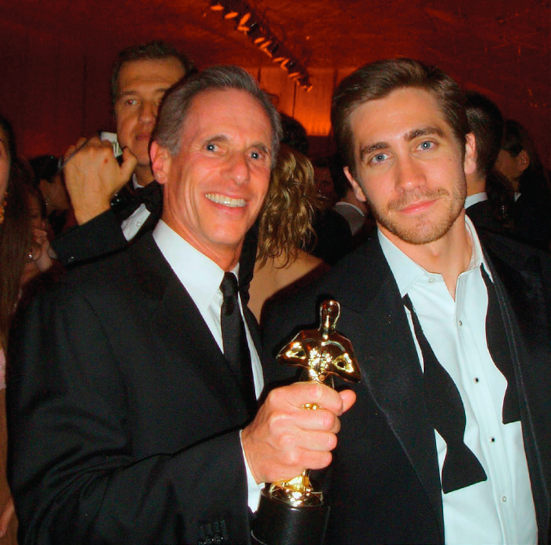 Fred with Jake Gyllenhaal at the 2006 Vanity Fair Oscar party.

Although Fred found some success as an actor, winning a recurring role in a never-produced spin-off of the popular sitcom, Welcome Back, Kotter, his real calling turned out to be politics. Throughout the ‘80s and ‘90s, Fred worked for the Dolphin Group, a top consulting firm that pioneered a number of strategic techniques political operatives deploy to this day. He proved particularly skilled at opposition research—unearthing the sort of details his adversaries would’ve preferred to keep secret.

All this time, of course, Fred was keeping a big secret of his own. In fact, it wasn’t until he retired in the early aughts that he finally came out publicly. But he came out swinging, so to speak, using his experience in politics to become a formidable activist for LGBTQ rights. His impactful work rallying against Prop 8 in California, and exposing the Mormon Church’s anti-gay crusades, garnered him coverage everywhere from The New York Times to Mother Jones.

Then, in 2010, Fred decided to do something quintessentially, for lack of a better word, Fred: He decided to run as an openly gay, Jewish Republican in the 2012 presidential election.

Crazy? Yes, definitely. But for Fred it also represented the ultimate crash—a strangely fitting culmination of his storied political career, newfound activism, and preternatural ability to infiltrate the most exclusive spaces.

Although Fred came short of his goal—to appear in a televised presidential debate—he still managed to get his name on the ballot in six states, as well as to connect with nearly 100 LGBTQ student groups across the country (including one at New Trier).

While Fred’s political ambitions have waned in the intervening years, his appetite for crashing has only increased. In the past decade alone, Fred—who now has the added benefit of being a rather distinguished-looking older gentleman, especially in a well-fitting suit and tie—has crashed several White House Correspondents’ Dinners, two Met Galas, and countless other high-profile events. 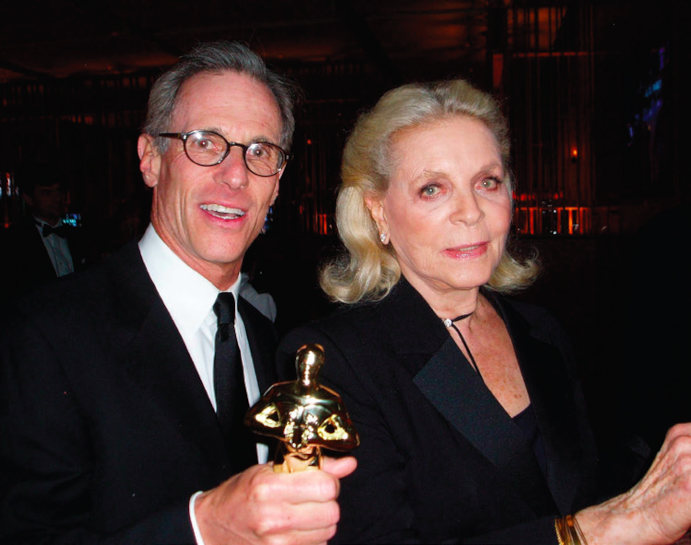 Fred with Lauren Bacall at the 2006 Vanity Fair Oscar party.

Along the way, he temporarily became a member of Kim Kardashian’s entourage, narrowly avoided the suspicions of Vogue editor Anna Wintour, and used the long, shimmering train of Blake Lively’s ball gown as a Trojan Horse to get into one of the Met Gala’s hottest afterparties.

Despite his many accomplishments, Fred isn’t content to rest on his laurels. He may’ve checked off every item on his bucket list (some of them twice). But for him, there’s always another party, another celebration, another challenge—the thrill of the chase and the satisfaction of a crash well done.

Needless to say, he should have plenty of material for a sequel.

You can read the first chapter of World’s Greatest Crasher and learn more about Fred at fredkarger.com/worlds-greatest-crasher/.