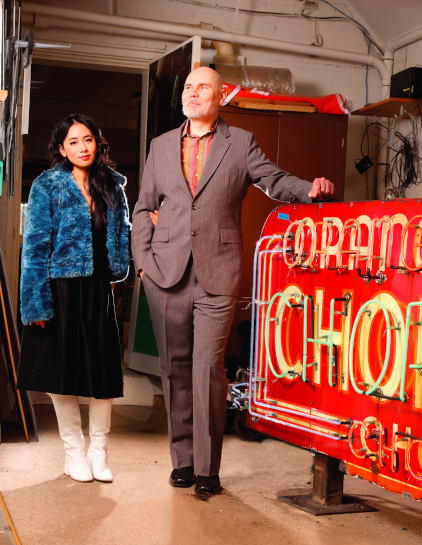 Most people light up a tree over the holidays. Billy Corgan and his partner, Chloè Mendel, are lighting up a sign. Last May, Mendel acquired the famous Chop Suey neon sign that hung for decades outside the Orange Garden restaurant on Irving Park Road in Chicago. Corgan, the Smashing Pumpkins front man, had always admired the sign so Mendel gifted it to him as a birthday present.

After having the sign restored, a process that involved replacing neon bulbs and electrical wiring, Highland Park residents Corgan and Mendel will celebrate the sign’s installation at their Highland Park tea house, Madame ZuZu’s, on December 17. And they’re throwing a party to mark the occasion.

It’s required a little work to get Chop Suey back to its original condition, but the couple is happy with the results.

“There are places that restore neon signs because people still make neon signs for their stores. We worked with a local company in Highwood—it was important to work with a local small business, but the sign hasn’t been lit in a long time,” Mendel says. “It’s been broken, so we had to replace all of the neon and restore the original color. It looks amazing now.”

The restoration was only the half of it. While that took just a few weeks, the process of installing the sign in the tea shop and making sure they have the right electrical in place added to the challenge. Plus, the thing is a beast.

“I believe it’s about 12 or 13 feet long so moving the sign was actually the hardest part,” she says. “We had to get lifts and cranes to move it, and we have to move it twice. It’s coming back now because we moved it off site to be fully restored.”

“The internals are iron and the face of it is porcelain, so it’s a lot heavier than you think it would be,” Corgan adds.

Chop Suey will sit just to the right of ZuZu’s performance stage on some newly built cabinetry and will be always lit. The point is to create a unique experience for Madame ZuZu’s customers.

“I think the idea was and is always to create an ambiance and an atmosphere which is sort of lost. It’s obviously an idealized version of what it would have felt like, say back in the 1930s,” Corgan says. “I’m a person who will scroll through endless pages on the internet looking at old designs, whether it’s department stores or diners, stuff like that. It always strikes me, particularly in the deco age, that there was a heightened sense that aesthetics was very important to the customer experience.”

Corgan says he often laments that in the modern world aesthetics have gone by the wayside and that we’ve fallen into a general vibe of what a coffee/tea house is supposed to look and feel like.

“It’s very important for us that when you come into ZuZu’s it’s a completely different atmosphere than anywhere else and that atmosphere hopefully will heighten your experience of the food and drink and the gypsy music playing,” he says. “We’ve got a lot of customer feedback to that regard, so the sign was part of thinking, ‘Well, this would be a nice thing to add’, especially because I’d always fawned over this thing.”

Corgan and Mendel were pleasantly surprised by how widespread the admiration for the sign is in Chicago. They heard from friends near and far who shared their appreciation for Chop Suey before it was removed from the restaurant.

“We’ve received so many selfies of people with the sign since they found out we bought it,” Mendel says. “Even people we know from other cities have made pilgrimages to the sign. I didn’t know how important it was when I bought it because I’m not from here.”

To celebrate Chop Suey’s restoration and installation, the ZuZu’s owners are hosting a lighting ceremony at the tearoom on December 17. They’ve partnered with Chicago brewer Hop Butcher For The World, who’s creating a special beer made with ZuZu’s Tropical Spice Clementine Tea, called Winter Garden.

It’s the second collaboration between the two businesses, the first being a beer produced last year to mark the 30th Anniversary of the release of the Smashing Pumpkins’ album, Gish.

“They’re incredible, they’re awesome people, and their beer is great. They’re very Chicago, and they have an affinity for the sign, too,” Mendel says. “When I bought it, they wrote to me immediately and wanted to know who’s restoring it and everything about it.”

Jeremiah Zimmer, owner and co-founder of Hop Butcher For The World, says the partnership with Mendel and Corgan has been somewhat serendipitous. Zimmer has been a Smashing Pumpkins fan for decades, and it all started when Hop Butcher sent a box of beer on a whim to ZuZu’s with a note declaring Hop Butcher staff ’s admiration for the band. A few sips of beer and a few phone calls later, a collaboration was born.

“They have so much stuff going on and they’re ultra-creative, so even though our creative output is different, I think there’s some commonalities there that make us appreciate each other a little bit more than just nice people working together,” Zimmer says. “They’ve been wonderful. The fact that we’re going to be able to use their tea in our beer and that beer is going to be named for this party is huge.”

Hop Butcher was and is in a perfect position to partner with ZuZu’s given its unconventional approach to brewing. The brewery releases new beers on a weekly basis.

“Our schtick as a brewery is we don’t really operate like most other breweries where they have flagship beers that are available all the time or even seasonals that they rotate throughout the year,” Zimmer says. “We release two beers a week, sometimes three or four, but usually two different beers a week.”

Zimmer says the buzz created by their new releases, especially among serious beer drinkers, becomes a sort of chase every week, so if someone is a Hop Butcher fan, they’re going to know when and where to find the new beers.

“It allows us to keep things fresh and to scratch the creative itch of using all the different ingredients that we want to use,” he says. “It gives anyone who drinks our beers the opportunity to learn something about hops and what we expect the flavors or aromas to be.”

For Corgan, one of the highlights of now owning the Chop Suey sign has been getting to know the family that launched the original Orange Garden restaurant. The effort to restore the sign has led to personal connections.

“We’ve been in contact with the family that originally owned the restaurant, and many of the family members have come in to see the sign and share stories with us about the restaurant and working in the restaurant,” Corgan says. “It’s been really cool to get to know the family. It’s just nice to see because it means so much to them that somebody cares about their family’s legacy.”

The lighting party for the Chop Suey sign will take place at Madame ZuZu’s, 1876 1st Street, in Highland Park, at 6:30 p.m. on December 17. Tickets are $25 and can be purchased at madamezuzus.com. Entry to the lighting ceremony, a can of ZuZu’s Winter Garden Ale, and festive bites are included with each ticket purchased.