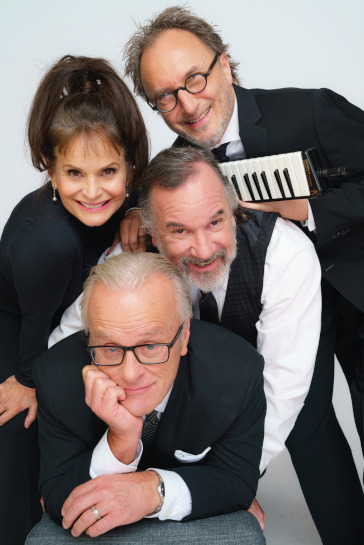 The Practical Theater Company—an improvisational sketch comedy troupe that launched the careers of Julia Louis Dreyfus and Saturday Night Live veterans Brad Hall, Paul Barrosse, and Gary Kroeger—is back in the Chicago area to present a hilarious sketch comedy show at Studio5 in Evanston from December 29 to 31 and January 4 to 7.

The Practical Theatre Company was originally founded in 1979 by Barrosse, Hall, and a group of fellow Northwestern University students with a goal of performing improvisational comedy and new plays. After leaving Northwestern, the company produced a string of successful comedy shows in Chicago throughout the 1980s, and several of its members catapulted to fame when they were hired by Saturday Night Live for the 1982 season.

After a two-decade hiatus, The Practical Theatre Company reunited in 2010 when Barrosse, Victoria Zielinski, and musician Steve Rashid began doing shows together in Los Angeles and Chicago. The trio later joined with fellow Northwestern alum, Dana Olsen, to perform a series of holiday comedy shows at Studio5. Olsen is a screenwriter best known for writing The ’Burbs, and George of the Jungle.

“We were ready to do this show last holiday season at Studio5,” said Barrosse. “But when Omicron hit, things weren’t so post-pandemic anymore and we had to cancel the show. We can’t wait to get back in front of an audience and share some laughs after all the madness everyone’s been through.”

A mix of comedy sketches and original songs, this year’s revue will tackle everything from marriage to cancel culture, conspiracy theories, Greek gods, William Shakespeare, whoopie cushions and more.

The music will be performed by Rashid, co-artistic director of Studio5, along with Ronny Crawford on drums, Jim Cox on bass and Don Stiernberg on guitar.

Alcoholic beverages are available for purchase at all shows.