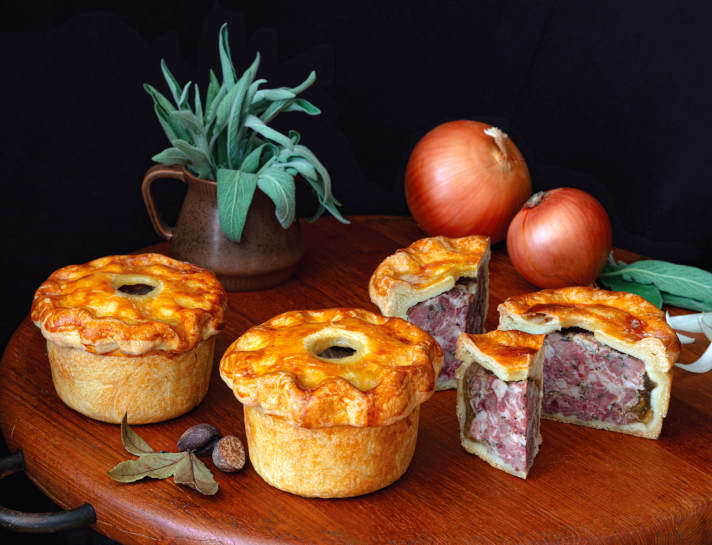 Americans love their apple pie, but in Britain, pork pies rule the pastry roost. Brits spend more than £165 million on pork pies every year, according to statistics from the Kantar Worldpanel—more than they shell out for any other pie variety there. And among pork pies, the Melton Mowbray variety is king.

Melton Mowbray, a town in rural Leicestershire, England, calls itself Britain’s “Rural Capital of Food” for the pork pies and Stilton cheese, both having been granted protected designation of origin (PDO) status by the European Commission. That distinction means anyone outside the 10-mile radius surrounding the town, and anyone using cured meat in the recipe, can’t officially call their pork pie a Melton Mowbray.

With that in mind, our Melton Mowbray-style pie uses hand-minced, uncured pork like the original, mixed with salt, pepper, sage, and a squirt of anchovy paste. Tucked into a traditional hot water crust with rich stock poured in through the vent hole to seal the meat, it’s a filling, portable feast. That portability made the pie a favorite bring-along on foxhunts as far back as the late 1700s. But the flavor of the pie took it nationwide.

To make it here, I adapted the recipe from Linda Collister’s wonderful, The Great British Book of Baking, with American measurements in mind (i.e., a “rasher” of bacon is what we know as a “slice.”) My boys, who love anything that looks like it came out of The Wind in The Willows picnic hamper, give the result a big thumbs up. While traditionally eaten cold or room temperature, we like the pie warmed a bit with a pile of cornichons and strong mustard on the side. Note: You will want to make the jellied stock the day before you bake the pies.

FOR THE JELLIED STOCK

• 8 cups water (or enough to cover the bones and veg)

• 3 large eggs (you will use the whites for clarifying the stock; save and refrigerate the yolks for the pastry wash)

FOR THE HOT-WATER PASTRY CRUST

• Place all ingredients in a heavy-bottomed stock pot over medium heat. Heat to boiling; reduce heat to a simmer. Skim off and discard foam. Partially cover pot and simmer for five hours. Remove from heat and strain stock through a colander into a fresh pot, discarding solids from the colander. Cool stock. Skim off and discard any fat that has collected on the surface. To clarify, separate three eggs, saving the yolks to brush on the pastry crust. (Cover and refrigerate yolks.)

• Whip egg whites until soft peaks form. Stir egg whites into the pot of cooled stock. Heat over medium heat until stock begins to boil. The whites will float to the top of the stock, pulling soup impurities with them; stop stirring and boil the stock until has reduced to about 3 cups of liquid. Remove and discard the eggwhite raft. Pour stock through fine mesh strainer. Season finished stock with salt. Refrigerate.

• In a large cooking pot over medium-low heat, add butter, solid rendered bacon fat, milk and water. Heat gently until the fat has melted, without allowing the mixture to boil. Place sifted flour mixed with salt in a large bowl and create a well in the middle. Using a wooden spoon, stir the warm liquid into the flour until the mass comes together into a soft dough ball, knead slightly. Cut dough in half and roll half of the dough out to about 1/8 to 1/4-inch thickness.

• Coat the insides of six, 8-ounce straightsided baking crocks with vegetable shortening. Cut parchment paper strips and circles and press into the sides and bottoms of the crocks. Cut 3 circles of the dough about two inches larger than the crocks; ease and fit dough into the first three crocks, pressing firmly to mould the dough to the sides of each crock, leaving no air pockets. Leave about 1/2 inch of dough sticking up above the edges of the crocks. Repeat with the second half of the dough and remaining three crocks.

• Cut six, 6 x 2-inch strips of aluminum foil. Wrap strips around your forefinger to create little metal tubes. Poke each tube into the hole in the top of each pastry to create a vent. Place filled crocks on a baking sheet. Beat egg yolks and coat the top of each pie with egg yolk. Bake at 400 for 15 minutes. Reduce heat to 350 and continue baking for 45 to 50 minutes until liquid is bubbling through the vents and crusts are a deep golden brown. Remove from oven. Cool.

• When pies are cooled, the meat filling will have pulled away from the inside of the crusts. To fill this gap, slightly warm 1 cup of the reserved jellied stock, just until it is pourable. Pour a small amount of stock into each pie through the metal vent. Remove and discard vents. Refrigerate pies for several hours to solidify the jellied stock. Serve pies cold, or at room temperature. Or, place a pie on a plate and warm slightly (the jellied stock will spill out when you cut warmed pies.)