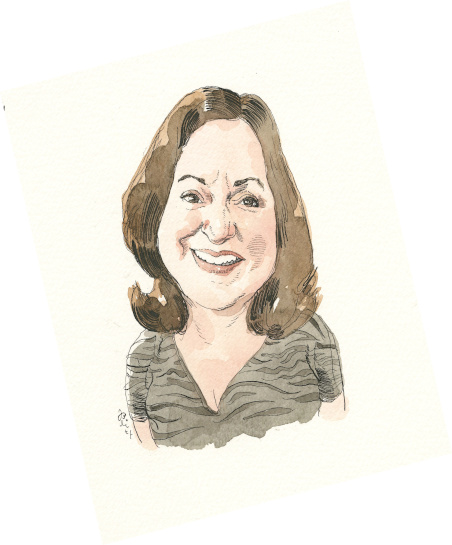 It could be said that musical talent helped the late Masha Pietkowski survive the Holocaust. She played the mandolin in an all-female orchestra at the Auschwitz concentration camp for nearly 18 months, beginning in 1943.

The facts are sobering. Audience members included SS personnel. And among each musician’s privileges was not having their head shaved. Masha’s gift also initiated a courtship with her future husband, Morris Rapoport. Both had been transported to a Displaced Persons Camp in Bergen-Belsen, Germany, where they met during a dance party.

“My mother was playing her mandolin on that night,” daughter Gail Rapoport Levin, of Deerfield, says. “My father turned the pages on a music stand for her. They fell in love.”

Decades later, while Levin and her brother, Northbrook resident Ken Rapoport, cleaned out their childhood home in Lincolnwood, they found their mother’s mandolin.

It was resting behind a handful of suitcases and an assortment of toys in a basement storage closet.

The siblings then donated it to the Illinois Holocaust Museum and Education Center in Skokie. The cherished instrument has been on display there for more than 12 years.

“I’ve spoken with students soon after they had taken tours at the museum,” Gail Levin, 59, says. “I’ve told them my mother’s story. I’ve also told them I’m not much older than their parents, and that I could be one of their aunts. The Holocaust wasn’t that long ago, but education must continue.

“Our nation’s youngsters have to hear stories like my mom’s, as well as stories about others who didn’t survive. What happened to Jews at the time of World War II can never be forgotten. Something as horrible as the Holocaust could happen again.”

Northbrook-based Jewish Community Centers (JCC) of Chicago is doing its part to keep those stories alive and honor the legacy of survivors like Masha—forging a partnership with Violins of Hope, an initiative that showcases Jewish stories of resilience, resistance, and unity.

From April to September 2023, a private collection of more than 70 meticulously restored violins, violas, and cellos—played by Jewish musicians before and during the Holocaust— will be presented throughout the Chicago area and Illinois via cultural exhibitions, performances, and community education.

JCC Chicago and its partner agencies, including the Illinois Holocaust Museum and Education Center, University of Illinois, and an array of schools, libraries, and synagogues, aspire to collectively reach more than 100,000 community members of all races, religions, ages, and abilities.

Israeli violinmakers Amnon and Avshalom Weinstein—the spirited father-and-son duo behind Violins of Hope—have spent the last 20 years collecting and repairing Holocaust-era violins and other stringed instruments from around the world, some with the Star of David on the back and others with names and dates inscribed in the instrument.

Their devotion, through restoration, has helped reclaim the lost heritage of instruments, and given voice to the victims. Violins of Hope delivers essential messages of hope, harmony, and humanity.

JCC Chicago is calling on the public to search attics, basements, garages, and storage units for invaluable pieces of history—like a certain mandolin—that can be used to tell compelling stories and raise awareness during Violins of Hope’s six-month endeavor next year.

The British Army liberated the Bergen-Belsen Displaced Persons Camp in 1945. Morris and Masha Rapoport arrived at Ellis Island in New York Harbor in 1949 and received visa sponsorship from a Virginian. The couple settled in Chicago’s Albany Park neighborhood in 1950, with Morris finding work as a general contractor and Masha working as a seamstress.

“My father was a hard-working man and excellent at what he did for a living,” says Gail, who works with her husband, Bruce, at RapSessions, Inc., a market research consulting firm in Northbrook.

“He built houses in Skokie, Chicago, Lincolnwood, Wilmette, and Northbrook, to name some of the communities, and I have memories of Dad doing estimates at the kitchen table.

“He wanted to build a house for us before he retired—at the time, his only two grandchildren were my children (Mac, now 26, and Danielle, 30, each a University of Michigan graduate). And he did just that. It was a gift for me to work closely with him when he built it in Deerfield.”

“My mother (who passed away at age 85, in 2009) was, like a lot of Holocaust survivors, overly protective of her children, and she and my father kept to themselves,” Levin continues. Levin, who needed only three years to graduate from Niles West HS, studied journalism at Ohio State University but landed jobs in market research and advertising after her days as a Buckeye. She launched RapSessions, Inc., in 1989.

Masha, the youngest of seven children, was 20 and living in the small industrial town of Bedzin, Poland, when she toiled as a seamstress making uniforms in a factory. Bedzin is a half-hour train ride from Auschwitz.

The Nazis oversaw forced labor at the factory.

“My mom worked for a man named Alfred Rossner,” Levin says. “He had Jewish friends and made a deal with the Nazis—for every factory employee, two family members would be spared immediate deportation to a concentration camp.

“Alfred was like Oskar Schindler,” she adds. Masha had to take a train ride to Auschwitz on August 6, 1943. Word got out, shortly after her arrival, that auditions would be held for an all-female orchestra.

A story of survival begins.

Followed by a love story.

JCC Chicago, founded in 1903 and rooted in Jewish values, offers a life-affirming journey fostering a connected, inclusive community. With a focus on growing good kids and building connections, its mission is to strengthen the Jewish community, from generation to generation. Visit jccchicago.org/violins-of-hope/and violins-of-hope.com for more information.