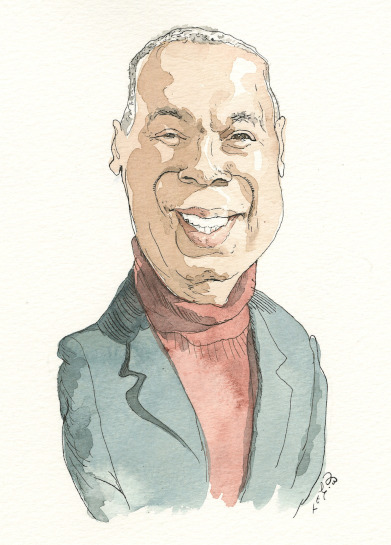 Three-time UCLA men’s basketball champion Larry Farmer sits in a conference room at his new employer—Woodlands Academy of the Sacred Heart in Lake Forest—and recalls the moment he turned down John Wooden’s offer of … jelly beans.

Wooden was UCLA men’s hoops coach at the time, a man in the midst of guiding Bruins teams to an unprecedented seven consecutive NCAA championships.

Farmer was a sought-after, 6-foot-5 forward recruit at the time, a boy who had almost quit basketball after his sophomore season at Manual High School in Denver.

“There I was on a Sunday, on the third and final day of my college visit to UCLA,” Farmer says. “In those days, you didn’t get to sit down with the head coach—the ‘closer’—until day three of the weekend. Coach Wooden was a modest, slightly built man. And a legendary coach in the making. Right away he asked me if I wanted any jelly beans from the jar on his desk.

“I told him, ‘No, thank you.’ I was too nervous to eat anything. But he put me at ease, mostly because we talked about academics, a little religion, ROTC, and other non-basketball topics. He even recited poetry. Coach Wooden was genuinely interested in getting to know me, the person, during my time in his office.”

On November 17, the 71-year-old Farmer, a college and professional basketball coach from 1973-2018, became 1-0 as head coach of the basketball team at Woodlands Academy, an all-girls college-prep high school.

“Coaching at the high school level was something I’d envisioned decades ago,” says Farmer, whose final stint in college coaching ended as an assistant men’s basketball coach at Western Michigan University in 2018. “Had I been lucky enough to play professionally for 10-12 years, I saw myself taking a coaching position at a high school. Unlike in coaching positions at the college and pro levels, you get to mold high school athletes, on and off the court.”

Friends had warned Farmer, a Gurnee resident, that retirement would bore him to rivers of tears. But he loved working out three times a week at a gym and heading out to a theater complex to watch a movie and inhale free popcorn practically every Tuesday.

He started writing a book, too. Role of a Lifetime will be available for readers on February 21, 2023.

“I was enjoying retirement,” Farmer says. But a void in his career gnawed at him earlier this year.

“I didn’t want to be sitting at some senior center one day, regretting that I never coached high school basketball,” says Farmer, who, at the oh-so-tender age of 30 in 1981, landed the coveted job of UCLA men’s basketball coach and guided squads at his alma mater to a combined record of 61-23 in three seasons.

His message to Woodlands’ Wildcats at the team’s first gathering last month was Wooden-esque.

“I told the girls, ‘I’m not here to try to win games,’ ” Farmer recounts. “ ‘I want nothing more than to help you become successful.’ ”

Wooden, a 10-time NCAA champion coach who retired in 1975 with a cartoonish career record of 620-147, died in 2010 at the age of 99. But his definition of success has a shelf life of forever: “Success,” he believed, “comes from knowing that you did your best to become the best that you are capable of becoming.”

“That,” Farmer says, “is our basketball team’s foundation at Woodlands Academy. My players have heard a lot about John Wooden from me and the impact he had on me as a player and as a person. One of Coach Wooden’s rules was to acknowledge the success of your teammates. During my time at UCLA, whenever a player scored a basket off a pass, he’d point to the player who had delivered the pass while hustling back on defense.

“One of my players at Woodlands did that in a practice one day. I stopped the practice immediately, smiled, and yelled, ‘That’s what we do here!’ You know what? I’m having more fun at practice than the girls are.”

Farmer was a regular on the bench as a member of Manual High’s sophomore basketball team in the late 1960s. A fun sport had become a dreary activity. He’d logged more minutes of game action, barely, than the team manager had. The thought of burying his high tops six feet under pitched a tent in his mind.

“Last game of the season, the varsity and junior varsity teams needed players from the sophomore team,” Farmer says. “That meant that I would jump from last guy on the bench to the team’s eighth guy. Coach put me in with two minutes left. The first shot I took, I kind of threw it toward the rim. Somehow it went in.”

Farmer took two more shots in the waning moments, netting both of them to finish with six points.

“An assistant coach pulled me aside after the game and encouraged me to work hard, to push myself, in the offseason. I chose to stick with basketball. Getting that opportunity, in that final game … divine intervention. Had to be.”

Farmer became a fixture on Colorado newspapers’ all-state basketball teams after his senior season. Division-I college coaches courted him. He averaged 12.8 points per game in his final UCLA season and got drafted by the Cleveland Cavaliers of the NBA and the Denver Nuggets (when Denver was an ABA franchise).

He did not play pro ball.

“Years later, I got the chance to introduce Coach Wooden to my children at a Final Four,” says Farmer, who coached men’s basketball at Loyola University-Chicago from 1998-2004. “He was super busy, but he found time to spend with them. You should have seen my kids’ attentive looks as they listened to Coach Wooden and talked with him.”

“It reminded me of that day Coach Wooden got to know me in his office on my recruiting trip,” he says. “I loved John Wooden. You know how you can tell when someone loves you back? By the way they treat your children.”