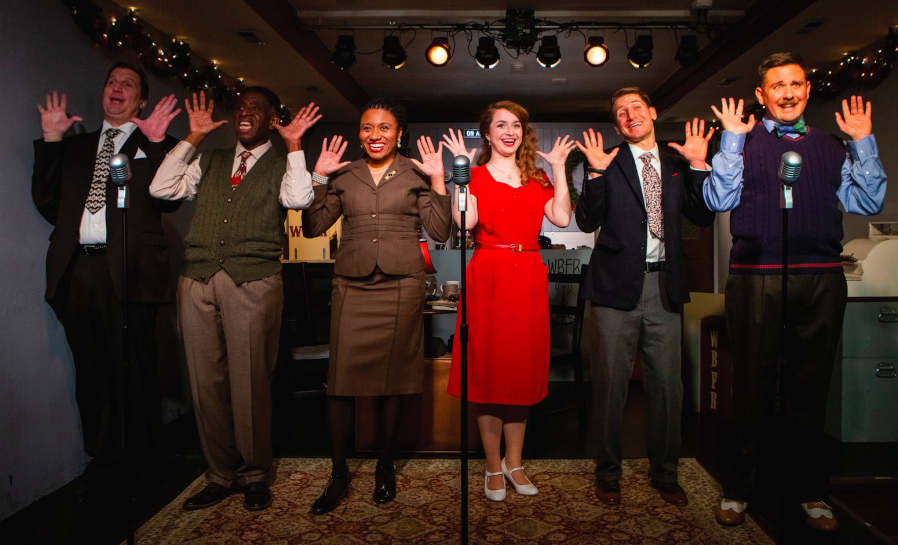 Oil Lamp Theater got its start in 2005 in a condo in Chicago’s Lakeview neighborhood. Its founder, Keith Gerth, was inspired by episodes of the Dick Van Dyke show he watched as a boy, during which the main characters, Rob and Laura Petrie, would entertain friends in their home with musical and theatrical entertainment.

Fast forward to 2022, and Oil Lamp has evolved into a professional theater company with dozens of productions under its belt. It incorporated as a nonprofit in 2012 when it moved to Glenview and established a 60-seat theater downtown.

One of Oil Lamp’s early productions—one that will be staged for the 9th and final time this holiday season—is an adapted version of the iconic Frank Capra film, It’s a Wonderful Life. The theater space is transformed into the studio of New York radio station WBFR on Christmas Eve in 1946 for a reading of the famous Jimmy Stewart and Donna Reed film, complete with sound effects and audience participation. 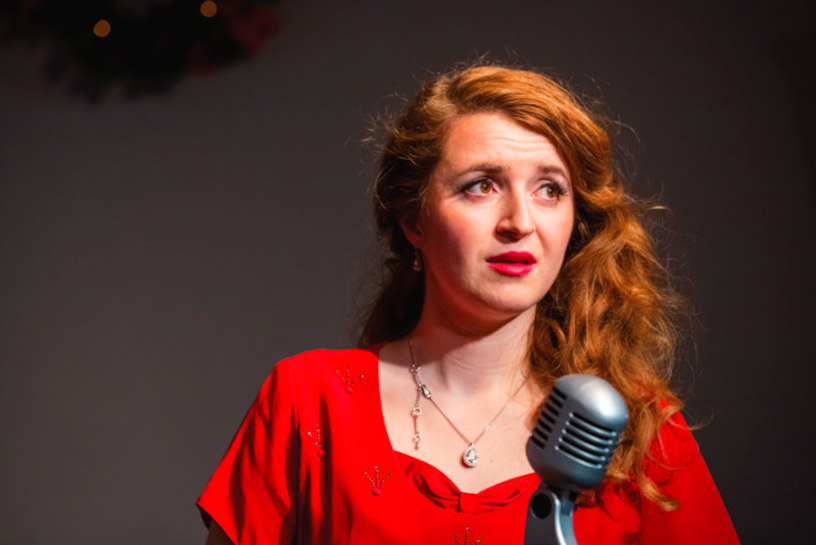 Stephen Smith has worked on previous productions of Oil Lamp’s It’s a Wonderful Life as a performer, Assistant Director, and Director. Smith is again directing the theater company’s 2022 version of the play. He says the script, for the most part, follows that of the film.

“It’s adapted from the film, and many of the lines you’ll recognize, like ‘Every time a bell rings an angel gets his wings’,” Smith says. “We have to tweak some parts of it to get it on a stage, but it’s definitely based on the movie and follows the movie pretty closely.”

Smith, a retired educator, says he’s always been an avid theater goer and has enjoyed his various roles with Oil Lamp Theater because of the company’s professionalism. All involved with the production—actors, designers, directors—are paid contributors. 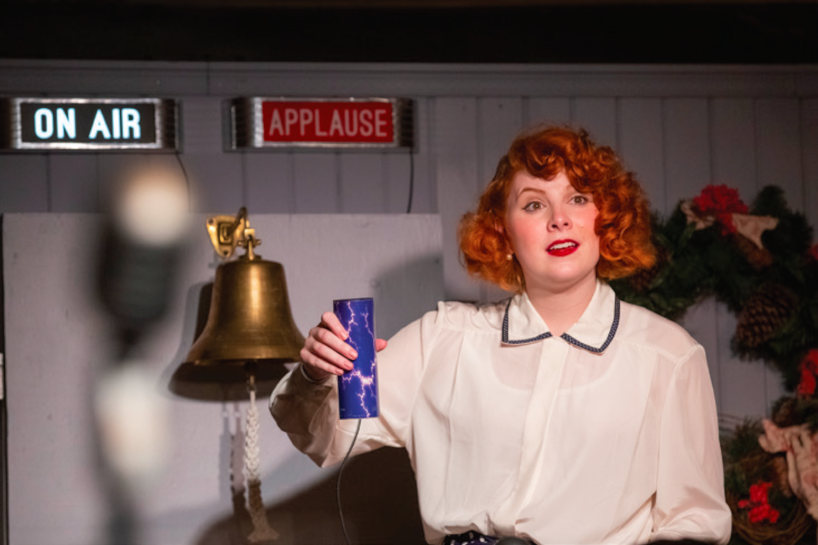 “What is special about Oil Lamp is just the atmosphere of the lobby as you walk in. It’s so comfortable. It’s almost like you’re going into someone’s living room,” he says. “The other thing is that the actors, the employees, have great respect and dignity. They treat the audience with respect, and there are people who never miss a production.”

Mary Margaret McCormack, who plays the role of Mary Hatch in It’s a Wonderful Life: A Live Radio Play, grew up in Woodstock and has been performing on stage since she was 7 years old. She started with community theater and performed through middle school and high school before studying theater in college. 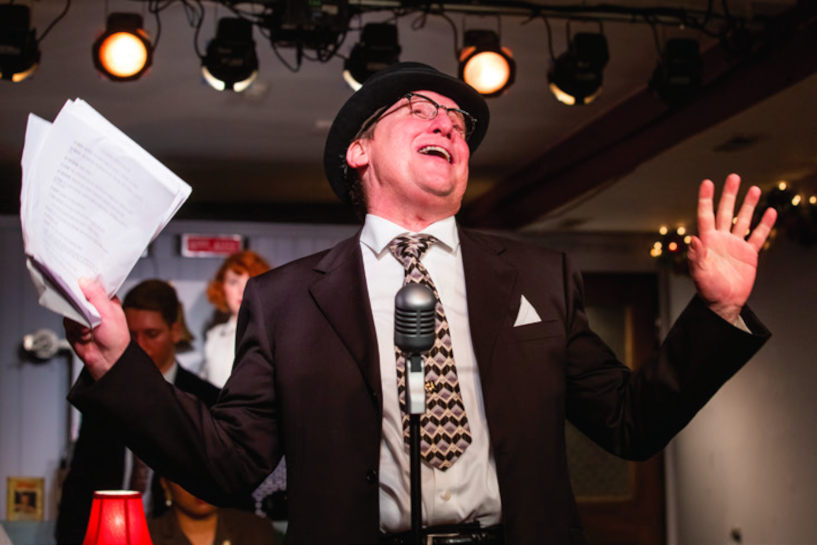 “For a little while I thought I wanted to be an opera singer, but my heart wasn’t in it and what I really found I liked with theater is that connection with the audience,” McCormack says. “I feel like in a place like Oil Lamp, it’s a small intimate space. You can see the audience, and you can absolutely hear their reaction and that’s really nice.”

McCormack played the same role as Mary Hatch last year and says what she loves about the show is the holiday cheer it engenders and how it lifts the spirits of the audience.

“It’s really sweet because this is such a touching story and we can immediately see how this affects people,” she says. “We see people smiling. We see people wiping away tears, which is the sweetest thing.”

She adds that what she appreciates about her character in the play is that she’s complex and, in many ways, drives the narrative of the story. 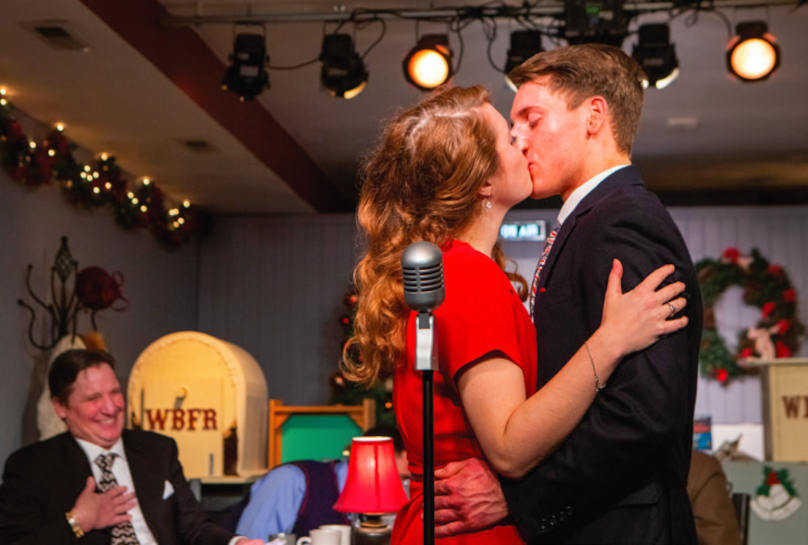 “What’s nice about playing Mary Hatch is that she’s not your typical ingénue. A lot of the times she’s the driving force behind George Bailey because she’s the one that comes up with the ideas that often help save the day,” McCormack says. “She’s not just the love interest, but someone who is integral to the plot, which I very much appreciate. It makes it a lot more of an interesting character to play.”

Like Smith, McCormack says she enjoys her work with Oil Lamp because of the quality of the cast and the production team.

“Because I’ve done it so much, it’s a professionalism that they really bring. They approach it not just as a hobby like some community theaters,” she says. “It’s a business, in a good way. Their mission is to put on good performances for the audience and the actors.”

It’s a Wonderful Life: A Live Radio Play runs from November 25 through December 30 at the Oil Lamp Theater, 1723 Glenview Road in Glenview. For more information and to purchase tickets, visit oillamptheater.org.