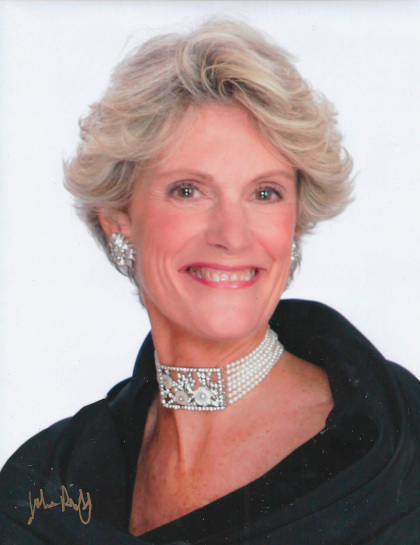 Ellen Stirling changed rooms when she entered them.

“She walked in and was like a breeze of elegance and warmth,” says photojournalist Ellen Warner. “She was, by nature, beautiful, but beyond that she had a great sense of style.

Lake Forest lost a beacon on November 10. Stirling—owner and CEO of her family’s business, The Lake Forest Shop—died peacefully in Lake Forest after a lengthy illness.

“Ellen was elegance personified,” says lifelong Lake Forest resident Ann Marie Scheidler, a writer, editor, and publicist. “She also was kind and utterly devoted to her family, business, and community. Her mission at The Lake Forest Shop was always resolute—that’s what made her customers loyal, year after year. They appreciated the exclusivity of the brands offered at her shop.”

David Sweet, of Lake Forest, an author, journalist, and friend, attended The Lake Forest Shop’s 100th anniversary on September 15. Stirling emanating pride and joy is what he remembers most about the event.

“The Lake Forest Shop is an institution in town,” Sweet says. “What Ellen did to pull it from the brink of bankruptcy was amazing. She was passionate about saving the shop for her father (Volney). She then used that same drive to make The Lake Forest Shop flourish and thrive for years.”

Stirling attended the University of Chicago, majoring in art history, and continued her studies at the University of London (1972-1975). She and her husband, Jim, lived in London early in their marriage. There she connected with English cousins and formed friendships that were among the most important in her life. She also had a brief career as a travel writer for Passport Magazine.

In 1987, with three young daughters at home and no retail or business experience, Stirling took the reins of a business that her paternal grandmother, civic leader Margaret Baxter Foster, had launched in 1922.

She got to work closing three struggling store branches, re-naming and branding the store, modernizing The Lake Forest Shop inventory and leading a renovation of the original location in Market Square.

“Ellen was a brilliant business woman, and she worked incredibly hard to make the shop a success,” a loyal patron says. “She was always happy when the shop was full of customers, many of whom became dear friends.”

Service and philanthropy were instinctive to Stirling. Her work with the Rehabilitation Institute of Chicago (now the Shirley Ryan AbilityLab) and its founder, Henry Betts, M.D., along with architect and accessibility advocate Jack Catlin, formed Access Chicago, a nonprofit that addressed wheelchair accessibility for people with disabilities in 1972.

She served on the Advisory Board of Lake Forest College’s Oppenheim Center for Entrepreneurship and Innovation. She was also a board member of Lake Forest Open Lands and Elawa Farm Foundation and a member of The Lake Forest Garden Club.

The History Center of Lake Forest-Lake Bluff named Stirling its Local Legend in 2016. The distinction—all previous individual awardees were men—honors someone who has contributed significantly to the community and the world. Among the early honorees were Jim Lovell, Adrian Smith, and John Bryan.

“She grew up in a culture where people didn’t boast about their accomplishments, and, although Ellen had many, she adhered to that principle,” Warner recalls.

“Her warmth,” Stirling’s longtime friend adds, “drew people to her. Ellen was always understanding, always supportive. ‘I know you’ll do well!’ was a comment I heard from her more than once when I fussed about a speech or presentation I had to give.”

“I always found her to be a great listener,” Sweet reflects. “Ellen was genuinely interested in what you had to say. I’ll never forget her smile, her friendliness, her grace, her elegance.”

Memorial contributions can be made in Ellen Stirling’s name to Lyric Opera of Chicago, Lake Forest Open Lands, and Northwestern Medicine Lake Forest Hospital. A service will be planned for spring 2023.