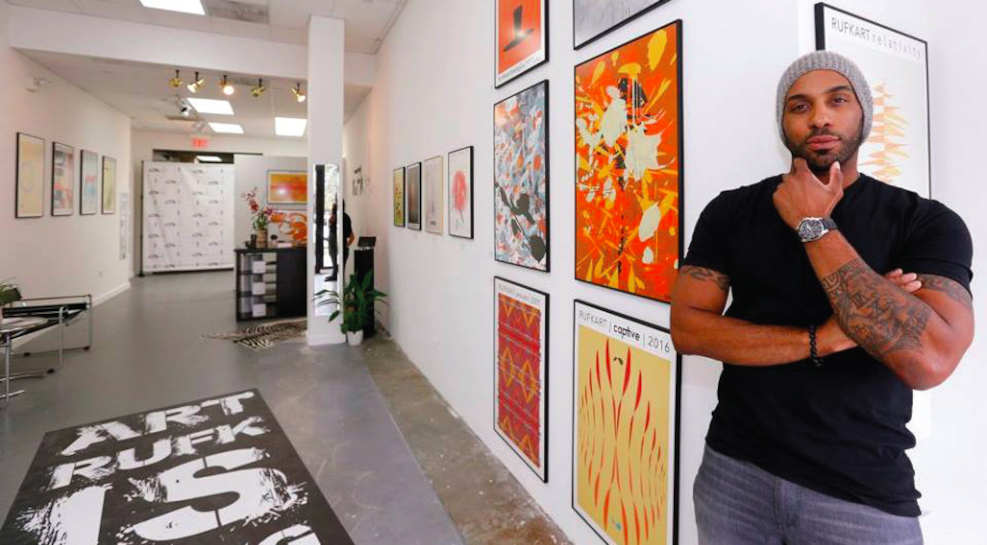 When Chris Falcon was a boy, his mom would often drop him off at his uncle’s gym on her way to work, where he would spend the day. He liked to pretend to be one of the muscle men lifting weights but after a while his uncle would shoo him away to a corner somewhere where he would work with his pens and doodle pad.

“I’ve always been a creative naturally. I was the kid who was always drawing and doodling and writing stories,” Falcon says. “But during that process, this really creative kid did fall in love with fitness entrepreneurship.”

Falcon grew up in Highland Park after his family immigrated from Cuba in 1967, well before he was born. Like his uncle, he started a gym of his own, Reactive Performance Enhancing Center, 16 years ago in Glenview. His second location in Highland Park is under construction in the former E Street Denim Building behind Madame Zuzu’s Emporium.

“I saw that my uncle was able to create experiences for people, all the while doing something that he really loved to do, connecting with people and being a respected part of the community,” Falcon says. “I knew I wanted to have that same feeling at some point in my life and so I decided to make it happen.”

Falcon says the fitness industry has many players, some of which are huge operations. The “big-box” gyms have a business model that is based on monthly membership fees. The idea is to get as many to sign up and hope that just a small percentage will show up to work out.

“I’m actually the complete opposite, more of a boutique style facility and I do everything that I possibly can to make people want to be there,” he says. “Part of us doing the opposite is recognizing that we’re dealing with more than just bodies. We’re dealing with the people inside the bodies, so as an artist myself, I always like to look at things from different angles and flip things upside down.”

This “thinking-outside the box” approach leads Falcon to want to create an experience that people are going to want to share with others and that other people will want to be a part of. He says it’s about finding ways to combine work passion and play into one seamless experience.

“From the moment you come into my facilities, you’ll see that art is everywhere. Music is not just something that’s in the background, but it’s something that is there for people to connect with,” Falcon says. “We just treat our clients differently. We want you to be there, we learn who you are, and you’ll become a part of a family, part of something real.”

Falcon has featured his own artwork at his Glenview location and plans to feature works created by artists from the community in his new space in Highland Park. A number of artists have already been lined up to have their art featured, and one artist is painting a large mural, currently in process, which will cover one of the gym’s walls.

“As an artist, for a while I have wanted to have my brand help emerging artists get out there and have their time in the sun,” he says. “My space in Glenview is loaded with my artwork, but now with this new venture, the Reactive Artist Collab, I really wanted to help other artists.”

Falcon sits on the board of the Art Center of Highland Park and says he wants to do his best to connect with the broader local artist community, and just not those who work with paint. He’s planning a fashion show for some time in 2023 with an emerging designer.

“We are going to find as many ways as we possibly can to use our space and the passion that we have for fitness to also bleed over into the passion that I have for the arts and helping and supporting artists,” Falcon says. “I want to give them as many opportunities to thrive as I can.”

It’s a unique vision of the world Falcon has shaped for himself, one of fitness entrepreneur, advocate for the arts, and gallerist. We’d all be so lucky to integrate our varied interests in such fashion.

“I think the biggest thing for me is that it’s passion. Passion is the biggest reason why I believe I’ve had any success in this industry or why people might want to work with me and my team,” Falcon says. “I like to tell people that I create amazing soil for anything to grow as long as it’s positive, and that’s what happens in my spaces.