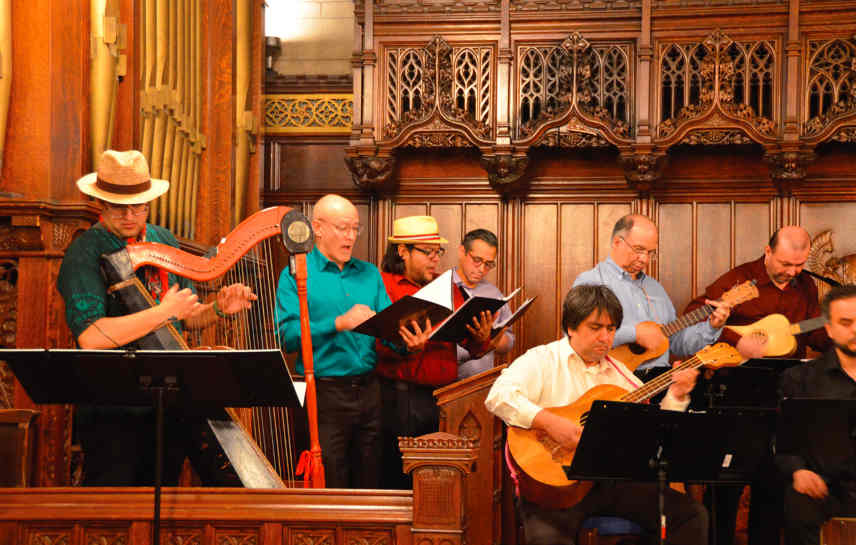 The Newberry Consort is pleased to announce the return of its annual holiday tradition, the popular “A Mexican Christmas” concert, which will be guest directed by Ellen Hargis, former co-artistic director of the Consort.

In this beloved holiday concert, audiences are transported back to 17th-century Mexico City at Christmas time, as a cast of nearly 30 musicians recreates the glorious singing of cloistered nuns soaring over the walls of their convent and filling the square while a street band plays villancicos—joyful folk music of praise and celebration.

The concert will be held at 8 p.m. on Friday, December 9, at St. Luke’s Episcopal Church in Evanston with projected supertitles in both English and Spanish.

To encourage more families to attend, The Newberry Consort has reduced the ticket price for this show to only $25 for adults and $10 for students with a valid student ID. The concert is free for all children under 16. The Consort is also offering a special Family Package where people can buy a 10-person pass for only $100.

“We felt it was important to make this concert as accessible to families — especially families who may have limited means—as possible,” says Liza Malamut, The Newberry Consort’s new artistic director. “We’ve found in the past that when Latinx families attended the show, many of them were surprised to learn of this rich, classical musical heritage from Mexico and we wanted even more people to be exposed to this beautiful part of Mexican culture.”

This sumptuous program will once again feature a choir of women’s voices singing the music of the convent—including performing “Missa Bonae Voluntatis,” from a set of 16th century Mexican choir books housed at the Newberry Library—as well as musicians from EnsAmble Ad-Hoc, a group that specializes in Latin American and Spanish early music led by specialists Francy Acosta and Jose Luis Posada. These musicians will create the rich, jubilant folk music that would have been heard in the plazas at Christmas.

The music is from both Old and New Spain and features villancicos by Juan de Padilla from the Puebla Cathedral Archives, as well as treasures from many other manuscripts, researched and edited by the Newberry Consort’s artistic directors. Exuberant singing and rarely heard instruments including the bajón (Spanish baroque bassoon), leona (large guitar from Veracruz) and the quijada de burro (a percussion instrument made from a donkey’s jawbone), will bring the soundscape of a Mexican Christmas to Chicago.

The concert was first conceived by Hargis after she became interested in the ancient Mexican choir books housed at Newberry Library that were originally from the Convento De La Encarnacion, which existed in Mexico City from the late 16th century through the 19th century. Hargis researched the music, adapted it for modern musicians and then presented it in several different concerts—first in 2016 as part of a concert entitled “Juan de Lienas Vespers,” and later as part of “A Mexican Christmas.”

“A Mexican Christmas” has been performed in Chicago every year since 2018 (with the exception of 2020), and in 2021, The Consort also released a live recording of the concert, which can be purchased on Amazon. There is also a DVD that has the music set to images that are projected during the concerts, which will be available for purchase at the concerts.

“A Mexican Christmas” will be performed at 8 p.m., Friday, December 9, at St. Luke’s Episcopal Church, 939 Hinman Avenue, in Evanston. Tickets can be purchased at the event.