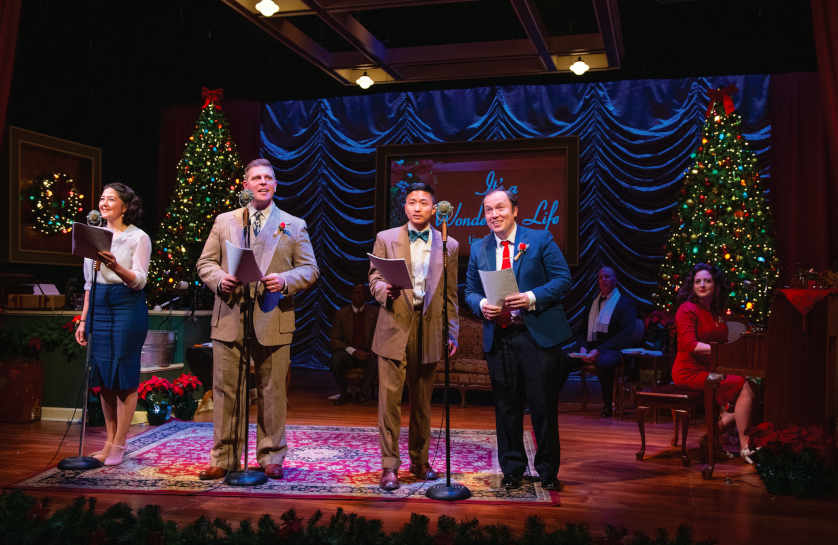 True to tradition, Chicago theaters are staging a wide variety of festive plays, musicals, dance, and comedy offerings this holiday season. In support, the League of Chicago Theatres will create a comprehensive Holiday Theatre Guide that will be available for distribution in mid-November.

The online Holiday Guide is available at chicagoplays.com.

On the lineup is a Christmas classic as several theaters present the holiday favorite, “A Christmas Carol.”

Goodman Theatre’s must-see annual production has enchanted audiences for more than four decades, runs through December 31. Metropolis Performing Arts Centre presents an adaptation filled with warmth, humor, music, and holiday cheer, December 1 to 24. Complete with falling snow and magical illusions, Drury Lane Theatre for Young Audiences brings a visually stunning one-hour experience for children of all ages, November 25 -December 30.Told through puppetry and music, the striking holiday experience of Manual Cinema’s “Christmas Carol” comes to brilliant life on stage for the first time at Writers Theatre, November 29 to December 24. A Theater in the Dark also presents “A Christmas Carol in the Dark,” a streaming audio drama perfect for those who love the spookier elements of Dickens’ story through January 1.

Family-favorite holiday movies also come to life in the suburbs with “Elf The Musical” at Drury Lane Theatre through January 8, “Irving Berlin’s White Christmas” from Music Theater Works at North Shore Center for the Performing Arts, December 15 to January 1, and two productions of “A Christmas Story, the Musical”—one at Jedlicka Performing Arts Center, November 25 to December 10, and another at Marriot Theatre in Lincolnshire through January 1.

For more than 20 years, American Blues Theater has treated audiences to a live retelling of the Frank Capra classic in a 1940s radio broadcast tradition, making “It’s a Wonderful Life: Live in Chicago!” the second longest-running holiday play in Chicago. Running November 23 to December 23 at the Chopin Theatre. Oil Lamp Theater will perform its version of “It’s a Wonderful Life: Live Radio Play” on stage November 25 to December 30.

The beloved characters from Jane Austen’s Pride and Prejudice return for the third and final installment of the Pemberley trilogy, “Georgiana & Kitty: Christmas at Pemberley,” at Northlight Theatre, November 25 to December 24.

Holiday spectacle arrives downtown with “A Magical Cirque Christmas,” featuring an evening of dazzling performers and breathtaking cirque artists, accompanied by live holiday music at Broadway In Chicago at the CIBC Theatre, December 6 to 11. Then “Cirque Dreams Holidaze” wraps a whimsical, Broadway-style musical infused with contemporary circus artistry into the ultimate holiday gift for the entire family, December 22 to 24 at the Auditorium Theatre of Roosevelt University. “The Steadfast Tin Soldier,” based on Hans Christian Andersen’s story about a little tin soldier who never gives up, brings gorgeous spectacle of music and movement to Lookingglass Theatre through January 8.

Watch as the improvisers at ComedySportz sing and dance their way through a made up Hallmark-channel style spectacle that YOU help create in “Trapped in a Holiday Musical,” through December 17.

Enjoy some adult comedy this holiday season when Cindy Lou Who, now 40, retells the story of the sordid events after she met the Grinch in the adults-only romp “Who’s Holiday!” Presented at Theater Wit, November 25 to December 30. Then it is guaranteed yule laugh a whole latke as The Second City unwraps the most wonderful time of the year in their nut-cracking-est, jingle-bell-ing-est revue ever, “Best of the Holidays,” November 21 to December 31, and “What The Elf?,” the original sketch, variety, and improv celebration of the season, through January 1, at UP Comedy Club.

For a comprehensive list of Chicago productions, visit the League of Chicago Theatres website, chicagoplays.com. Available half-price tickets will be listed at hottix.org.