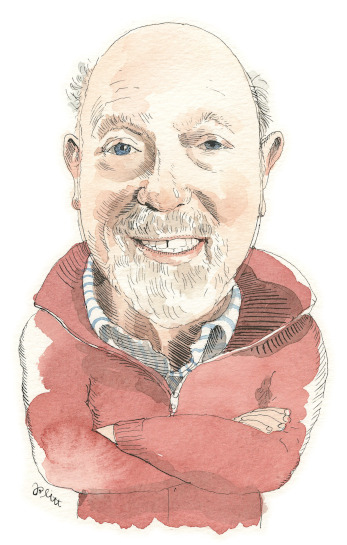 Miller—a resident of Lake Forest since 1972, Lake Forest College’s emeritus Archivist and Librarian for Special Collections, and a man whose knowledge of Lake Forest is Pacific Ocean-vast—had crammed his auto with a voluminous number of books one day in the 1980s.

“That was a time in Lake Forest when many started flipping their houses,” Miller, 79, recalls. “Books were pouring out of houses then, with some of the art books weighing 10 pounds each. I filled that Volvo to the brim.

“As I was driving, something didn’t feel right.”

His car was hurting, creaking, listing on land.

Miller took it to a mechanic and was told the Volvo’s struts had suffered extensive damage.

“Had to buy a new Volvo,” the uber-likable Miller says, cracking a warm smile and later adding he has owned nothing but Volvos since, including the one he’s been steering since 2008.

Miller has written several books, mostly about Lake Forest, since that tome-laden vehicle was given last rites. His latest—Architectural Lake Forest: A Guide to National Register Historic Districts and Properties in Lake Forest, Illinois, published by Lake Forest Preservation Foundation—could fit inside a glove compartment.

Lake Forest has five districts and more than 15 Landmarked buildings on the National Register of Historic Places.

The reference manual is a must-have for anyone interested in learning about the handsome structures standing within the city’s 16 square miles, and it succeeds the Guide to Lake Forest’s National Register Historic Districts and Landmarks, published in 1994.

“There’s more breathing room for the buildings and houses in Lake Forest than you see in other North Shore suburbs,” says Miller, who worked at Lake Forest College from 1972- 2013. “And the different styles of homes in Lake Forest … there are so many of them. It’s a community with remarkable architecture and landscaping.

“Most people,” he adds, “like the way Lake Forest looks.”

LFPF couldn’t have tapped a better historian than Miller to update and enhance the guide. Miller and Shirley M. Paddock cowrote Lake Forest Estates, People, and Culture in 2000; he then collaborated with Kim Coventry and Daniel Meyer to pen Classic Country Estates of Lake Forest: Architecture and Landscape Design, 1856-1940, in 2003.

“What I enjoyed the most about putting the book together was the teamwork part,” Miller says.

Miller, half-Dutch, grew up in Kalamazoo, Michigan, and worked a lot as a youngster, particularly in the field of gardening. Miller tended his own vegetable garden, located about a mile from his house.

“When I had my tonsils taken out, I received get-well cards from people who told me they would take good care of my garden while I was recovering,” Miller says.

He landed several gardening gigs in Kalamazoo and, during the summers, toiled in soil at homes in Watervliet, a nearby rural farming community (pop. 1,648, today). The name of the city in northeastern Berrien County is Dutch for “where the waters meet.”

“People hired the dumb kid to work in their gardens,” Miller cracks.

For six years, while collecting those advanced degrees, Miller worked at Newberry Library in Chicago. He started as a desk attendant and ended up as head of public services. In between? Mr. Arthur Hawks Miller ran Newberry’s main reading room.

He’d met his future wife, Jan, when both were juniors at Kalamazoo College. They got married in 1967 and raised children Andrew, now a Winnetkan, and Janelle (Moravek), of Libertyville.

But back to Lake Forest, the topic Miller knows as well as Galileo knew about the four moons of Jupiter.

“Stables were there before Market Square was built,” Miller says. “It reeked. People would get off the train in downtown Lake Forest and immediately hear the buzz-buzz-buzz of horseflies coming from the stables.”

An image of the gorgeous Deer Path Inn, a National Landmark designed in 1920 by architect William C. Jones at the behest of local estate owners, adorns the back of Architectural Lake Forest.

“Built in 1928, it was inspired by a 15th century half-timbered and stucco English manor house in Chiddingstone, Kent, England, and remains one of the city’s most popular and defining destinations,” Miller writes in the “Downtown and Vine-Oakwood” chapter.

So are property owners.

“(They) deserve the major share of thanks for carefully stewarding their homes and landscapes,” Miller pens. “Photographing properties while dodging dumpsters and service vehicles showed us how seriously homeowners take their responsibilities.

“To them and their predecessors, including those whose homes could not be included here,” he continues, “we extend our heartfelt gratitude.”