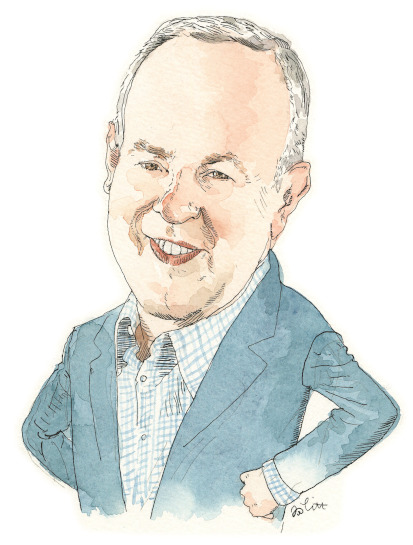 Former New Trier East High School JV wrestler of the year David Golder isn’t a hard man to pin down off the mats.

Named the chair of the Jewish United Fund/Jewish Federation of Chicago’s Board of Directors on September 15, the 65-year-old Golder—a former Winnetkan and a Glencoe resident since the early 2000s—has always, always, always been all about everyone but … David Golder.

“I believe strongly in servant leadership,” Golder says, referring to the approach to leadership that asserts the most effective leaders strive to serve others, rather than establish power or exert control.

His late father, Stanley Golder—one of Chicago’s pioneers in the field of venture capitalism and a man who built furniture in his basement and a sterling reputation as a serial philanthropist—held an identical belief.

“My father,” Golder says, “enjoyed tremendous business success. But he also found the time to show, in many ways, a commitment to giving back, one being the founding, with my mother (Joan), of the Golder Family Foundation.

“Many people told me, after his death, how well he treated people. A number of others mentioned their appreciation for the time my father spent mentoring them.”

A number attached to the Jewish United Fund of Metropolitan Chicago: 500,000. That’s how many Chicago-area people—Jewish and non-Jewish—the community-driven humanitarian organization has positively impacted this year. The Jewish United Fund (JUF) believes in the extraordinary power of its resilient community to unite, empower, help, and heal.

For more than 120 years, JUF has served people of all faiths in Chicago, Israel, and across the globe. It’s a welcoming and inclusive community, inspired by Jewish values, committed to eradicating hunger, isolation and inequities, and uplifting people to find health, harmony, unity, prosperity, and peace.

JUF’s wonderful, enduring mission, in essence: “To amplify our collective strength to make the world a better place—for everyone.”

The world became a wobbly place when Russia invaded Ukraine in February. Ukraine was home to 200,000 Jews then. Tens of thousands hid from explosions in bomb shelters or synagogues, and thousands more abandoned their homes to flee the fighting.

Among its other “How We Help” programs are Health and Security; Israel and Overseas; Jewish Experiences; Diversity, Equity, and Inclusion; and Advocacy and Engagement.

“We do important stuff; we do cool stuff,” says Golder, who, in addition to his vital JUF role, manages investment strategy as managing partner of Golder Investment Management, LLC, and oversees philanthropic operations as vice president and treasurer of the Golder Family Foundation.

“There are a lot of components to JUF; the range is wide.”

One of Golder’s priorities in the first year of his two-year term as chair of JUF/Jewish Federation of Chicago’s Board of Directors is to gain a deeper understanding of what draws younger folks to become connected to JUF and its calling.

Stanley Golder built tables and cabinetry in his Winnetka basement all those years ago.

His son plans to construct bridges—the figurative kind—for JUF. The ones that connect generation to generation.

“I have come to a place in life where I feel a tremendous responsibility to contribute all I can to the community,” says Golder, who previously co-chaired JUF’s Health and Human Services Commission, chaired JUF’s Government Affairs and Breakthrough Fund committees, and served as vice chair of the board from 2017-2019.

“JUF,” he continues, “has a long and widely respected legacy of leadership. We have an incredible opportunity to make an impact on so many levels in Chicago and around the world. I am truly honored to take on this role. People have asked me, ‘Are you ready for this?’ I tell them, without hesitation, ‘Yes!’ What makes it quite manageable, and rewarding, for me is the professional team we have in place. Our board leadership is fantastic.”

Golder, the NTEHS grappler, was a quiet teen and a focused student, with a small circle of friends. He majored in Speech Communications at Drake University and later collected a graduate degree in e-business at the University of Chicago.

One of his first jobs in his 20s was as a photographer’s assistant. Golder handled lighting duties and set up scenes for photographers employed by Better Homes & Gardens, Good Housekeeping, and Architectural Digest, among other magazines.

Years later he launched Lightfall Interactive Media and served as its president.

At the national level as a Jewish community leader, Golder is a member of the Board of Trustees of the Jewish Federations of North America (JFNA) and chaired the Domestic Policy & Government Affairs Council for JFNA.

One of the past chairs of the Board of Directors of the Illinois Holocaust Museum and Education Center in Skokie?

A past president of Temple Jeremiah in Northfield?

One of the past chairs of the Board of Trustees of Drake University?

You get one guess.

Neither does his wife, Carol, the chair of Open Communities, an Evanston-based organization that encourages fair housing practices through education.

David Golder likes to fly fish and play golf in his free time.

His inquisitor wants to know the best part of Golder’s golf game.

“Easy,” Golder begins, cracking a fairwaywide smile. “When I put my clubs away.”

No need to worry about Golder’s JUF “game.”