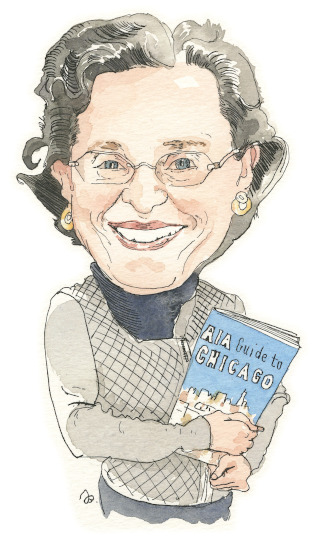 For Winnetka’s Laurie Petersen, who’s mad about Chicago architecture and thrilled to talk about it with anyone, a sit-down interview would not do.

“How about we walk/drive a short stretch of Sheridan Road near the Loyola (University) campus at Devon?” she offers in an email. “This is a road North Shore people drive on all the time, and it would be fun to show you some of the architectural treasures that are ‘hidden in plain sight.’

“By giving you a short, guided tour,” she continues, “I would focus on my love of Chicago architecture, especially the everyday buildings, and my evangelism that everyone should look around and look up.”

I’m all in. I’m up for learning from the engaging and knowledgeable Petersen, the editor of the new fourth edition of the AIA (American Institute of Architects) Guide to Chicago (University of Illinois Press, 2022).

And I’ve reached the point in my career where I can’t stand sitting anymore. Our adventure begins at a Starbucks in Wilmette on a drizzly, chilly Friday morning. We sit, briefly, but only because the journalist in me wants to jot down important details about Petersen’s life, like the names of her family members (husband Michael and grown children Claire and Will); where she grew up (Milwaukee) and attended college (Yale); what she does for a living (writer, for Chicago Architecture magazine); and what she does for fun (tour guide, for groups and a certain writer who still forgets that the Sears Tower became the Willis Tower way back in 2009).

But this feature shouldn’t be about Laurie Petersen, Laurie Petersen insists politely. It should be about the beauty and the strength and the variety of Chicago architecture and some of the compelling stories behind the structures that stand in the city’s 77 neighborhoods.

We head out to her car and then head south.

We chat about the AIA Guide to Chicago, the largest portable source of information on the city’s environment. The book serves both as an introduction to Chicago’s architecture for neophytes and as a sourcebook for those seeking to expand their knowledge beyond the well-documented buildings, notes the book’s “Guide to the Guide.”

Petersen has been an integral part of all four editions: 1993, 2004, 2014, and 2022, which contains almost 2,000 featured sites, compared to a tad more than 1,600 sites in the premier edition, and descriptions of two of the most significant recent projects—the extension of the Riverwalk on the south side of the Chicago River in the Loop and the 606, an elevated park and trail that runs east-west on Chicago’s Northwest Side.

She adores the striking cover photo of the latest edition, “because it captures the city of Chicago from a neighborhood’s perspective.” In the guide’s acknowledgements, Petersen writes, “The herculean efforts and clear vision of Alice Sinkevitch created the first edition of the book. I was honored to work with her on that endeavor.

“All subsequent additions and alterations,” she adds, “have built on that firm foundation.”

Petersen parks her vehicle near the Kirshbaum Building, 6560 North Sheridan Road. It was built in 1922 by Ronneberg, Pierce & Hauber. We get out and near the storefronts. Petersen tells me to look up at the Northwestern Terra Cotta Co.’s panorama of Chicago’s growth.

“Look up there, on the far left—that’s Fort Dearborn,” she says.

In between Fort Dearborn and a depiction of the newly completed Wrigley Building is a long panel showcasing the city’s contemporary skyline.

“Over there, on the far right, look at the smokestacks,” Petersen says. “A smokestack back then was a sign of progress.”

Petersen has admired the artwork dozens of times. The rookie admirer next to her scans the panorama a second time.

“So many people drive past this terra cotta mural of the Chicago skyline and never notice it,” she notes.

About a half-hour later, we stop outside the Mundelein Center (Mundelein College), 6363 North Sheridan Road. It was built in 1930 by Nairne W. Fisher and Joseph W. Mc- Carthy. “The first ‘skyscraper college,’ Mundelein’s thoroughly modern school for women was headquartered in the impressive fifteenstory tower,” the AIA Guide to Chicago informs.

Two colossal archangels—Uriel (Light of God) and Jophiel (Beauty of God)—flank the entrance. “Uriel holds a book inscribed with a cross and points skyward,” the guide describes, “and Jophiel holds aloft the torch of knowledge and grasps a celestial globe.”

Marvels Petersen, looking up: “It never gets old, looking at those.”

We walk some more, dodging phalanxes of Loyola University students at a couple of intersections. Lake Michigan looks dark gray and angry. The temperature dips, seemingly, a degree every other minute.

But my tour guide continues to exude warmth amid the chorus of chattering teeth. Petersen is entrenched, after all, in her element.

“Life is more interesting when you look around a big city and see beauty,” she says. “We’re so lucky to be so close to Chicago’s wonderful architecture. Chicago was a mecca for the best and brightest architects before and after the Great Chicago Fire (in 1871). I’m not a designer, but I’ve always liked reading about architecture and researching it.”

I learn that Petersen, as a youngster in Milwaukee, loved every second of every visit to the Art Institute of Chicago and Museum of Science and Industry. The University School of Milwaukee graduate majored in Art History at Yale and couldn’t get enough of college courses (Intro to Art History and Architecture History) taught by Professor Vincent Scully.

“You think I’m energetic about architecture?” says Petersen, laughing. “Compared to Vincent Scully, I’d be considered super calm. He had such passion for every subject he taught.”

Halfway on our return to Wilmette, Petersen unleashes her delightful sense of humor. It freezes the pen of her passenger.

And elicits a series of chuckles.

“Two things that annoy Chicagoans—trees at the end of the fall season, without any leaves on them, and being stuck in traffic—are two things I truly enjoy,” she says. “I can see the buildings better and spend more time looking at them.”

Purchase the print version of the new fourth edition of the AIA Guide to Chicago ($42.95) from your local bookstore, online retailer, or from the University of Illinois Press. E-book is also available.