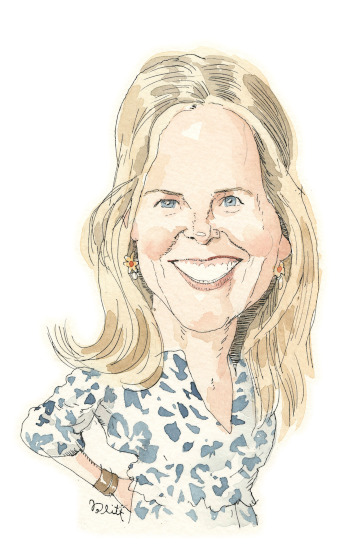 Katie Brickman has never sold ice to Eskimos, but she did sell leaves on autumn days to Winnetka neighbors with leaf-strewn lawns decades ago.

True story. She was Katie Powell back then, a grade-schooler at Faith, Hope & Charity with a little red wagon brimming with fallen leaves. She’d pull her wares up walkways, ring doorbells, flash her first-grade smile, and charge 10 cents per leaf.

“I can’t believe I was allowed to do that,” Brickman says, flashing a 48-year-old smile from the middle of a couch inside her Lake Forest home on a sun-splashed August morning. “Neighbors actually bought my leaves.

“My neighbors were nice.”

The youngest entrepreneur in Winnetka history also set up shop—picture a chair and a card table, supporting her “garage art”—in front of Michelle’s Bakery, which is no longer standing, no longer generating aromas to pull passersby inside. Katie, Inc. stuff for sale at that location included golf balls, golf tees, and bicycle baskets she had painted.

“I took golf balls from golf bags in our garage and usually painted them pink,” Brickman says. “Anything, really, in our garage that could be painted, I’d paint and try to sell.”

Bold aims. By now it must be crystal clear that Katie and fearlessness have been inseparable partners since her Gerber days. “Bold” also happens to be the word that best describes Brickman’s artwork (katiebrickmanart.com) today. Bright, saturated colors elate her and set a positive tone, and she has a deep love for simple, clean lines. She paints primarily with acrylic on a whitewashed wood board.

“A friend of mine in Michigan once told me, ‘Everything is an experiment,’” says Brickman, the mother of 18-year-old Louise, a Pepperdine University freshman and former Lake Forest High School tennis player, and 16-year-old son Powell, a multi-sport athlete at LFHS. “And if everything is an experiment, what’s there to fear? If you fail, start over.

“When I started selling my art (as an adult, nearly two years ago), I wanted to show my kids that anybody can do anything. I’m putting myself out there. I want Louise and Powell to have the courage to do that as well, no matter what they decide to pursue in their lives.”

Brickman was born in Shaker Heights, Ohio. The youngest of four children, Katie moved with her family to Winnetka before the Powells packed up again and moved to Chicago when she was 14. Katie attended The Latin School of Chicago as a freshman.

She spent her sophomore, junior, and senior years at Cranbrook Kingswood, in Bloomfield Hills, Michigan, a school designed by the late Finnish American architect Eliel Saarinen. He was known for his art nouveau buildings that sprouted in the early 20th century.

Saarinen’s creations—along with painting and drawing and weaving and ceramics classes at Cranbrook Kingswood—opened Katie’s eyes to the wonders of design and art.

She hasn’t blinked since.

“The gates at the school, the light fixtures, and even the rugs and dorm furniture… all of it amazed me,” Brickman recalls. “I started appreciating art like never before. I was on a campus, but it felt like I had entered some mystical world. Magic was everywhere. The sculptures? To me they were fairytale sculptures.

“I didn’t just take art courses at Cranbrook Kingswood; I was surrounded by art.”

One of her painting teachers instructed the class to emulate a painter. Brickman chose Miro, a Catalan painter, sculptor, and ceramicist born in Barcelona. In Paris he developed his unique style: organic forms and flattened picture planes drawn with a sharp line (Guggenheimcollection.org; 25 December 1983).

Brickman majored in art history at Hollins University in Roanoke, Virginia, and lived briefly in Charleston, South Carolina, after college. She met her future husband, Joe, in New York, where she landed a position with the designer brand Kate Spade New York, co-founded by the late Kate Spade and her husband, Andy Spade.

Brickman wore too many hats to count for the company during an on-and-off tenure that lasted about seven years. She wrote about the early years of her life in Ohio and Winnetka, and the Spades didn’t just love it.

Mr. and Mrs. Spade used it in their enterprise’s ad campaigns.

“At the time I met them, Kate and Andy were super young entrepreneurs,” Brickman says. “I loved that they were doing their own thing, going with their instincts. They were confident. They put products out there. Their way of thinking, for each product, was, ‘Let’s go for it and see if it appeals.’ ”

The Brickman family has lived in Lake Forest since 2007. Katie has worked with endurance athletes at Vision Quest Coaching, a physical fitness program in Highland Park, and she plans to run the Chicago Marathon on October 9. That woman who’s scrambling around a paddle court at Onwentsia Club or at Lake Bluff Park District and using defense and a steady backhand to keep points alive?

Nothing made Brickman feel more alive, as an artist, than when she heard that the renowned designer Alessandra Branca—a friend and former employer—wanted to purchase 13 of her paintings.

“That was validation of my artwork,” Brickman says. “It meant the world to me that the pieces appealed to her. It also boosted my confidence.”

But Brickman’s best moments to date have nothing to do with the creation of vibrant art.

And everything to do with motherhood.

“There’s nothing better than spending time with Louise and Powell,” she says. “Powell, I’m so proud of him. He started a job at a golf course, picking up range golf balls. He later asked for the opportunity to instruct. Guess what? He got that opportunity.

“Louise is chill, calm, confident. Maybe one day she’ll start a blog on restaurants in Los Angeles. Or maybe she’ll write restaurant reviews out there in California.

What excites me is knowing she’ll be able to do anything she puts her mind to, and then she’ll do it well.”

For more information about Katie Brickman and her art, visit katiebrickmanart.com.