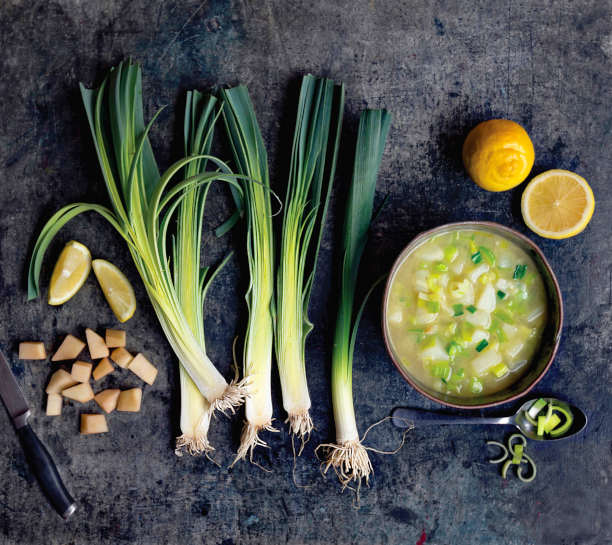 There is a delicious vegetable soup in this post. But first? Some grandfather tales. My Grandpa was a big believer in a vegetable diet, eating large quantities of carrots and beets, turnips and potatoes, green beans and cabbage, most of which he peeled and chopped while sitting on a little handmade wooden perch called his “stropping stool.” I made this soup thinking of him.

Grandpa was a powerfully built man, who helped build the train cars for Pullman and was an amateur boxer. When he learned there was prizefighting at White City, an amusement park that used to stand at 63rd Street and South Park Avenue on Chicago’s South Side, he headed into the ring. That went fine until some beer-drinking buddies dared him to show his strength by breaking a rope tied around his bicep. He broke the rope, but also busted his bicep.

Grandpa started his vegetable regimen shortly thereafter, on the advice of one Dr. Brown who believed a vegetarian diet would cure all ailments (and had most of the relatives muttering, “quack.”) But Grandpa lived a very long time, passing on his love for vegetables to all of us. I still have his stropping stool, where I perched earlier today to peel the potatoes for this very simple, delicious soup.

I adore leeks, preferring them over onions for their delicate flavor, buttery texture and beautiful color in a soup. If you like, you can add some cooked barley or couscous for extra texture and calories, but I think this soup—just vegetable broth, butter-sautéed leeks, potatoes and lemon—is perfect on its own.

• Salt and fresh-cracked pepper to taste

• In a small, heavy bottomed pot, heat 2 cups water to a simmer over medium heat. Simmer diced potatoes in water until tender. Remove from heat. Drain. Set potatoes aside.

• Add butter to pot over medium heat. Once butter is melted, add sliced leeks and sauté, stirring occasionally until tender. Add cooked potatoes and vegetable broth to pot; heat until broth is hot. Salt and pepper to taste. Serve hot in bowls with drizzle of fresh lemon.