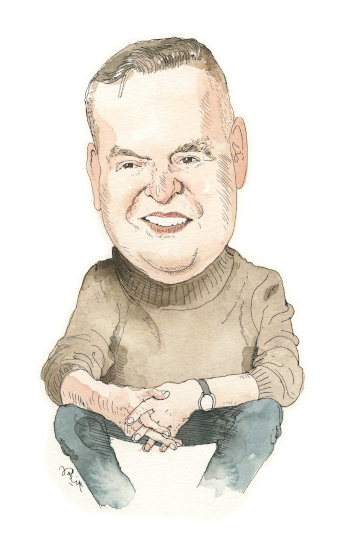 Wondering what spaghetti sauce had to do with luring Sophia Loren to attend the Chicago International Film Festival in 1990?

Or why the silent screen comedienne Colleen Moore Hargrave ordered the festival’s founder, then-22-year-old Michael Kutza, to wear glasses and tell everyone who mattered that he was 27 in 1964?

Or about Kutza’s interactions with Charlie Chaplin’s daughter Geraldine and her famed Chilean cinematographer husband, Patricio Castilla, while the trio spent 10 days together at the 2015 Havana Film Festival in Cuba?

Answers to all of the above, and much more, are in Kutza’s debut book, Starstruck: How I Magically Transformed Chicago into Hollywood for More Than 50 Years (BearManor Media, 2022). It’s informative, inspiring, funny, revealing, and edgy. Kutza ran the Chicago International Film Festival—North America’s longest-running competitive film festival—and served as its artistic director until stepping down in 2018.

A native of Chicago’s West Side and the son of physicians, Kutza, 82, remains CEO emeritus of Cinema/Chicago and the Chicago International Film Festival. This year’s festival—the 58th—presents 92 feature films and 56 shorts and runs from October 12-23, with screenings at several locations, including AMC River East 21 and the Music Box Theatre.

“All I ever wanted to do was bring the world of international cinema to my hometown,” Kutza, a Weber High School graduate, writes in the chapter “All The King’s Men” (each chapter is a movie title). “Who knew you had to spend half your time proving to people that there was value to them in doing the festival? (Actually, maybe everybody).”

“With the Chicago International Film Festival,” he adds, “we continually promoted coming to Chicago to make your next film, working closely with the various film offices and at the Cannes and Berlin festivals, hosting receptions heralding the city and the state. My purpose in starting the festival was, through film, to show my hometown and what they were missing to the world.

“It certainly succeeded in doing that.” Kutza, who moved to a River North highrise six months ago, remembers a time—in the 1980s, in particular—when making a movie in Chicago and its striking suburbs (take a bow, North Shore villages) was “a big deal.” Flicks like The Untouchables, Ferris Bueller’s Day Off, and The Dark Knight enthralled Kutza and showcased the Chicago area’s beauty and muscle.

What saddened him most about the 2002 Academy Award-winning film version of Chicago had nothing to do with its script or score.

“It was shot in Toronto,” Kutza notes.

Kutza was 8 when he produced his first film at his West Side home. His mother took care of the footage, having shot scenes using a 16-millimeter camera at conventions and on trips all over the world with other female doctors.

“Mom gave me about five days to make a movie out of what she handed me when she got home,” Kutza recalls. “She told me, ‘The lady doctors will be coming over Sunday.’”

And you thought chores involved only putting your toys away, taking the garbage out, and folding laundry.

Kutza later made movies with music and special effects when he wasn’t planting himself at the neighborhood movie theater and watching—wide-eyed and slack-jawed—horror films, science-fiction movies, and musicals.

Mom and Dad insisted Michael hit the books hard and become a doctor.

One problem: “It’s something I had zero interest in,” Kutza writes. “Z-E-R-O.”

The cinema-loving son did earn degrees in biology and psychology at Roosevelt University in Chicago, before completing his post-graduate studies at the Institute of Design at the Illinois Institute of Technology. He’d become an award-winning graphic designer, but nothing he’d do for a living would come close to the passion he had for developing his only “child”—the Chicago International Film Festival.

The late Chicago Sun-Times columnist Irv Kupcinet had heard about the West Side upstart with the audacious quest to establish an international film event in the city, so he treated him to lunch at Fritzel’s Restaurant. Kup then introduced Kutza to the aforementioned Hargrave, who had retired to Chicago after starring in silent films in the 1920s and 1930s.

Hargrave (1899-1988) invited Kutza to her place for lunch. They clicked, pronto. The idea of an international film festival in the “Windy City” delighted the woman who played the lead role in the 1918 silent film Little Orphant Annie and later helped popularize the bobbed haircut. Kutza would name her the festival’s honorary chair.

Kutza, accompanied by Hargrave each time, soon became a regular at the Arts Club, “where the powerful people would meet to discuss powerful things in a powerful way,” Kutza writes.

It was around that time when Hargrave told Kutza to add five years to his age “because nobody trusts someone who’s 22.”

The inaugural Chicago International Film Festival started on November 9, 1965, at the original Carnegie Theatre at Rush and Oak streets. It grew steadily from there, featuring director Martin Scorsese’s first film (I Call First, later renamed Who’s That Knocking at My Door) in 1967; presenting the world premiere of One Flew Over the Cuckoo’s Nest in 1975; and honoring Jodie Foster in 1996 and Clint Eastwood in 2002 and Steven Spielberg in 2006. Tom Cruise made a surprise appearance on Spielberg’s big night.

“Famous actors and directors are ordinary people who happen to be highly talented and respected people—that’s what I learned, probably more than anything else, while running the festival,” says Kutza, the recipient of an extraordinary recognition in 2015, when the President of the French Republic named Kutza a Knight of the Legion of Honour.

“I wrote the book because people kept telling me, ‘You must have plenty of stories to tell about the stars and the directors and what went on behind the scenes all those years’,” Kutza says of the two-year project.

About Sophia Loren and the spaghetti sauce …

“I went to Los Angeles and drove a few hours out to Hidden Valley,” he begins. “I met Sophia’s husband (Carlo Ponti) and told him about the festival and how we could honor Sophia. … We worked out the details and I had a fun idea, which Sophia loved. She always claimed that her success was due to spaghetti. Seriously.”

Kutza offered to serve Loren’s spaghetti sauce recipe on one of the dishes at the festival.

“Sophia gave me the recipe, and I had Joey Mondelli of Kelly Mondelli’s restaurant make it,” Kutza continues. “But first, she had to approve it. Joey made it and I flew out with a gallon packed in dry ice back to Hidden Valley. True story. All turned out fine.”

For more information about the 2022 Chicago International Film Festival, visit chicagofilmfestival.com. Michael Kutza’s book, Starstruck: How I Magically Transformed Chicago into Hollywood for More Than 50 Years, is available via all the usual online platforms, including amazon.com and Michael Kutza barnesandnoble.com.