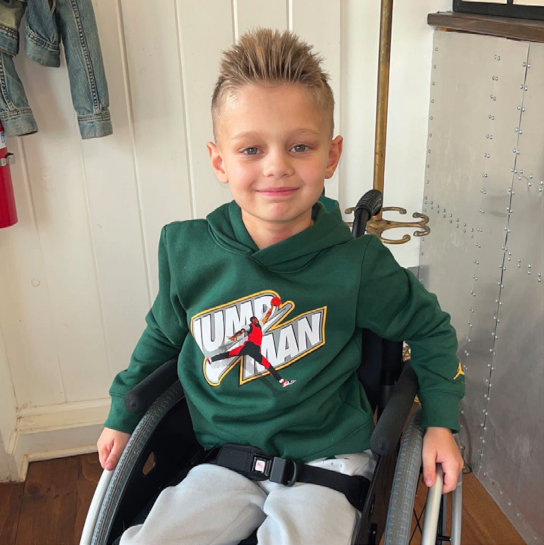 More than two months after being paralyzed during a mass shooting at the Highland Park Fourth of July parade, 8-year-old Cooper Roberts returned home to his family last week.

“We are at a total loss of words to express how filled with gratitude, love, and wholeness we now feel given that we are able to finally have Cooper back at home,” said the boy’s parents, Jason and Keely Roberts, in a statement released to The North Shore Weekend. “There was a time, not all that long ago, where we were desperately and feverishly praying just for Cooper to live. To be able to have Cooper home and our family all reunited together again is such an amazing blessing.”

Cooper’s journey home came after a life-saving surgery at Highland Park Hospital the day of the shooting, numerous additional surgeries, and stays at Comer Children’s Hospital and Shirley Ryan Ability Lab. He needed to be fully intubated and on a ventilator at times, enduring weeks of pain and suffering as he was separated from his parents; twin brother, Luke; four sisters; and a beloved French Bulldog puppy named George.

“You take for granted how wonderful it is to be able to have all your children together and how important they are to each other until it is taken away,” said Jason and Keely. “Having our children reunited as a sibling unit and knowing that they can be together whenever they need or want to, is so special to us and to Cooper. They have held each other up and through so much during what has been the most horrific time in their lives.”

Cooper is paralyzed from his waist down and will continue to undergo rehabilitation on his road to recovery. As part of his welcome home, the family is embracing new activities and sports they can share together.

“We know that Cooper continues to face a heartbreakingly cruel and unfair road ahead. The transition to having Cooper’s extensive medical needs being addressed at home vs. at the hospital or rehabilitation clinic is a gigantic learning curve for all of us. And now that he is home, Cooper has to deal on a daily basis with the sadness and grief of recognizing all the things he’s lost—all that he used to be able to do at his house, in his community, that he cannot do anymore,” the family said. “Yet, we choose to focus on what we do have. Cooper is alive and home and our sweet and lovely athletic little boy has made up his mind that he is going to figure out new ways to play sports.”

Over the last week, they say he has embraced wheelchair tennis, and has already been to the court with his brother several times. To help during this challenging transition, fundraising efforts go on for the Roberts family.

In addition to the Go Fund Me page (gofundme.com/f/kxwjn-the-roberts-family-fundraiser), a family-friendly fundraiser is being held on Sunday, October 16, at Whiskey River Bar & Grill, 1850 Waukegan Road, in Glenview. The event will run from 1 p.m. to 6 p.m. and include a magic show, live DJ, face-painters, a tie dye station, and other activities with 100 percent of proceeds going to the Roberts family for Cooper’s ongoing medical needs and other expenses like home adaptations, medical equipment, and assistive devices.

“That little boy just tugs at our heartstrings,” says bar owner Kathy Karowsky, who arranged the fundraiser even before Cooper was sent home.

As the family said in their statement, Cooper’s story continues to inspire the community and the nation at large.

“He is brave and kind … and it is because of the love and prayers you have all sent and continue to send to him that we believe he continues on a path of healing,” they said. “Please continue to pray for our sweet little boy … we know he will show the entire world that love really does win in the end.”

Admission to the October 16 fundraiser is $20 for those 10 and older and includes food. Admission is free for children 9 and under. Alcohol is available for purchase with a percentage going to the Roberts family as well. For more information, call Whiskey River at 847-486-1007.