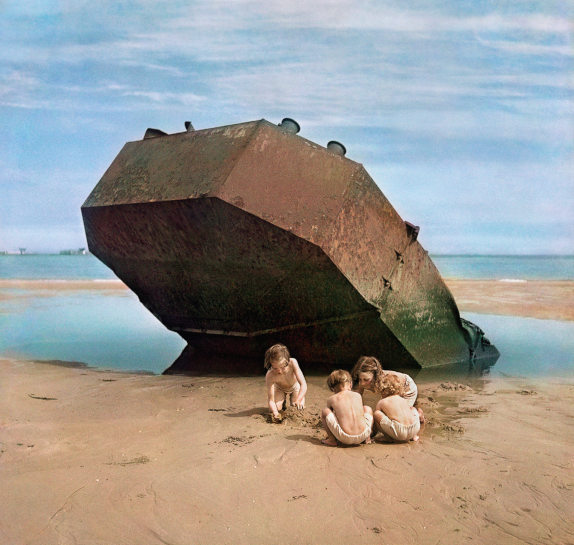 David “Chim” Seymour was one of the most accomplished photojournalists of the 20th Century, which may come as a surprise to many who haven’t heard of him. Chim—named Dawid Szynim at birth—was born in 1911 into a family of Hebrew and Yiddish Publishers in Warsaw and got his start as a photographer taking pictures for magazines in Paris.

He left Paris in 1936 to cover the Spanish Civil War.

Upon his return, his prospects as a Jew and a foreigner were severely diminished due to the increasing influence of the Nazi regime, so he escaped to New York in 1939. In 1942 he joined the Army, using his photography experience and ability to speak six languages to qualify as photo interpreter during World War II.

It is Chim’s experience after the war, documenting the aftermath and the rebuilding of democracy in Europe, that is the focus of Chim: Between Devastation and Resurrection, a new exhibit that recently opened at the Illinois Holocaust Museum & Education Center.

“I think for our audiences, it will be a really interesting exhibition. We’ve never had an exhibition that specifically looks at this time period, at the post-war period,” says Arielle Weininger, Chief Curator of Collections & Exhibitions at the museum. “It’s about the very complex history of how to rebuild Europe, how to have new elections, how to rebuild democracies after many, many years of fascism.”

The exhibit was initially intended to be a more comprehensive display of Chim’s work that was first shown at an exhibit in 2013 at the International Center of Photography in New York titled, We Went Back: Photographs from Europe 1933 to 1956 by Chim. But the COVID-19 pandemic erased those original plans and forced Wieninger and her colleagues to pivot.

Chim: Between Devastation and Resurrection includes four of the groupings of Chim’s works that were included in the exhibition in New York.

“It covers work that Chim did post-World War II, including the rebuilding of Europe, postwar elections in Germany and Italy, and how these countries were being rebuilt in part with assistance from the Marshall Plan,” Weininger says. “Chim was then hired by UNESCO to do a major story on the children of Europe, the 12 million orphans who were left after the war. He traveled to five different countries to cover that story, which became what Chim is most wellknown for.” 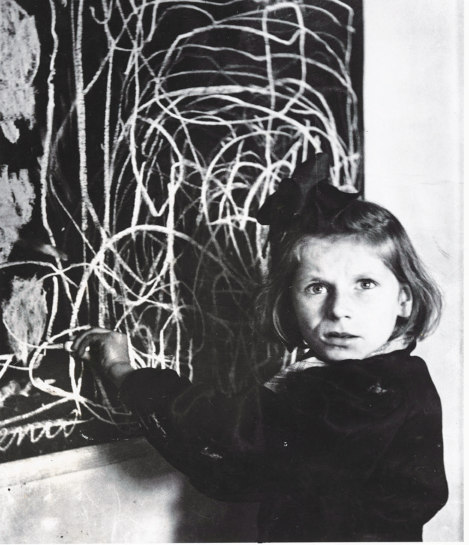 Tereska standing by her drawing of “home” in a home for emotionally
disturbed children, Warsaw, Poland, 1948

The exhibit also includes photographs from Chim’s frequent visits after the war to Israel to document the development of the new Jewish state. While he wasn’t an observant Jew, he was deeply tied culturally to Israel due to his childhood and the death of his family during the Holocaust.

“With the birth of the new state of Israel, Chim was very interested in connecting to the state of Israel. From 1951 through the rest of his life, he made annual trips to Israel to document the building of the state,” says Weininger. “Going back to his roots as a war photographer, he went down to the Suez crisis and unfortunately two days after the cease fire he was in a Jeep that was targeted, and he and a reporter he was with died in 1956.”

The UNESCO assignment covering the lives of children in Europe serves as the heartbeat of the new exhibit. The photographs are both haunting and life-affirming and reflect the efforts of the global Jewish community to help children heal from the effects of the war.

“Chim’s most famous photograph is the portrait of Tereska. It’s of a young girl with a very disturbed look on her face and she has this blackboard behind her with scribbles on it,” Weininger says. “She was at a school/hospital for disturbed children and was asked to draw a picture of home, and that’s what Tereska draws. Her home had in fact been bombed during the German bombing of Warsaw and she was hit with shrapnel which damaged her brain. You can see the disturbance in her.” 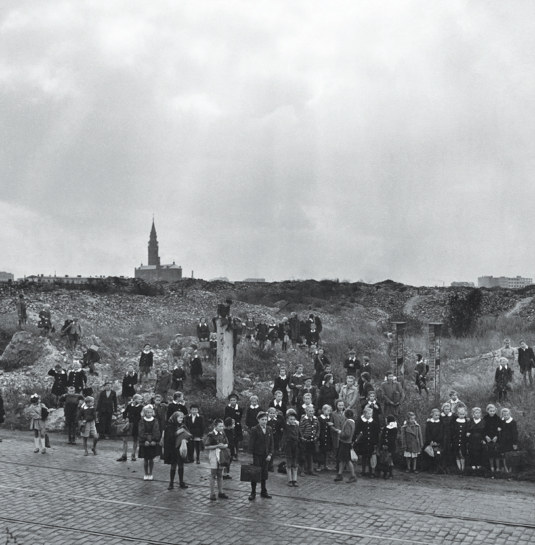 School children waiting for a bus in the ruins of the destroyed ghetto, Warsaw, Poland, 1948

Another photograph was taken in a tuberculosis sanitarium outside of Warsaw, a beautiful portrait of girl who is laying on a cot.

“It’s difficult to imagine what these children might’ve gone through. Looking at the ages of them, none of them would’ve known life without war,” says Weininger. “It’s incredible to see them being taken care of.”

The 51 photographs from Chim’s post-war work included in the exhibit are not archived photos but larger prints made from digital copies, giving the viewer an almost “being there” sense of connection with the photograph’s subjects.

The exhibit also includes a video display of 100 color photographs that are part of a collection of 800 photographs discovered in 2012 in a family home. A video that was shot in 1947 by Moses Leavitt, an executive at the time with the American Jewish Joint Distribution Committee (JDC), is also part of the exhibit.

“One AV station will be running these 100 additional photographs, and we’ve added to the exhibition some incredible footage, color film that was shot by the Executive Vice Chairman of JDC,” Weininger says. “He went on a tour of organizations the JDC was funding and it includes some of the exact same sites that Chim covered and some of Chim’s photographs are in the footage.”

The silent film is paired with children singing songs at a Jewish-supported hospital outside of Paris. The songs were recorded by David Boder, who at the time was a professor of psychology at Illinois Institute of Technology in Chicago.

“Boder, who was European himself, went to Europe and recorded the first ever testimonies of Holocaust survivors. He would also ask people to sing, so these are some of the earliest known recordings of child survivors of the Holocaust and they’re singing songs that have been taught to them in this orphanage,” says Weininger. “The songs were taught in Hebrew as preparation for moving the children to the new state of Israel.

“When you see the images of these children and you hear their voices it pairs very well with Chim’s work but also brings the visitor back in time to think about the effects of the war on children and what survival must have meant.”

“Chim: Between Destruction and Resurrection,” will run from now through February 4 at the Illinois Holocaust Museum & Education Center in Skokie. For more information and to reserve tickets, visit ilholocaustmuseum.org