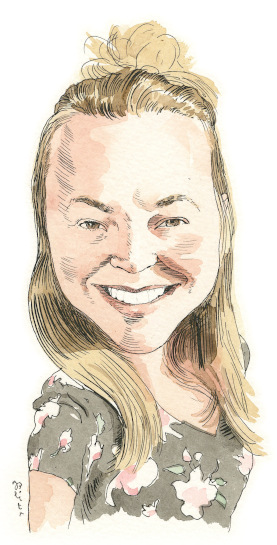 Lindsay Thomas, nee Loekle, earned her wings in high school without spending a minute in flight school. Maybe you’re thinking right about now, I’ll fly to any destination in the world but only if Thomas is sitting in 18A, not on the left side of the cockpit.

Thomas (nicknamed “Little Loekle”, as one of Mike’s two younger sisters) was a flyer on Homewood-Flossmoor High School’s cheerleading squad nearly 20 years ago. During a routine that’s anything but routine, a flyer gets launched due north by one or two teenagers, prays she doesn’t conk her head on a gym rafter, and then prays doubly—on the way down—that a teenager catches her cleanly.

Drops in football are forgiven way more than they are in cheerleading.

“I dabbled in a lot of sports,” says the 37-year-old Thomas, now soaring toward cirrus-cloud heights as Wilmette Park District’s ever-energetic and ever-ever-convivial manager of district operations.

Nobody deserves to sport a varsity letter more than the fearless cheer flyer does.

‘W’, as in Wilmette, born on September 19, 1872. The village’s yearlong Sesquicentennial Celebration culminates at THE Wilmette Block Party on Saturday, September 10. The 11 a.m.-11 p.m. fest for all ages will be held at the Village Center (1101 Lake Avenue) and peripheral spaces, and feature a parade of dignitaries led by the Loyola Academy Marching Band, a Kids’ Zone, food and beverages, and performances by four bands, including Tributosaurus, which will morph into the Rolling Stones right before your eyes and ears (especially your ears).

The other bands scheduled to entertain are Hoopla, Antler Chandelier, and One Night Band.

Thomas served as the tireless Wilmette Park District liaison while organizing the prep work for the multifaceted gathering. Chris Canning, one of four Sesquicentennial Celebration Committee co-chairs (with John Jacoby, Nancy Canafax, and Vern Squires) dubs Thomas “the backbone” of THE Wilmette Block Party and two other recent 150th Anniversary happenings: the Ouilmette Foundation’s Beach Bash (August 20) and the Evanston Symphony Orchestra concert at the Wallace Bowl (August 24), an amphitheater at Gillson Park.

The latter drew some 2,000 concertgoers, including rapt youngsters Ryan and Nick Thomas.

“Lindsay’s many contributions,” Canning adds, “have made Wilmette’s Sesquicentennial a true celebration of our community.”

Homewood native Thomas enrolled at Eastern Illinois University in Charleston and thought she’d major in family and consumer sciences. She spent a summer and more than half of her sophomore year (May through November) in Disney World’s “The College Program” in Orlando, Florida, working as a Chef Mickey’s hostess at Disney’s Contemporary Resort.

“The ‘people’ person in me wanted to pursue a career in hospitality management,” Thomas says. “But that changed after I had a conversion with one of my (Sigma Kappa) sorority sisters when I returned to campus. She encouraged me to try leisure studies, because she thought it would be a better fit. I looked into it.

“My junior year I declared my major, recreation administration.”

A tennis player named Chris was in many of her rec admin classes. She took notes for the New Trier High School graduate when an arm injury took away his ability to jot.

They reconnected via Facebook after graduation and began dating when Lindsay was an office manager at TJM Brokerage in Chicago. They became Mr. and Mrs. Thomas and, before settling in Glenview more than three years ago, lived in Northbrook, Mount Prospect, and Arlington Heights.

Chris Thomas — who, as a senior doubles player with classmate Tony Soruco, captured a sectional championship and helped New Trier’s Trevians place second at the state tennis meet in 2004 — is a tennis pro at College Park Athletic Club in Bannockburn and the head boys tennis coach/assistant girls tennis coach at Glenbrook South High School in Glenview.

Lindsay Thomas was a staff assistant/recreation specialist at the Northern Suburban Special Recreation Association (NSSRA) in Northbrook from 2010-2014, before landing the position of recreation supervisor at Wilmette Park District.

She’s held her current post at the park district since 2019.

“I love planning events,” says Thomas, who points to her late father, David (an IT technician/fervent golfer/serial home-improvement-project toiler), as the figure who’d instilled the nose-to-the-grindstone work ethic in her at young age. “It’s been a passion of mine for quite some time. I get to organize events that bring people together, that make people smile for hours. People who’ll attend this weekend’s Wilmette Block Party, an event that has something for everyone, will be a part of something historical. Who wouldn’t want to be a part of something like that?

“If you live in Wilmette or have any ties to the village,” she adds, “you’re not going to want to miss the celebration.”

Thomas could spend at least an hour discussing Wilmette’s unique attributes. It’s her work hometown, after all. Plus it’s where her future college classmate/husband grew up as a son of Gary and Sandy Thomas and started hitting all those crosscourt winners and effective serves.

“It’s amazing to me, the number of parks and open spaces in Wilmette,” she says. “I’m telling you, the parks per square mile in the village … there’s practically a park in every Wilmette neighborhood.

“And you can’t beat Gillson Park, a wonderful park, a park that has everything.”

Also second to none: Lindsay Thomas.