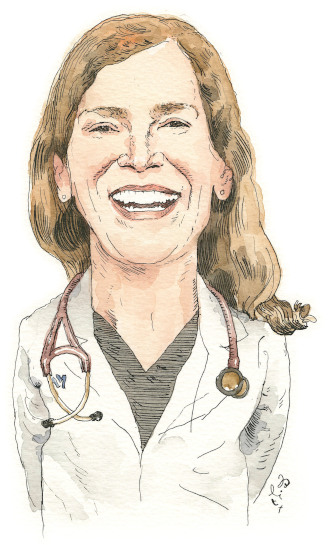 A couple of months before she’d become an official University of Wisconsin Badger in Madison, Ann Vertovec traveled to Battle Ground, Indiana, to study wolves and serve as a volunteer researcher at Wolf Park.

A piece about the Tippecanoe County park in the Chicago Tribune drew her to the Hoosier State that summer. Vertovec eventually devoured Never Cry Wolf, a book by Farley Mowat about the myths and magic of wild wolves.

“Wolves are very social and little understood,” says the 62-year-od Vertovec, who double majored in zoology and psychology but chose to pursue a career in medicine as an emergency care physician. “Wolves interested me then; they still do.

“They’re smart and complex, incredibly complex,” the longtime Lake Bluff resident adds, “and they work as a group.”

In other words, they’re into collaboration.

And so is Dr. Ann Marie Vertovec, who, after 30 years of 8:30 p.m.-6 a.m. shifts at Northwestern Medicine Lake Forest Hospital, earned board certified status in Integrative Health. Only about one thousand people in the United States can claim that.

“It’s a discipline that centers on the physician-patient relationship,” Vertovec says. “It also empowers the self-healing mechanisms within the patient by emphasizing lifestyle and behavior changes.”

According to the Academic Consortium for Integrative Medicine and Health, “Integrative Health focuses on the whole person, is informed by evidence, and makes use of all appropriate therapeutic and lifestyle approaches, healthcare professionals, and disciplines to achieve optimal health and healing.”

Doctors in Emergency Medicine react to illnesses and injuries.

Integrative Health specialists are proactive and all about preventive health care.

“In the field of Emergency Medicine,” she says, “it’s the physician and the patient, one-on-one, on the day you see them. I want to reach more people and help more people heal.

“I’ll be able to do that through Integrative Health.”

The youngest of Edward and Betty Vertovec’s four children, Ann grew up in the western suburb Elmhurst and graduated No. 1 from her class of 860 at York High School, home of the Dukes. The gregarious Edward—a lawyer, a man with a heart bigger than a medicine ball, and a Thousand Points of Light Volunteer Award honoree—died in 2015 at the age of 91. Sharper-than-a-tack Betty, 98, lives in Elmhurst and could humble you in bridge, Gin Rummy, and Hearts, among other games.

Ann and Dave got married in 1992 in Gibraltar, the British colony in Spanish territory known for a Rock that doesn’t adorn a ring finger.

“Emergency Medicine was a newish field back then,” says Dr. Vertovec, who, at the beginning of her career, worked shifts at six hospitals, including Lake Forest’s. “One of the many rewards of working in emergency care is helping patients; I find that totally fulfilling. You get to interact with patients, solve their problems, get them to the right people. People are interesting to me.

“What I learned early on was, don’t judge people, because it doesn’t do any good. I’m there to dig and find out what’s causing the problem that brought them to our hospital. After some 30 years of doing this, you get accustomed to reading people, to knowing whether it’s okay to bring up a sensitive subject like diet.”

Because of her odd, vampire-ish work hours, Vertovec hired a nanny/ house manager, the beloved and immensely popular Rosie (everyone in the neighborhood and their first and second cousins know the Haitian immigrant). But Ann prepared a to-die-for dinner for her boys before each shift and made sure they ate a healthy, tummy-stretching breakfast after each shift.

School time for the sons meant bedtime for Mommy. Rosie, of Des Plaines, retired after a 26-year run with Ann and Dave’s family in December. Wilfred calls his mom “a real-life superhero.”

“Motherhood,” Vertovec says, “is my greatest accomplishment. Getting to know my sons as adults excites me. It’ll never get old, enjoying them as the wonderful people they’ve become.

“I cherish every minute with them.” Among Vertovec’s fond escapes is time spent walking in, and breathing in, nature, especially any ground in Lake Bluff Open Lands. Her spouse, meanwhile, prefers to do most of his touring across fairways and putting greens.

The Growing Native Green Community, a Lake Bluff-based garden club, launched last year. Dr. Vertovec is a member. The plush area near the tennis courts at Artesian Park makes people stop and gawk, all because of the young club’s handiwork.

“There are plenty of medical benefits of nature,” Vertovec says. “You can tell a lot about a community’s health by its trees. Planetary health, keeping our planet safe, is important to me. One of my goals is to keep nature around.

“Getting back to Interactive Health and its objectives, being around nature relaxes you— it can be meditative, and that falls under a healthy lifestyle component, one that can be introduced by a practitioner to a patient,” she adds. “There’s exercise, too, along with food. Food, the right kind, is key. Fast food is not your friend.

“I love salads. I eat them all the time.”

Wolfs them down, maybe.