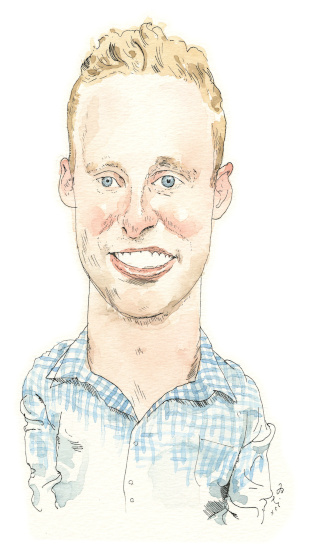 At the age of 12, Will Nowesnick fell in love with lacrosse when his heart resembled a slew of disconnected jigsaw puzzle pieces.

His father, Greg, a whip-smart architect with a resolute work ethic, had died less than a year earlier, reducing the Nowesnick household in Lake Forest to Will, Will’s mother, Denise Andresen, and Will’s sister, Grace, then 9 years old.

“I’m still processing it,” Will, now 26 and a resident of Chicago, says of his father’s death in 2007. “He was an extremely hard worker. He owned a showroom in Winnetka, and I’d go on work road trips with him. One was to Indiana, where the Amish had built cabinets for him.

“At home,” the son adds, “I saw how hard he worked, how late he worked, how much he cared about his profession. I’ve tried to emulate his work ethic and passion ever since.”

Lacrosse became Will’s architecture. And haven. And comfort zone. A first-time ice skater at the age of 4 atop the sheet of indoor ice at Lake Forest College, he’d become a hockey enthusiast. Later, when he was a seventh-grader, lacrosse—the sport dubbed “hockey in the air”—entered his life and soothed his aching ticker in the first minute, give or take a few seconds. Nobody would have been surprised had Nowesnick replaced the pencil behind one of his ears with a lacrosse stick on the way to practice.

Local lacrosse coach Tom Walters stuck Nowesnick under his wing and the youngster took off in no time, eventually making an elite Lake Forest Lacrosse Association team in the eighth grade.

“Coach Walters, a fantastic coach, got me hooked on lacrosse,” Nowesnick recalls. “More than any other sport, lacrosse helped me cope during a tough time in my life. My father excelled in his field of work; I tried to excel in lacrosse. I needed an outlet that I loved, because I was a high-energy kid who always wanted to be busy.”

The burgeoning defenseman enrolled at lacrosse powerhouse Loyola Academy in Wilmette and emerged as a two-time state champion for the Ramblers. Nowesnick suffered a broken left thumb early in his sophomore season, scaring off several Division-I college recruiters.

The 6-foot-4 Nowesnick and his Boeing-747 wingspan, along with his speed and savvy, helped Salisbury capture two of the program’s 12 NCAA D-III national titles under SU men’s lacrosse coach Jim Berkman.

“Coach Berkman,” Nowesnick says, “was the best father figure to me. He’s an avid cyclist, a man who gets up at 6 a.m., every day, to exercise. Every lacrosse season to him is a reloading one. He’s an every-base-covered coach. But Coach Berkman doesn’t just care about lacrosse and his program; he also cares deeply about his players as people and as students.”

Nowesnick failed to shake the lacrosse bug after earning a degree in economics. He joined True Lacrosse, an organization committed to the education and development of young lacrosse players in Illinois and served as a regional director. Professional lacrosse teams Atlanta Blaze and Philadelphia Barrage signed Nowesnick to one-year contracts in 2019 and 2020, respectively.

While with the Barrage, he bottled up Chesapeake Bayhawks star attackman and former SUNY Albany standout Lyle Thompson—the most prolific goal scorer in NCAA Division I history and the top overall pick in the 2015 Major League Lacrosse Collegiate Draft—and chose to walk away from professional lacrosse shortly thereafter.

The comparable, in baseball: smacking a 100-mph-pitch for a walk-off homer off Nolan Ryan in his prime and hanging up the cleats on the same day.

Nowesnick’s next stop on his lacrosse journey was in good ol’ Lake Forest, as a Lake Forest High School varsity boy’s lacrosse assistant coach. The Scouts played none other than the Loyola Academy Ramblers in each of the last two state championship games.

“I loved playing for Loyola Academy and its coaches (Rob Snyder, Brian Rynes, and Eric Genova), but it was fantastic to come back to the Lake Forest community, coach the sport I love, and be a part of a program that grew and reached elite status,” Nowesnick says.

Nowesnick stepped down from coaching after the 2022 prep season and welled up— “I somehow avoided full-on crying,” he says—at the Scouts’ team banquet. He’ll now focus all of his attention on his career at Boston Scientific, a biomedical/biotechnology engineering firm and multinational manufacturer of medical devices used in interventional medical specialties.

“I will always be grateful for the many people who came into my life, and mentored me, through lacrosse, and I’m not just talking about all of my wonderful coaches,” says Nowesnick, a perennial contender for the unofficial title of Most Polite Human in America. “I met Dr. Josh Tepper (of Deerfield), a surgeon, because I coached his sons, Mason and Evan. Mark Lawrence is in the food business and the father of Jack (of Glenview), another boy that I coached.

“Mark,” he adds, “is wise, a great guy, a good friend. I’ve received a ton of great advice from him.”

Nowesnick moved from Lake Forest to Chicago in early July. But the bulk of his heart, if not all of it, remains entrenched in Lake Forest. It’s where he huddled with his mother and little sister after an agonizing loss that had nothing to do with relinquishing a late-game lead or failing to defend too many man-up situations.

Their family, sadly, was a man down.

“The love my mom has for her family is her No. 1 quality,” Nowesnick says, “And she’s a great leader, able to see ahead and still be in the present. My motto is to live with love and continue to learn every day. I still learn from my mom and my sister (Grace, now 24 years old). They’re both interesting and inspiring.