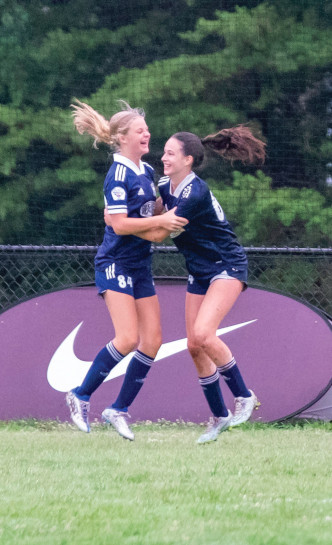 Academy U14 soccer teammates Meghan Rupprecht and Kaya Schneider celebrate the second goal in their team’s 3-0 victory in the National Presidents Cup Championship game in North Carolina on July
10.

A North Shore youth team featuring a bevy of multisport athletes achieved a singular feat in the sport of feet—soccer—in North Carolina this summer.

“It’s an extremely fit group, with dedicated athletes who play at a high level in several sports,” FC-1 Academy coach Kyle Kurz says. “Our players are strong, physically and mentally. You could see them break an opponent’s spirit with their athleticism and determination.”

Adds FC-1 Academy Executive Directory Tony Youhanna: “We don’t threaten our club’s players by saying, ‘You must play soccer only.’ We want them to be happy playing soccer, without ever having to give up another sport that they love.”

Goalkeeper Reese Crosby, of Highland Park, who’s also a standout in basketball, earned the shutout in the title match. FC-1 Academy (25-5-3) led 1-0 early—super early—when Northbrook’s Kaya Schneider blasted a goal from about 35 yards out only 40 seconds after kickoff.

“It shocked them, how quickly we scored,” defender and rising Glenbrook North High School freshman Emily Petersen recalls. “And we never let up from there. Those on our team, who are two-, three-sport athletes, were valuable because the skills they had developed in their other sport came into play in the championship game.

“It was a thrill to end our season like we did.” North Union United had defeated FC-1 Academy 2-0 in Presidents Cup pool play on July 7. Three days later, the club from Pennsylvania faced a 2-0, first-half deficit when it absorbed an own goal following a corner kick by FC-1 midfielder and Glenview native Meghan Rupprecht. 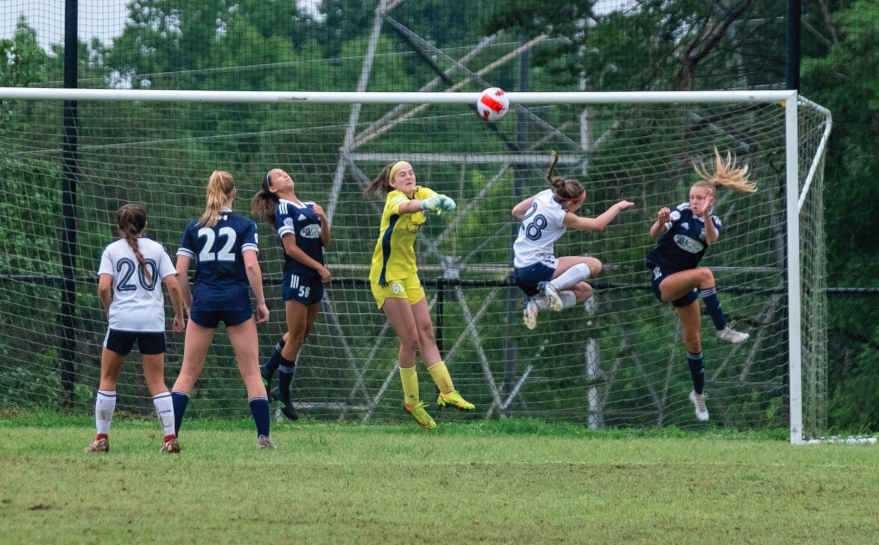 Academy U14 soccer goalkeeper Reese Crosby punches a shot a way in the National Presidents Cup Championship game in North Carolina on July 10.

A 25-yard free kick off the foot of Highland Park’s Nadia Barbieri in the second half capped the scoring.

“Our coach had prepared us well for the final and kept our hopes high after the pool-play loss,” says forward and Northbrook denizen Caitlyn Panek. “It was clear how super ready we were.”

They weren’t strangers to early setbacks. At a regional in St. Louis in June, Kurz’s crew topped a club in the final, another win that avenged a pool-play loss.

“Such a resilient group of girls,” says Kurz, adding 16 of FC-1’s 18 players will suit up for high school teams next spring. “They did a good job of understanding what we needed to do to advance after a bit of adversity. They were able to adapt to different formations—our opponents’ and ours.”

“They played unselfish soccer, gave everything they had, and had fun along the way,” he continues. “It was a month (of postseason soccer) that they’ll never forget.”

“Our parents did a lot of for us, but I have to single out Dannit,” Kurz says. “She led the charge, made my life easier as a coach. She was organized and handled all kinds of administrative matters for us.”