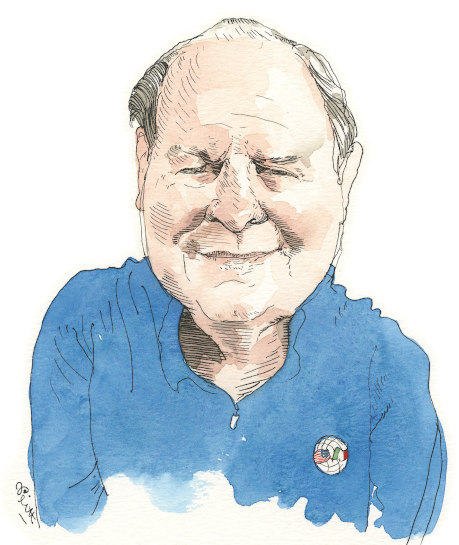 Remember pay phones? Bruce “Buzzy” Bertucci, 74, certainly does, and one of his favorite Highwood stories features the one that stood across the street from the restaurant Sandy’s, a man named Wild Bill, and former President Lyndon Baines Johnson.

He also threatened to harm the president if Johnson refused to do so.

“Someone at the White House asked Wild Bill to stay on the line,” Bertucci continues. “And he did. Then he got arrested, right in the middle of downtown Highwood.”

Bertucci—born and raised in Highland Park, where he still lives with his wife of 25 years, Lynne—will continue his stories in Highwood on each of the remaining Wednesday evenings in August. That’s when the second Highwood historian (his late father, Bruno, was the first) serves as the tour guide for the Historical Highwood Cocktails Tour.

“We stop by bars, restaurants, and other buildings in Highwood,” says Bertucci, who entered the bar business in 1976, as co-owner of the Hideout in Highwood, and left the industry in 2014, when he closed Bertucci’s (formerly Rainbows) in Highwood after a 24-year run. “I tell stories about the businesses and the history of Highwood, as well as the city’s characters. This city had, and still has, plenty of colorful characters.

“Teddy Roosevelt visited Highwood before and after his presidency,” adds the former Highland Park taxi dispatcher and ex-manager of Carousel Linens in Highwood. “He called it ‘the toughest town in America.’ But it’s the most real town, with people who are real—that’s what I love most about Highwood.”

Decades ago, more than a few Highwood bars opened at 6 a.m., Bertucci notes. Fights in bars? They reached the galore level in the 1950s and 1960s. But the establishments also doubled as packed venues for musical performances by the Ramones, the Platters, Koko Taylor, and other headliners.

It costs $20 to take a tour; each journey in the city dubbed “Whiskey Junction” starts at 7 p.m., from the Celebrate Highwood booth at the Wednesday Evening Gourmet Market, and includes four stops. Bertucci conducted the first tour on June 15, with eight people in tow.

The July 27 and August 3 tours sold out (limit: 15 people per date). Celebrate Highwood added a Wednesday (August 31) to its original tour schedule. Eric Falberg, co-owner of 28 Mile Vodka & Distillery in Highwood, came up with the cocktail tour idea. And he could not have picked a better tour guide than Bertucci, who’s part historian, part comedian, and blessed with a better memory than a horde of elephants.

“I love trivia, especially sports trivia,” says Bertucci, a movie buff (he’s seen Casablanca at least 40 times) and avid Chicago Cubs fan who worked security at 52 Wrigley Field games in 2018. “I remember everything, just like my dad did, though I wasn’t so good at remembering things in algebra and science classes. Dad owned Sun Valley Dairy, and he knew everybody’s address.

Ask him about the turtle races he announced for nine years, beginning in 1982, at a Highwood bar and the hilarious response to the order—“You can’t race turtles in here”— uttered by a health inspector. Or better yet: take a Historical Highwood Cocktail Tour this month and listen to Bertucci, extraordinary storyteller, recount the vivid details of the slow sprints while walking backward.

“I got home from a tour one Wednesday, reached into one of my pockets, and pulled out a $100 bill,” Bertucci recalls. “It was a tip. I also pulled out a $50 bill, same night.

“Spent all that money on golf balls,” he adds. The son of Bruno and the late Lena Bertucci (nee Mazzetti), Bruce was a 4-foot-9 Highwood Little Guys point guard who played before a crowd of 15,000 in a youth basketball game held at an outdoor court in Puerto Rico. The Highland Park High School graduate attended Miami Dade College in Florida for two years.

Bertucci earned his Ph.D. in All Things Highwood at some point in the 1970s, maybe earlier. Continuing education in the field continues… daily. And the man is a huge fan of Celebrate Highwood and its mission to foster a great sense of community and spirit by producing ongoing events and festivals that cater to the wants and needs of the citizens, businesses, and visitors.

Originally a collaboration between the City of Highwood and the Highwood Chamber of Commerce, Celebrate Highwood established itself as a separate entity and secured nonprofit status in 2016.

“Celebrate Highwood turned this town around,” Bertucci insists. “The organization has unified Highwood and made its residents proud of their hometown. Highwood Mayor Chuck Pecaro got behind it from the start and fully supports what it sets out to do each year.

“Highwood is fortunate to have an organization like that,” he adds. “I’m fortunate that I got the opportunity to serve in the bar and restaurant business in Highwood for nearly 40 years. I met a tremendous amount of good people.”

For more information about Historical Highwood Cocktail Tours and to sign up for the opportunity to learn about the hidden secrets of Highwood from Bruce “Buzzy” Bertucci, visit celebratehighwood.org.