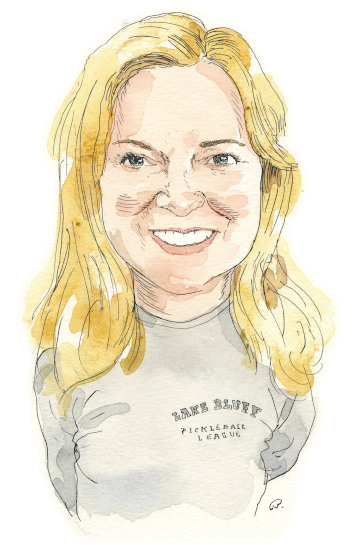 Pickleball continues to sweep the nation, and perhaps no one enjoys hanging on to one of the “bristles” more than Kauri McKendry.

“It’s incredible, the number of people signing up to take pickleball lessons here and everywhere else in the country,” an animated McKendry says of the sport that’s a combination of tennis, Ping-Pong, and badminton and features a ball that could easily pass for a Wiffle ball’s first cousin. “My goal last year was to teach pickleball to 100 people by the end of the summer. I reached that goal.

“I love people, and you wouldn’t believe the number of friends I’ve met through pickleball,” adds the Lake Bluff Park District and Waukegan-based Glen Flora Country Club racket sports instructor. “I’m in the business of bringing people together through sports. One of the beauties of pickleball is pairing a youngster and a senior citizen on the same court and watching them have an absolute blast together.”

It’s a late June morning, inside the Lake Bluff Park District clubhouse, about 30 minutes before McKendry welcomes more than 20 pickleball buffs for a 90-minute outdoor session in 80-degree temperatures. Hot. Almost as hot as pickleball. McKendry, 55, sits at a table with a visitor, discussing (what else?) the joys and simplicity of pickleball when a woman shouts, from about 10 yards away, “Hey, Kauri, I have to talk to you about pickleball!”

“Sure, anytime!” McKendry shouts back.

McKendry then beams at her visitor at the table and says, “That woman has never played a minute of pickleball in her life, but you watch. She’ll be hooked on it as soon as she starts playing it. I’m telling you, pickleball is highly addictive.

More than 500,000 people in the United States have picked up pickleball since 2020, according to the Sports and Fitness Industry Association. If you’ve never heard the pock-pock-pock-pock sound of a pickleball rally, interrupted by rounds of laughter, it’s time to step outside and travel a few feet to listen to goings-on at one of the nearly 9,500 pickleball-enabled parks across the U.S.

“It’s played on a small court, it’s easy on the body, and it’s social,” says McKendry, a Lake Bluff resident who has served as Lake Forest High School’s frosh-soph girls tennis coach for 15 years. “So social. The 20 or so adults I’m about to see this morning will be close friends before they leave here today, guaranteed.”

A couple of local 60-something sisters wanted to surprise their 80-something father, Papa Bill, on Father’s Day this year. Ultra-fit Papa Bill loves to play pickleball and lives in pickleballmad Naples, Florida, the unofficial capital of pickleball in the U.S.

“They wanted to take pickleball lessons and then impress their father when he visited them in June,” McKendry says. “You know what? That’s exactly what they did. People start playing pickleball for all kinds of reasons. Some were ashamed of what happened to them, physically, during the pandemic. They were out of shape and looking for a new activity. Pickleball was that activity. People need to move. And you might as well have fun while moving.”

“Look at what my mom is doing.”

McKendry’s mother, Jan Keller, is 85 years old and teaches dance to people of all ages. A denizen of Waukegan and mother of nine with husband Nick, she has no plans of stepping away from her career as a dance instructor.

Kauri is the couple’s sixth-born.

“My mom’s best advice to me has been, ‘Always stay active,’ ” says McKendry, the mother of five—ranging from the age of 29 to 9—with husband Jon, whom she met when both worked for Baxter and married in 1991. “All nine of her kids were dancing the polka by the age of 10. She’s kind and humble and nonjudgmental, with a zest for life.

“I can’t think of a better role model for me than my mother, who continues to teach and loves what she does. Her love of teaching trickled down to me.”

McKendry grew up in Waukegan, thrived in a variety of sports, including baseball, and served as her family’s jokester and laugh riot. She played varsity volleyball and basketball as a student/ athlete at Carmel Catholic High School in Mundelein, before opting to battle in intramural softball at Illinois State University in Normal.

Her first post-college job was in sales at Motorola in Schaumburg.

Molly, McKendry says, has good eye-hand coordination and the potential to be a pickleball lifer.

“It’s a lot of work, raising kids,” admits McKendry, who somehow manages to find the time to play league softball for a team called the Bluffers. “But I’ve always loved it because it’s fulfilling. Keeping a sense of humor, I’ve always believed, is the key to being a good parent. Plus I like chaos and crowds in a household.”

McKendry didn’t start playing tennis seriously until the age of 25, when she showed up at the Racquet Club of Lake Bluff in “my hightop basketball shoes” and tried out for one of the club’s teams.

The ages of McKendry’s tennis students range from 4 to 80. Her pickleball charges? Eight to 85.

“Not too long ago, I saw an 8-year-old on a pickleball court with an 80-year-old,” McKendry says. “It was the cutest thing.”

This past spring, McKendry was in a Walgreens, looking for vitamins, when she ran into a woman she hadn’t seen in about 20 years.

“I heard this voice, ‘Kauri, is that you?’” McKendry recounts. “We got around to talking about pickleball. She admitted to me that she had a FOMO (Fear Of Missing Out) and wanted to give pickleball a try. I told her, ‘Me, too! I was you! Try it. You have to try pickleball.