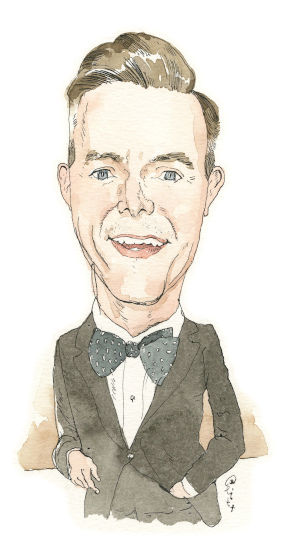 Andrew Hotz looked at his tablemates under the Memphis sky one night this year and couldn’t believe his good fortune.

A Winnetkan since 2020 and a part-time resident of Los Angeles, he was at a barbeque, surrounded by Presleys, at none other than the Graceland Mansion estate.

“You talk about a highlight in a career, a memory to cherish forever, that’s certainly one of mine,” says the 41-year-old Hotz, chief data strategist/EVP of Worldwide Digital Marketing for the Warner Bros. Motion Picture Group.

Some five years ago, the same Andrew Hotz found himself sitting on a couch in actor Bradley Cooper’s house. Hotz and a couple of colleagues had been invited there to view the movie A Star is Born—starring Cooper and Lady Gaga—months before its release date.

“Don’t think,” Hotz says, “that I get to enjoy moments like those all the time. It’s hard work, what I do. The pace of the digital marketing field is challenging and exciting, but it’s also faster than ever. It’s forcing us to change the way we work, constantly.

“You have to be nimble and you can’t be afraid to fail,” he adds. “If you fail, fail quickly— and learn quickly.”

A resounding success: the movie Elvis. Hotz oversaw Warner Bros.’ domestic and international digital teams and worked with marketing executives on the design and deployment of digital campaigns for the film, which, through July 24, amassed $210 million globally at the box office since its release June 24.

Now you know why Hotz had earned that invite to inhale food and imbibe outside the place that Elvis Presley called home for 20 of his 42 years.

Hotz entered the mansion shortly after the Cannes Film Festival in May to witness the production of a moving Elvis promo video featuring Austin Butler, the actor who portrayed the “King of Rock and Roll.”

“We had tried to get Austin to sit down at Cannes, in a quiet setting, and sing an Elvis song,” Hotz recalls. “But things didn’t work out in France. With our deadline fast approaching, we got Austin to try it again in the Jungle Room at Graceland. The woman in charge of the estate brought out one of Elvis’s guitars and handed it to Austin, who played ‘Can’t Help Falling in Love’.”

“Perfect,” Hotz continues. “Magical. I’m getting chills again, just thinking about it. Austin, whose performance in the movie was transformative, provided exactly what we wanted before the movie’s release.”

“I was mildly interested when I learned we’d be making a movie about Elvis,” says Hotz, who grew up in Flossmoor and La Grange and majored in theatre at Northwestern University. “But I became much more interested in it when I found out Baz would be directing it. It’s an awesome movie. It whirls you around, start to finish; that’s Baz’s storytelling style.

“In his movies,” Hotz adds, “Baz likes to include the significant events that had occurred in the world at the time. No entertainer better personified all that was going on the 1950s, 60s, and 70s than Elvis Presley did. You had the loss of innocence, with the assassinations of MLK and Robert F. Kennedy—their deaths devastated Elvis. And then you had the years of excess in the 1970s.”

Luhrmann, Hotz notes, received extensive feedback—all positive—from Priscilla Presley and the couple’s daughter, Lisa Marie. Too many previous cinematic depictions of Elvis had presented the icon as a caricature rather than as a human.

“Priscilla raved about the job Austin did, and she told Baz that Elvis would have loved the accurate portrayal, would have appreciated how responsible everybody was in the making of the movie,” Hotz says. “Priscilla also commented that the movie showed Elvis’s anger better than any other movie had. His anger… it’s palpable in several scenes.”

The movie’s soundtrack debuted at No. 1 on Billboard’s Soundtrack chart on July 6. Elvis was born 87 years ago.

But senior citizens aren’t the only ones watching and listening.

“We’re incredibly proud that Elvis has attracted so many young moviegoers,” Hotz says. Hotz’s father, Joe, is an economist, while his mother, Diane, has a background in teaching math. They live in Chicago’s Gold Coast Historic District.

“I’m the product of two analytical people,” says Hotz, who’s raising sons Leo, 9, and Eddie, 5, with his husband, Kevin, in the North Shore village that the family adores. “But I was pulled to a creative side and probably was the only student with an undergraduate degree in theatre to have earned an MBA (in finance) at Columbia University.

“Arts, especially theatre and music, have always excited me. I’m a Ravinia Festival junkie; last year I got overly excited, attending at least one concert a week at the venue.”

Walking distance from his Winnetka house to the beach continues to thrill Hotz. He’s a paddleboard fan, and a fan of watching his sons kayak.

“Beach time with the boys … it does not get much better than that,” Hotz says. “Winnetka is such a wonderful, tight-knit community, and we take full advantage of all that it has to offer. In L.A., we lived in a cul-de-sac, with five other families. A child in each of those families went to a different school. In Winnetka we can’t leave our house without running into a classmate of one of our children within minutes.”

Prior to joining Warner Bros., Hotz managed the relationship between Google/YouTube and NBC Universal as head of industry at Google and consulted with the studio and networks on digital marketing efforts, including media strategy, data and measurement platforms, digital creative, and partnerships.

His career in production began with a stint at DreamWorks Animation.

“The field of digital marketing gives us a limitless canvas to promote our movies,” Hotz says. “Instagram, TikTok, YouTube, 10-minute videos, social-media content that’s interactive. I could go on and on. Remember when people only found out about a movie through a 15-, 30-, or 45-second TV ad?”

“Mind if I say a few things about that movie?” Hotz says. “I can’t pass up the opportunity. It’s sexy and lively, with all kinds of twists. It’s the kind of movie that people, while leaving the theater, will say, ‘That’s why I go to the movies.’”