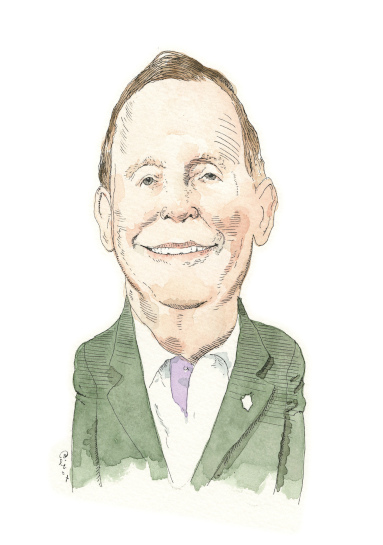 The golf bug bit Tom Kearney at Beverly Country Club in Chicago more than six decades ago. He was 11 and a first-year caddie, making $3.75 per loop.

Or about 21 cents per hole.

The primary casualty of what would turn out to be a lifelong passion was Kearney’s baseball glove.

“I was a Little Leaguer before I discovered the joys of golf,” the 75-year-old and longtime Lake Forest resident recalls.

Kearney has golf to thank for three of the most meaningful parts in his life: wife Susan, education, and career. A Brother Rice High School graduate at the age of 16, he attended the University of Illinois on an Evans Scholarship—a prestigious full housing and tuition college grant offered to high-achieving caddies with limited financial means—and met Susan at the Urbana-Champaign campus while serving as the head waiter at an Alpha Phi sorority gathering.

And the man, the late Tom Nessinger, who recruited Kearney to work for the accounting firm Arthur Andersen, owned a golf bag brimming with clubs that a young Tom Kearney carried around Beverly’s course.

“Outside of being a part of my immediate family,” Kearney insists, “the best thing that has ever happened to me was being named an Evans Scholar.”

What goes golf-glove hand in golf-glove hand with the Evans Scholarship Program is the Western Golf Association (WGA), of which Kearney has served as a director since 1990. The WGA organizes the Western Amateur Championship, and this year’s 120th edition of the third-oldest amateur golf tournament in the world will be staged next month in Highland Park at Exmoor Country Club—Kearney’s home club since 1978.

Reigning champion and Stanford University junior Michael Thorbjornsen, along with 155 other top-notch amateur golfers, will tour Exmoor’s iconic, Donald Ross-designed track August 1-6. Exmoor, with roots that date back to 1986, welcomed Western Amateur Championship fields in 1904, 1952, and 2012.

This year’s tourney begins with stroke play (72 holes, August 1-3, to determine the Sweet 16) and ends with match play, including semifinals and the final on Saturday, August 6. At least 400 Exmoor members will serve as volunteers during the six-day event.

“It’s such a grind for the golfers,” Kearney, a former Exmoor CC golf chairman and treasurer, says of the championship’s format. “But it’ll be a treat for the spectators. Our course is a classic layout. I’m a Donald Ross fan, because he designed challenging courses, including Exmoor’s, across topographies that don’t harbor contrived playing holes.”

Kearney, who’d often drive golf balls at Exmoor’s driving range before driving to work in Chicago, finished runner-up at an Exmoor Men’s Club Championship in the early 1980s, falling on the second playoff hole after he and the eventual champion finished with matching scorecards after 36 holes and parred the first extra hole.

“My opponent bogeyed the second playoff hole,” he says, with a halfsmile and full head shake. “What did I do? I doublebogeyed the hole.”

But he’s been an ace off the links ever since. The former Arthur Andersen tax manager and current partner with the real estate investment firm Moran & Company served a three-year term as president of the Daniel Murphy Foundation—it provides high school scholarship assistance and educational support to Chicago students from economically disadvantaged backgrounds—and was a 2021 Donald D. Johnson Lifetime Achievement Award honoree for his support of the WGA and Evans Scholarship Foundation.

“I love education,” says Kearney, a former Lake Forest Elementary School District 67 board member. “Education is the greatest equalizer in the world; it opens many doors for people. The wonderful mission of the Daniel Murphy Foundation is to look for inner city students who have that fire in the belly to succeed and then help them maintain that drive by backing them financially. We once raised $2.4 million in one day.

“The Evans Scholarship Program,” he adds, “is just as amazing. I’ve had the honor, and the pleasure, of interviewing Evans Scholarship candidates. They never fail to impress me, with their determination, their life stories, and their answers to my question, ‘What have you learned during your years as a caddie?’ ”

More than 11,500 young men and women have graduated from colleges as Evans Scholars. Nearly 1,100, including 14 Exmoor caddies, were enrolled in 21 leading universities nationwide during the 2021-2022 academic year. The scholarship program is named after Charles “Chick” Evans (1895-1979), who became an Exmoor member in 1909 and won the Western Amateur eight times from 1909-1923.

The WGA and Exmoor CC—a charter member of the WGA in 1899—have supported the Evans Scholarship Program since 1930. Exmoor members and event sponsors exceeded the club’s goal to raise $500,000 to support this year’s Western Amateur and to fund two more endowed Evans Scholars in the name of Exmoor.

And they reached the lofty goal in January—in record time.

Kearney played one season of Illini golf as an Evans Scholar and accounting major. Tom and Susan’s first date, a double date, started with a round of golf at a par-3 course near the University of Illinois campus and ended with dinner at a pizzeria.

Slices outside; slices inside.

Tom and Susan got married in 1969 and moved to Lake Forest in 1979. They raised two daughters, Erin and Melissa.

“We were the youngest people on our block in Lake Forest 43 years ago,” a chuckling Kearney says. “Guess what we are today?”

Kearney’s recollection of an Evans Scholarship Foundation interview also makes him laugh. The candidate had caddied at South Bend Country Club in St. Joseph Country, Indiana, where his loop boss for the day was then-Vice President Joe Biden.

“When I ask caddies what they’d learned while on the job, I usually get responses like, ‘Responsibility,’ ‘How best to talk with adults,’ and ‘Teamwork,’” he says.

“The young man who had caddied for Biden told me, ‘Never run behind the Vice President of the United States while holding a 9-iron. You’ll get tackled by Secret Service agents.’ ”

Exmoor Country Club is located at 700 Vine Avenue in Highland Park. For more information, call 847-432-3600 or visit exmoorcountryclub.org. Learn more about the Western Golf Association and the Evans Scholars Foundation at wgaesf.org.