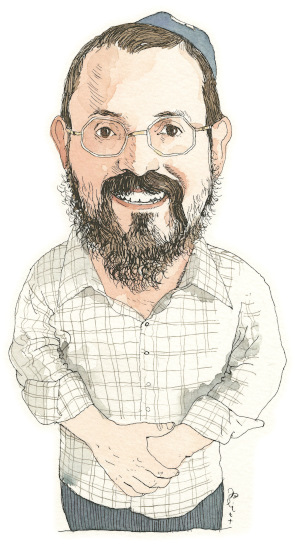 He stood outside his New York office on Sundays, greeting people for up to six hours in the late 1980s and early 1990s.

The late Rabbi Menachem Mendel Schneerson—a Russian-Empire-born American Orthodox rabbi and the leader of the international Chabad-Lubavitch movement, beginning in 1950—met thousands of folks each weekend.

And handed a dollar bill to each, with a gentle suggestion: “Donate this to a charity.”

“He still inspires me today,” Wilmette resident and Rabbi Moshe Teldon says of Schneerson, who died in 1994 at the age of 92. “He was a spiritual leader, a powerhouse, who lived about an hour from where I grew up (Long Island). You’ve heard of the negativity bias, right? Well, Rabbi Schneerson lived with a positivity bias.

“The idea behind the dollar giveaway,” the 35-year-old adds, “was, ‘When two people meet, it should bring benefit to a third.’”

Teldon, the program director at Fraida-Cameron Chabad Center of Wilmette, was thrilled about a first on the Third of July this year. That was when the Wilmette Park District offered a kosher food option to Independence Day Celebration attendees (on the day before July 4 this summer) at Gillson Park for the first time.

“Our push to make this happen started about four years ago,” says Teldon, the father of five daughters with wife and Wilmette native Esther Leah, whose parents, Rabbi Dovid and Rivke Flinkenstein, co-founded the Fraida-Cameron Chabad Center in their basement in 1992. “We’d pack our food every Fourth of July and head to the village’s celebration to enjoy the fireworks and face-painting and other offerings.

“We were making progress, while communicating and working with the Wilmette Park District, right before the start of the pandemic. It was meaningful, significant, what the park district did when it allowed us to find a local vendor for the holiday gathering. It wasn’t just a gesture; it was a big deal for Jewish folks.”

In late April, Teldon was informed by the park district that one of the event’s six vendors would get to offer kosher fare, including falafel and smoked turkey legs, on July 3.

“It’s a convenience issue, and we could not be more appreciative of the Wilmette Park District and the Village of Wilmette for their decision,” Teldon says. “I tip my hat to Steve and Jason. It’s a great testament to the village’s commitment to making all residents feel welcome and seen. There are lovely people in Wilmette, and it’s a lovely place to live. It’s an inclusive village, filled with kind people.”

Fraida-Cameron Chabad of Wilmette is a place where every Jewish person is welcome, regardless of affiliation or level of knowledge, per its website (chabadwilmette.com). Its goal is to create a warm environment to explore and experience “our heritage” in a nonjudgmental and inviting atmosphere. The center offers welcoming services, thought-provoking classes, and interactive social programming.

Its mission is to reach out to others with acts of goodness and kindness. The nonprofit’s efforts are rooted in traditional Jewish values, with many of its programs assisting the needy regardless of background or belief.

“Chabad is one of the most dynamic Jewish movements,” says Teldon, who attained Rabbinical ordination at the Central Yeshiva Tomchei Temimim in Brooklyn, New York, and has served as a volunteer of Jewish community work in Ireland, Poland, and Nepal and spent summers working in Jewish camps in the United States and Israel. “Centers like ours (35 in Illinois, nearly 5,000 worldwide) seek to create community, to be there for others, to be present.

“There’s a Yiddish word, heimish, that means ‘feels like home,’” he continues. “That’s the vibe we strive to have here at all times. No judgment, help people grow, and do what we can to make the world a better place.”

Trained in the cantorial arts and a chazzan who leads congregations in songful prayer, Teldon is a son of a New York rabbi (Tuvia) and a musician (Chaya, who sings and plays three instruments). Two of his siblings are rabbis as well, and his sister, a children’s book author, married a rabbi.

“Grandpa Gerry,” Teldon says, “is the one you should be writing about, not me.”

In January 2012, Moshe and Esther Leah got married in an outdoor wedding (“It was, shockingly, 60 degrees that winter day after I’d been bracing for considerably colder temperatures,” Moshe recalls) and joined the Fraida-Cameron Chabad Center of Wilmette team in 2013, with a focus on youth and programming. They had met in New York through mutual friends.

“And I followed her to Chicago,” Moshe says.

Their daughters are Chana, 9, Shaina, 8, Menucha, 6, Moussia, 5, and Bracha, 2. The youngest once entered the sanctuary while her father was leading a service.

“Fatherhood? I love everything about it,” says Teldon, who also loves to read (history and business books, mostly) and listen to music. “Taking care of five daughters, that’s pretty much a full-time job for both of us. But they’re all still bundles of joy, and it’s exciting for both of us to instill a vision and values and help them navigate life.

“My favorite part of the day is coming home and being tackled by all five of them.”

Can you hear the thud?

Can you hear the giggles?