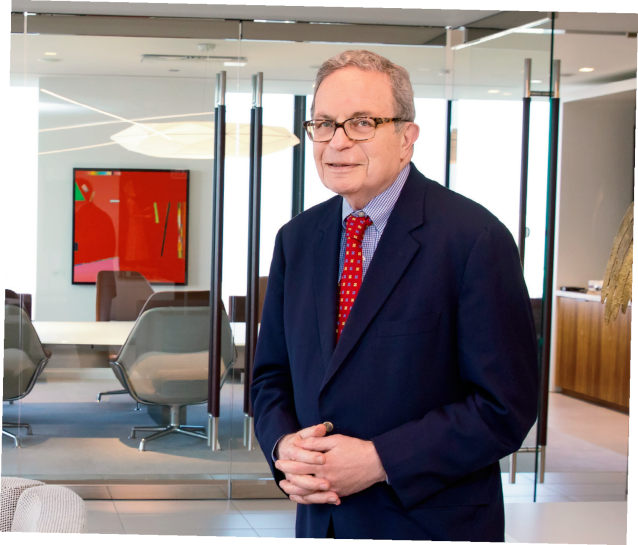 Dentons Senior Counsel Linda Chaplik Harris hoped for one thing whenever she’d drive esteemed colleague Donald G. Lubin from their law office in Chicago to his home in Highland Park.

“It elated me when we had to endure it, because that meant I’d get to spend more time listening to Don tell his wonderful stories, ones filled with vivid details,” recalls Harris, who has worked for the global firm Dentons (formerly Sonnenschein Nath & Rosenthal) since 1976.

“After we got off the ramp on our drive, I’d even slow down to make sure we’d hit as many red lights as possible. I treasured every minute of every commute home with Don.”

Lubin’s remarkable, impactful life—as a loving father of four and the spouse of the former Amy Schwartz for 66 years, as Dentons’ second chairman, as a consummate lawyer and mentor, as a humble titan in philanthropy, and as the eulogist at the funerals of at least 15 non-relatives—ended at his home on June 5.

Lubin’s humility was legendary, though he never would have characterized it as so. But Harris has, and Lubin manifested the trait during his 90-minute State of the Firm address at Sonnenschein’s inaugural partners retreat in Chicago.

“Don had recently been named chairman and asked me to help plan the retreat, to put the programming of the event together,” Harris says. “In his speech he mentioned numerous new clients, litigation victories, and deals that had been closed in the year. But he never mentioned any of his clients, any of his cases, any of his deals. Instead, Don—our firm’s principal rainmaker—used the retreat as an opportunity to highlight the work of the firm’s other partners. It was amazing.

“I’m sitting there, thinking, ‘There’s a lesson here.’ He was the most humble man you could ever meet. You can’t talk about Don Lubin without being stunned by how humble he was.”

Born in Brooklyn, New York, and a graduate of the Wharton Business School of the University of Pennsylvania, Lubin met his future wife when he was in his first week at Harvard Law School and Amy was a Wellesley College student.

The couple relocated to Chicago in 1957, when Lubin accepted a position as an associate at Sonnenschein, and they moved to the first of their two Highland Park houses in 1962. Their second abode was used to film scenes in the 1992 movie Prelude to a Kiss, starring Alec Baldwin and Meg Ryan.

“My father loved routine, especially in the early years of his law career,” says Tom, who was a lawyer for three years before choosing to become an entrepreneur in 1992. “My mom would drive him to the Highland Park train station every workday so he could take the 8:08 a.m. train to the city, and then she’d pick him up every night at 6:18 p.m. The only time he broke that routine was when my sister, Alice, attended Elm Place School, and he walked her to middle school every morning before heading to the train station to catch the 8:08.

“Alice’s music teacher, Mr. Reed,” he adds, “even gave Alice extra credit when he noticed that Alice walked with her dad to school every day.”

Don Lubin served as the personal attorney for several business heavyweights, including McDonald’s Founder Ray Kroc. Lubin was elected to the McDonald’s Corporation Board of Directors in 1967 (and was its longest serving director), had a founding role in Ronald McDonald House Charities, and guided that nonprofit as a trustee for nearly 40 years. He also counseled boards of directors and senior management of private and public companies, including Allstate, Molex, Sealy, Sears, Serta, and WW Grainger.

And Lubin was an integral leader behind the establishment of Legacy Charter School (pre-K through eighth grade), located in the Chicago neighborhood North Lawndale. Sonnenschein/Dentons founded the school to mark the occasion of the firm’s centennial anniversary.

“I never looked at Don through a single lens,” says Dentons Global Corporate Practice Chair Mike Froy, in his 39th year with the firm. “Don was a lawyer who made a difference—he brought something special to every matter he handled. He not only dedicated himself to his clients, his firm, and his colleagues, but to countless charitable and civic causes as well. Still, nothing meant more to Don than his family.

“Words that come to mind, when I think of Don, are integrity judgment, loyalty, commitment, trust, humility, fairness, and selflessness. While he had a commanding presence, those who knew him well appreciated his wit and sense of humor.”

Only one Dentons employee was surprised when the firm created the annual Lubin Award in 2017, two years before Lubin retired. The startled employee? Lubin himself. The award honors a colleague who embodies Lubin’s high standards, selflessness, and passionate dedication to the practice of law.

“Don,” Harris says, “wasn’t just a brilliant lawyer. One of his many other strengths was his soft spot for people—making people feel good and that they mattered. What I remember most about the first day I met Don was his warmth; he was non-threatening. Our firm has been known for its inclusiveness for decades because Don advocated for women in the field of law.

“He introduced women lawyers to clients in much the same way he dealt with male lawyers,” Harris continues. “He’d give great thought to people he believed would have common interests and ‘chemistry.’ His success in matching firm lawyers with clients was evident by the decades-long relationships that resulted from his introductions.”

The survivors of deceased clients, colleagues, friends, CEOs, mentees, and others who had been blessed to have known Lubin were treated to eulogies delivered by Lubin.

“He probably gave more eulogies than some priests and rabbis,” Tom says. “It speaks to how revered he was to so many. A couple of years ago, I asked Dad if he could help me write his own eulogy. It was the only time he refused a request to celebrate someone’s life.

Don Lubin’s survivors, in addition to his wife and four children, include eight grandchildren.