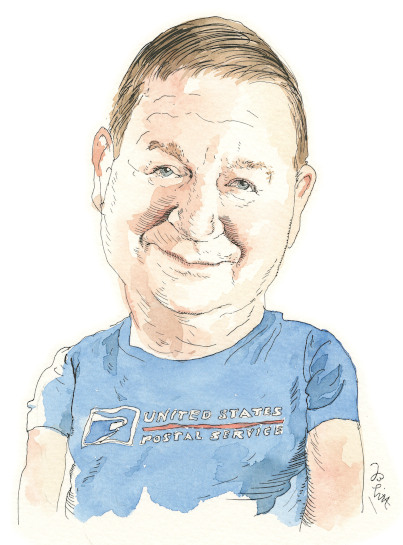 Highland Park mailman Dave Plucinski walked his route for the final time on June 30, and the numbers are in, none more eyeopening than the final one.

34: Years Plucinski, 65, was employed by the United States Postal Service.

60: Weight, in pounds, of a dog-food bag he delivered.

8: Bottles of water he drank during a workday in mid-June, when the temperature soared to 96 degrees but felt like 196.

65: Typical number of hours he worked each week.

0: Times a dog bit him since he approached a mailbox, in a USPS uniform, for the first time in 1988.

Chew on that oddity for a bit.

“I know, I know—that’s pretty strange, highly unusual, for a mail carrier, isn’t it?” Plucinski, a Mundelein native and resident, says in between sips of his ninth bottle of water on that sweltering day, this time inside an air-conditioned Starbucks not far from his house. “You’d think at some point, given the number of years I’ve been doing this, that a dog would’ve attacked me. I have two weeks left … hope I didn’t just jinx it. I heard a dog bit one of our postal workers just last week. I’ve played with dogs on my route.

“I love all dogs. I’ve returned stray dogs to their owners on my route.”

And yet he never had to wince, not even once, because of a canine’s nip.

But Plucinski left quite a mark on the folks who relied on him to deliver the mail Monday through Saturday for more than three decades. Why else did they throw a block party, featuring an ice cream truck, for him on June 27? Why else did his rabid fans, many of whom reside in the Burr Oaks neighborhood, secure a proclamation—

“In Recognition of the Retirement of Dave Plucinski”—by Highland Park Mayor Nancy Rotering?

Plucinski’s humble reactions to all of the well-deserved fuss range from “Why all the fuss?” to “I just did my job and enjoyed it the whole time.”

The demanding job took its toll on the 1975 Mundelein High School graduate, who worked a couple of positions at a hometown grocery store before joining the USPS at the age of 31. Plucinski deals with knots in his back and shoulders and discomfort in his right knee. But he shrugs all of the maladies off, attributing each to a comes-with-the-territory issue.

“It’s pretty cool, being on a first-name basis with as many people as I have been in this job,” says Plucinski, who married his high school sweetheart, Sharon, in 1980; she plans to retire next year from her office manager job in Mundelein. “Most interactions I have with people on my route last 10 seconds. But many go beyond that, and I enjoy that time before heading to the next house. I got to see kids grow up, get married, and then move back to Highland Park. I know grandparents’ names and dogs’ names, of course.

If you’re wondering which burg he knows better, Highland Park or Mundelein, it’s the former—and he’s called Mundelein home since the day her uttered “envelope” for the first time. Ask him anything about a house for sale in Highland Park, and he’d be more than happy to share his thoughts about the property with you.

Plucinski had the same Highland Park mail route in the last 29 years, after “moving around” in his first five years.

“I was nervous,” he recalls.

In recent years he’d drink coffee and have oatmeal and a banana for breakfast, before arriving at work—shod in his comfy New Balance kicks—to start sorting at 8 a.m. He’d make his first delivery at 10 a.m., and consume an energy bar, fruit, and a sandwich (not all at once) during the afternoon segment of his day.

An eight-hour workday turned into a 10-, an 11-, or a 12-hour workday when he had to take care of portions of a vacationing colleague’s route.

“People are surprised when they hear United States Postal Service carriers also deliver for Amazon and UPS, but that’s what a lot of us do,” Plucinski says, adding the USPS, like countless other employers, is short-staffed. “It’s not always easy, delivering a case of bottled water in a box. Those bags of dog food can be pretty heavy, and I once delivered barbells to a resident.”

The only fairly heavy lifting he might do in retirement would involve the youngest of his four grandchildren. Son Steven is the father of 3-year-old Easton; daughter Stacy is the mother of Gavin, 5, Owen, 7, and Dylan, 9.

All of Stacy’s children play baseball.

Dave Plucinski played baseball in his youth, too, as well as basketball and practically every other sport under the sun and arena roofs.

“I was never good at any of them,” he insists.

Easton, the 22nd most popular name for a newborn (according to FamilyEducation.com), also happens to be the name of a Thousand Oaks, California-based company that manufactures baseball and softball bats, ball gloves, apparel, bags, batting gloves, helmets, catcher’s equipment, and related accessories.

“I’m going to take it easy and spend more time with our grandkids,” Plucinski says of his post-Post-Office years.

He won’t have to worry about keeping his 20 digits warm during the next polar vortex or protecting his skin when Highland Park turns into a Midwest version of Miami in July again.

But Plucinski will have to do all he can to quell an umbrella-wide smile whenever it’s raining cats and … dogs.