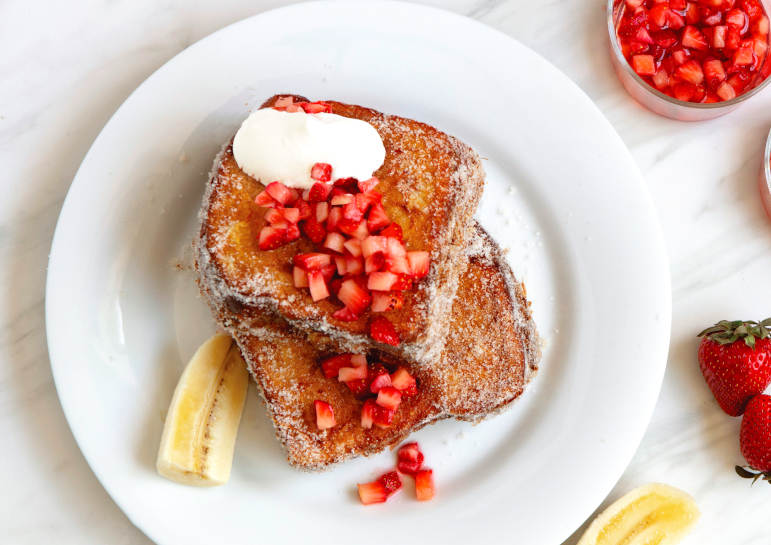 Since debuting in 1971 at Disney’s Polynesian Resort, Tonga Toast—a cinnamon-sugared chunk of flash-fried, banana-stuffed breakfast bliss—has always been a top seller. Michael Thompson, a Polynesian Resort chef for seven years, can’t give out exact sales numbers, but sums: “Let’s just say we receive our bananas by the pallet load!”

To make the dish, cooks tuck bananas into thick slices of sourdough bread dunk the stuffed bread in egg wash, flash fry it until golden and then dip in cinnamon sugar. Served with strawberry sauce and choice of breakfast meat, “Tonga Toast is a “Wow!” item that now has a legacy following,” says Thompson.

When they first shaped the dish, Thompson says Disney chefs tried stuffing the toast with marinated peaches, mango slices, and other fruits, “But bananas won out.” Individual chefs over the years have put their own spin on the dish—adding banana liqueur to the batter, for example. But the recipe below is the standard.

NOTE: We’ve made this with fresh baked homemade bread in the past, but it works very well with a bakery loaf of brioche—much easier!

Preheat oil in deep-fat fryer to 350 degrees. Mix sugar and cinnamon together in a shallow dipping bowl large enough to fit a slice of bread. Set aside. Whisk eggs with milk in a second shallow dipping bowl. Set aside. Mix strawberries with 1/2 cup sugar. Let rest for 15 minutes. Peel each banana. Slice each banana in half at the middle; slice each half into halves lengthwise. You should now have 12 banana pieces: two for each stuffed toast serving. Slice 1/2-inch off each end of the loaf and discard. Slice remaining bread into six, 2-inch slices. Cut a slit into the side of each slice; pull out a bit of the interior bread to make a little space for the two banana pieces. Insert two banana pieces into each hollowed sliced of bread. Dip stuffed bread into egg wash on both sides. Deep fry at 350 degrees for one minute: turn toast over and fry for another minute. Remove fried toast to a paper-towel-lined platter. Dip finished toast in cinnamon sugar to coat. Repeat process until all bread is fried and sugared. Serve toast with macerated strawberries and a dollop of yogurt.